Tarek Fatah, a popular figure among the Indian right-wing with a Twitter following of nearly seven lakh, is a prolific peddler of fake news that aims to harden negative stereotypes about the Muslim community.

Fatah, a Pakistan-born Canadian columnist and author, has kept fact-checkers busy by tweeting out of context videos to show Muslims as regressive and violent.

Despite his long track record of peddling incendiary fake news, which often includes violence, he has not been suspended from Twitter where he has a verified blue-tick badge.

BOOM reached out to Twitter India to ask whether it will take action against Fatah's account. The article will be updated upon receiving a response.

In his latest tryst with fake news, he tried to pass off an old video of a protest rally in Dhaka, Bangladesh as Kolkata, West Bengal.

BOOM debunked the same false claim earlier in the week and found that the rally was organised by a far-right political party in Dhaka (Bangladesh) in 2017 against the torture and killing of Rohingyas in Myanmar.

Read here: Video Of Protest In Bangladesh Passed Off As West Bengal 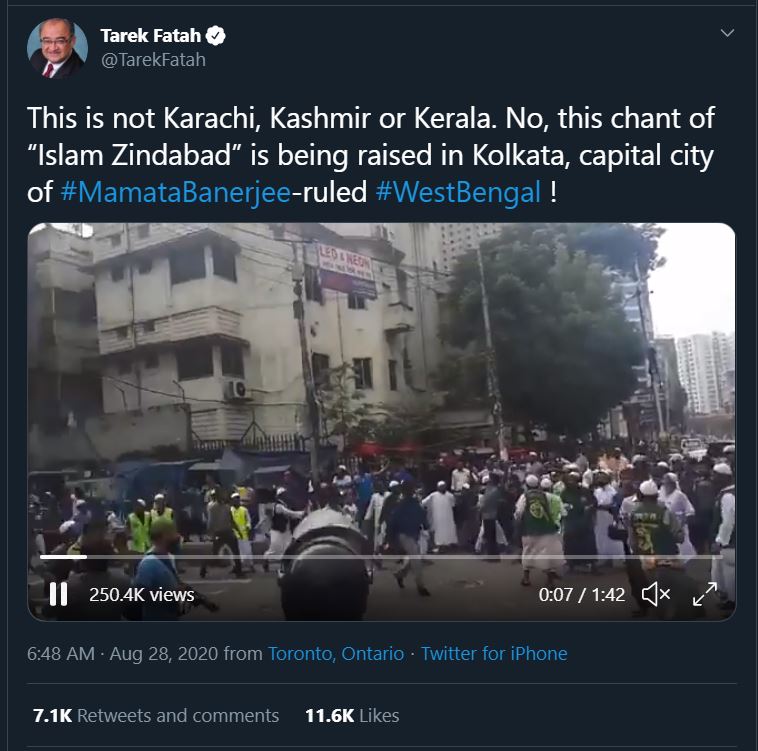 Kolkata Police too called out Fatah's tweet and said legal action was initiated.

#FakeNewsAlert
A video clip from Bangladesh is being falsely claimed to be from Kolkata. Legal action initiated. pic.twitter.com/v5MYLICKiI

Fatah later deleted the tweet and apologised stating he was given 'wrong information'.

Yesterday I tweeted about a protest march that I was made to believe took place in Kolkata.

It turns out I was given the wrong information. The protest march was held in Dhaka, not Kolkata.

I have therefore deleted that Tweet and would like to apologize to you for my mistake. pic.twitter.com/yERQaS7rGB

A rare admission from the man who has not deleted blatantly false tweets despite being called out several times. A scan through his account shows his long history of peddling communally-charged misinformation. Below are 10 such examples.

2. Revived A 2012 Video Of A Mob Setting Fire To A Church In Pakistan

In April, Fatah tweeted an eight-year-old video showing a mob set fire to a church in Pakistan tweeting, 'scenes from Pakistan'. BOOM had found that the incident occurred in September 2012 when a mob set a church and school on fire in Pakistan's Khyber Pakhtunkhwa area to protest against a film.

BOOM found that the video is from 2012 when protesters set a church and school on fire in North West Pakistan to protest against a film.https://t.co/F0FdrE2Vgs @TarekFatah https://t.co/soKUuKogm3

Read: :2012 Video Of A Mob Setting Fire To A Church In Pakistan Revived

3. Peddled A Scene From Movie As A Pakistani Woman Refusing Vaccines For Her Children

In January, he tweeted a video showing a woman behave rudely with a group of health workers who were on a door-to-door polio vaccine administration campaign.

Fatah tweeted the video claiming that it was a real incident, where a Pakistani mother had slammed the door on the faces of two Polio workers. 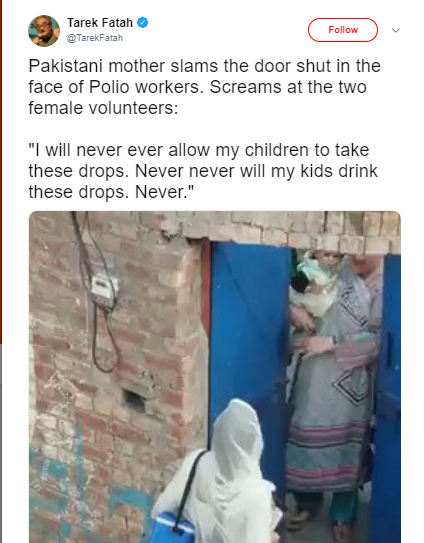 Pakistani actress Mehwish Hayat replied to Fatah saying that the video was a scene from her movie 'Load Wedding'. Hayat said the polio worker in the scene was her and the women playing the role of a mother is an actress.

Thank u for giving ur 2 cents on this but pls first verify the source b4 posting next time. It's a scene frm my movie"loadwedding",the polio worker is me & that woman an actress.Through the film we were raising awareness of the issue.Glad 2 see our performances were so convincing https://t.co/ididoJJcxL

In March, Fatah tweeted screenshots of a tweet that called for 'butchering Hindus', from a fake account pretending to be a Muslim correspondent with Al Jazeera and also pretended to have worked with The Wire, in the past. Both Al Jazeera and The Wire rubbished the claim that the person behind the account was in any way connected to them. A fact-check showed that the pattern of tweets and retweets suggested the individual behind the account was pro-right leaning and did not appear to be a Muslim. In this case too, Fatah has still not retracted his tweet.

"Massacre those who insult #Islam"

Meet @DilawarShaikh_ "correspondent of @AlJazeera" in Cardiff, Wales and is "inspired by @RanaAyyub."

Shaikh wants to "start butchering #Hindus," bcoz "only then they [Hindus] will learn a lesson."

5. Fatah Tries To Pass Off A Video He Tweeted In 2017 As Anti-CAA Protests

During protests in January this year against the Anti-Citizenship (Amendment) Act 2019, Fatah took a sarcastic jibe at Muslim women who were leading the protests at Delhi's Shaheen Bagh and tweeted a video of women in burqas dancing.

Fatah had tweeted the same video in August 2017 with a different caption.

After being called out by BOOM and several Twitters users who pointed out his old tweet with the same video, he deleted his tweet from 2017 but let the recent tweet remain. 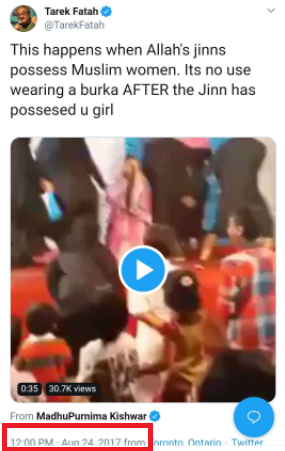 6. Screengrab From Video Of Relief Aid To Riot Victims Shared As Shaheen Bagh Women Being Paid

An image from a viral clip showing a queue of women and children accepting cash from men in a narrow alleyway, a trademark of interiors of Delhi was tweeted by Fatah with the caption claiming, "This video from #ShaheenBagh in Delhi speaks for itself."

BOOM found that the viral video is from a relief distribution drive in Old Mustafabad, Delhi that was held on February 28, 2020.https://t.co/8s8UJAjhvh

BOOM had found that the viral video was from a relief distribution drive in Old Mustafabad, Delhi that was held in February this year when parts of North East Delhi were severely affected by a communal riot.

#ShaheenBaghTruth
The #fake video which claimed women of #ShaheenBagh are paid debunked! The video actually shows the huge generosity of people in Babu Nagar towards those who have lost their homes in Shiv Vihar. We salute Shehzad bhai and his team #DelhiPogrom #DelhiRelief pic.twitter.com/3vQklBmGKh

An old video from Udaipur, Rajasthan showing a rally where Muslim men can be heard raising provocative slogans to protest the gruesome murder of migrant labourer belonging to the community was quote tweeted by Fatah and falsely linked to the Delhi Assembly polls at the time.

False. This incident happened in Udaipur, Rajasthan and not Delhi. The rally was held by Muslim communities in Udaipur to protest against Shambulal Regar, who brutally murdered Mohammed Afrazul, a Muslim labourer. Read more here 👉https://t.co/bdIZLsMuzR https://t.co/Ez7LEwUMaY

8. Tragic Death Of Pregnant Elephant In Kerala Shared With Bigotry And Disinformation

When a pregnant elephant in Kerala accidentally died by eating an explosives-laden fruit meant to scare away wild boars, a section of netizens in India gave the tragic incident communal hue by blaming the district's Muslim population. Fatah falsely claimed that explosives were deliberately fed to the animal in Malappuram district - which has a sizeable Muslim population.

The atrocity of feeding a pregnant elephant with pineapple full of firecrackers & killing her, took place in the Mallapuram district of India's Kerala State. The district is the only Muslim-majority district of the state with an over 70% Muslim population.

What are the chances? pic.twitter.com/JWg7DUWizm

BOOM spoke to forest officials and learnt that the animal most likely died after accidentally eating something with an explosive and that the incident took place in Palakkad district and not Malappuram as was incorrectly earlier reported.

A viral video clip of a woman mercilessly thrashing a minor child in Jammu's Kathua region was shared by Fatah in November 2019, falsely claiming that the incident took place in Pakistan.

BOOM had found that the video is originally from Nagari area of Kathua where a man secretly recorded his wife thrashing their five-year old daughter. 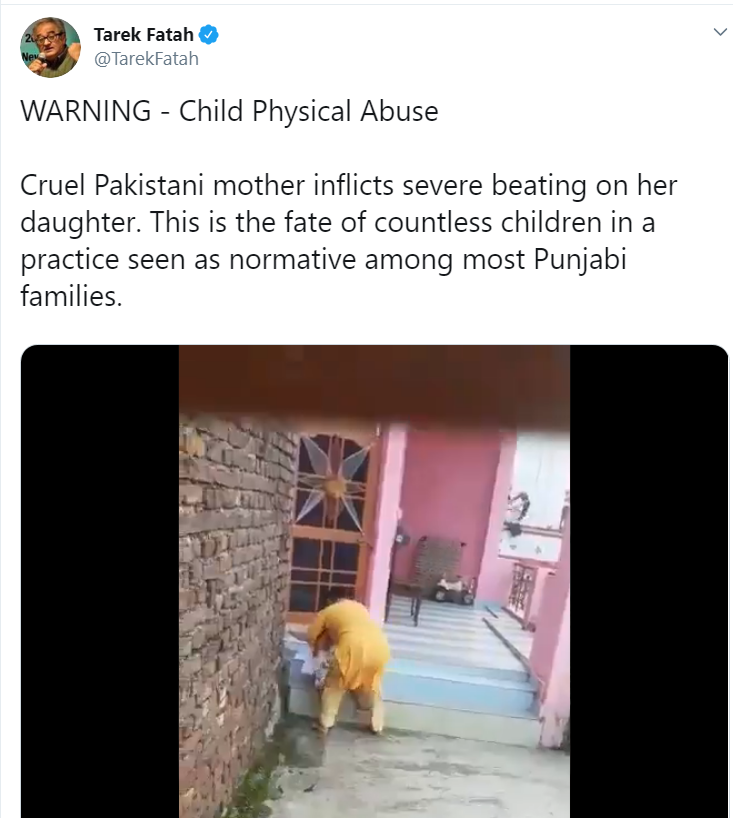 A video from Pakistan showing a frenzied group uprooting plant saplings and waving black flags was peddled by Fatah falsely claiming that the men were doing so as the mob felt planting trees is against Islam.

BOOM had found that the incident took place on August 9, 2020, at Khyber Pakhtunkhwa, Pakistan where angry locals uprooted saplings as a mark of protests as the saplings were reportedly planted over land where the ownership was in dispute.

Which begs the eternal question:
How does one country produce so many rectums? Just how does Pakistan do it?
pic.twitter.com/ADNkdmvrR9

Tarek Fatah Fake News FactCheck Communal spin Viral Video Twitter Twitter India Kolkata Police West Bengal Pakistan Canada Hindu Muslim Communal Spin Islam
If you value our work, we have an ask: Our journalists work with TruthSeekers like you to publish fact-checks, explainers, ground reports and media literacy content. Much of this work involves using investigative methods and forensic tools. Our work is resource-intensive, and we rely on our readers to fund our work. Support us so we can continue our work of decluttering the information landscape. BECOME A MEMBER
📧 Subscribe to our newsletter here. 📣You can also follow us on Twitter, Facebook, Instagram, Youtube, Linkedin and Google News 📝Stay updated with all our latest fact check stories.