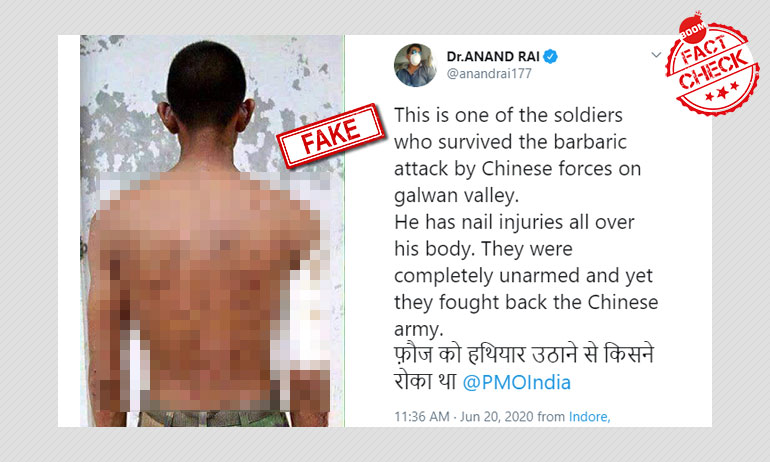 An old and unrelated photo showing a man's severely injured back is being shared with the false claim that it shows an Indian Army soldier injured during the recent clash between Indian and Chinese troops at the Line of Actual Control (LAC) in Galwan valley, Ladakh on June 15, 2020.

The recent face off between the two countries led to the death of 20 Indian soldiers. While China's People Liberation Army too is said to have suffered casualties, China has not released any official word on the same.

The image was tweeted by Dr. Anand Rai, known for being one of the whistleblowers of the Vyapam scam in Madhya Pradesh. Rai tweeted with the caption, "This is one of the soldiers who survived the barbaric attack by Chinese forces on galwan valley. He has nail injuries all over his body. They were completely unarmed and yet they fought back the Chinese army."

This is one of the soldiers who survived the barbaric attack by Chinese forces on galwan valley.
He has nail injuries all over his body. They were completely unarmed and yet they fought back the Chinese army.
फ़ौज को हथियार उठाने से किसने रोका था @PMOIndia pic.twitter.com/7yZ3EwiDDq

We searched with the caption on Facebook and found the image shared with the same false claim.

Also Read: No This Photo Is Not Of Indian Troops Killed In Galwan Valley

We performed a reverse image search using Yandex, a Russian search engine which showed results dating back to 2016.

The same image had been used in articles on several websites including Indonesian, Malaysian, and Thai.

The blogs on which the viral image was used on were mostly about rigorous training an aspiring soldier has to undergo in army camps. BOOM could not independently verify the image or where it is from, however we could establish that the image is not recent and is not related to the recent border clash between India and China.

BOOM has debunked several pieces of misinformation post clashes between Indian and Chinese troops in the Galwan Valley in Ladakh on June 15-16. Read the thread below.

#Thread🚨: Post clashes between Indian and Chinese troops in the #GalwanValley in #Ladakh on June 15-16, BOOM has fact-checked several posts which include images, videos, and msgs that included misinformation and had gone viral. See the thread below 👇 #FakeNews #India #China

Also Read: No, Video Does Not Show Col. Santosh Babu Arguing With Chinese Soldiers At Galwan