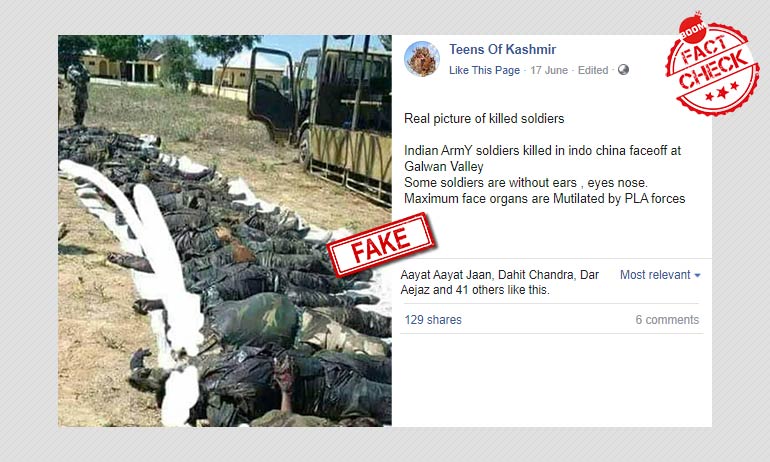 An image purported to show the bodies of Indian soldiers who were killed while fighting the Chinese troops in the Galwan Valley in Ladakh on June 15 is old and unrelated. BOOM was able to trace the image online to 2015. The photo has been used previously in the context of reporting about 105 Nigerian soldiers, who were reportedly killed in an ambush by the Boko Haram Islamist extremist group, that operates in the area.

The photograph shows decomposed bodies of slain soldiers placed in the ground. The faces of the soldiers who laid their lives have been blurred.

There were major escalation of border tensions between the Indian and Chinese troops at the Line of Actual Control (LAC) in the Galwan valley region of eastern Ladakh on June 15. According to reports 20 Indian soldiers lost their lives in the clash. Casualties from the Chinese side are not known yet. The image is viral with a narrative that stems from reports which suggest that the People's Liberation Army (PLA) assault troops brutally attacked the Indian soldiers with iron rods and batons wrapped in barbed wires.

One such post claims that the bodies are beyond recognition, after the attack. It is captioned as, "Real picture of killed soldiers. Indian Army soldiers killed in Indo China faceoff at Galwan Valley. Some soldiers are without ears, eyes and nose. Maximum face organs are mutilated by PLA forces."

The archived version of the picture can be seen here and here.

The photograph is viral on Twitter as Indian soldiers killed after the Galwan valley clash.

BOOM ran a reverse image search on the photograph and found the same image, which was published in a blog called The Time Press Africa in 2015. According to the blog, the photograph is of slain Nigerian soldiers who were abducted and killed in an ambush led by the Boko Haram, an Islamist terrorist organisation, operating from the northeastern part of Nigeria. 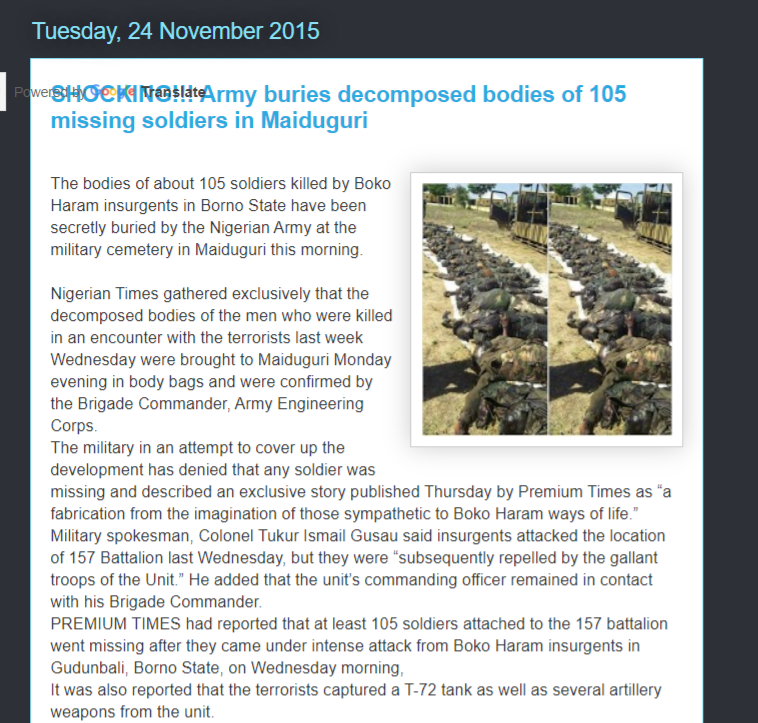 The same was corroborated by a Nigerian news outlet, The Biafra Times, which used the same image to critique the government for the incident. According to the report, the regiment went on an armed operation but was captured and executed by the Boko Haram. The bodies of the reported 105 soldiers from the military were then reportedly left to be decomposed.

An excerpt from the report reads, "In the history of Military combat, it has never been on record that a military regiment went on an operation with all weapons of military warfare only to be captured and completely wiped out and all their weapons captured by the enemy forces without any form of resistance, without firing a shot or inflicting one single casualty on their enemies. But such is the case with at least 105 soldiers attached to the 157 Task Force Battalion who are purported to have gone to engage the Boko Haram terrorist..." The report stated that the incident occurred at Gudunbali, Borno State, on November 18, 2015.

BOOM however, cannot independently verify the origin of the photo but can confirm it is several years old and not related to the India-China clash that took place in Ladakh in June this year.

On November 19, 2015, the Premium Times Nigeria reported about the feared missing of 105 soldiers in the ambush.

Later, the Nigerian army confirmed to the news outlet about the deadly gun battle between the Boko Haram group and 157 Battalion that led to the missing of several soldiers.

In December, 2015, the Human Rights Writers Association of Nigeria (HURIWA) demanded a probe of the alleged secret burial of the 105 slain soldiers by the Nigerian army at a military cemetery.