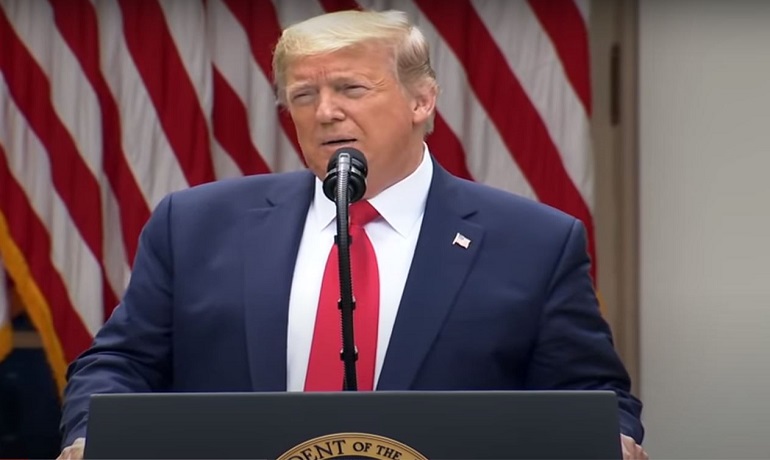 US President Donald Trump announced that the United States of America was breaking relations with the World Health Organisation (WHO) by ceasing all funding to them at a press conference on developments on US policy towards China in the White House on May 29 (local time). Data shows that the US is the largest contributor to the WHO, giving the organisation more than 15% of their financing.

President Trump also announced that the US would take steps to secure university research funding from going towards activities against US interests. He further issued a proclamation banning certain sections of students and non-immigrants from China from entering the United States.

Further, as the protests in Hong Kong continue, president Trump announced that the US would consider sanctions against Hong Kongers and Chinese officials. He also announced that US would take steps to roll back all commercial preferential treatment given to Hong Kong, and would examine the access of certain Chinese controlled companies to US securities markets.

Of late, Trump accused China of influencing the WHO to conceal the true origins of the coronavirus outbreak originating in Wuhan, leading to the ongoing COVID-19 pandemic. The US also penalised China for interfering into Hong Kong's security. While Hong Kong is a part of China, it is governed by a separate administration as a special administrative region under the "one country, two systems" principle since 1997.

Here's a roundup of Trump's announcements

1. US ends relations with the WHO

The US will be stopping its relationship with the WHO, Trump said, citing China's influence over the body and lack of implements of the reforms suggested by the US. "We will be today terminating our relationship with the World Health Organsation, and redirecting those funds to other worldwide and deserving urgent public health needs."

Earlier in the speech, he cited China's 'cover-up of the pandemic', and how the 'WHO was complicit (under its influence) to make this happen'. "China has total control control over the World Health Organisation, despite only paying 40 million dollars a year, compared to what the United States has been paying, which is approximately 450 million dollars a year." He added, "The world needs answers from China on the Wuhan virus."

The US is the largest contributor to the budget of WHO. We found from the World Organisation Data that the US had contributed a total of $893 million in 2018 - 2019. Of this $236.9 million were assessed dues, while the remaining $656 million were paid for by voluntary contributions. These contributions were 15.18% of the WHO's budget.

China contributed $85.98 million during the same period, contributing 0.21% of the WHO's funding.

This data can be found here.

2. Banning certain Chinese students from entering the US

The White House issued a proclamation prohibiting the entry of certain non-immigrants from entering the US from China who are linked to the Chinese army (or the Peoples' Liberation Army). According to the proclamation, China is using postdoctrate and postgraduate students in US to obtain sensitive technology and intellectual property to bolster its military ambitions.

Therefore, the US has now banned the entry of students at the postgraduate and postdoctoral levels from China into the US who receive funding, are employed, studies or conduct research at entities that support such Chinese endeavours, which the US refers to as China's "military-civil fusion category".

The Department of State would be responsible for the implements of this proclamation.

Trump said that China's corporation was not playing by the same rules, and investment firms should not be subjecting their clients to hidden and undue risks posed by such behaviour.

"I am instructing my presidential working group on financial markets to study the different practices of Chinese companies listed on the US financial markets with the goals of protecting American investments," President Trump said in the presser.

President further reiterated that the recent interference by China with its surveillance machinery made it clear that Hong Kong is not sufficiently autonomous to warrant the special treatment provided to the region by the US.

"I am therefore directing my administration to begin the process of eliminating policy exemptions that give Hong Kong special treatment," he said. It would span agreements on dual use of technology, to extradition and to export controls.

The US treats Hong Kong as a separate entity from mainland China under the 1992 United States - Hong Kong Policy Act. This special status prevented a lot of damage caused by the US-China trade war from spilling over into Hong Kong. The US has a special customs territory with Hong Kong, with the city being one of the US' biggest export markets and having zero tariffs on US imports (source).

Earlier, on May 27, Secretary of State Mike Pompeo said that Hong Kong is no longer autonomous from China, in the clearest indication that this step was on its way.

The US will also issue a renewed travel advisory to Hong Kong, which reflects on the growing use of surveillance and punishment by China in the city. Some Chinese and Hong Kongese officials,involved in eroding Hong Kong's autonomy, will also be subject to US sanctions.

Details of these sanctions are awaited.

These announcements can be heard below