A purported list of immigration restrictions imposed by the Taiwanese Justice Ministry on "Hong Kong citizens" has been shared repeatedly in multiple Facebook and Twitter posts in June 2020. The posts claim Taiwan will only accept immigration applications from those with "immediate family in Taiwan" or who are "professionals" or "significant investors".

The claim is misleading; in response to the posts, a spokesperson for Taiwan's National Immigration Agency told AFP on June 30, 2020 there was "no such information" in their guidelines; the Taiwanese Mainland Affairs Council website lists several other conditions for settlement status eligibility, including religious work and political asylum.

Also Read: Undated Photo Claims To Show Protests On May 24 In Hong Kong 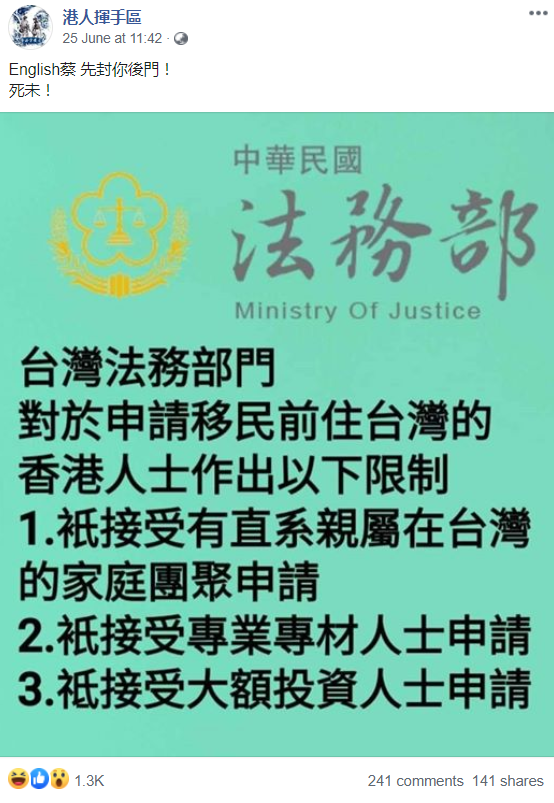 A screenshot taken on July 1, 2020, of the misleading post

The image in the post features the logo and name of Taiwan's Ministry of Justice in both Chinese and English at the top.

The Facebook post's caption translates to English as: "Tsai Ing-wen [President of Taiwan] has taken action to close the back door! / You are dead!"

China imposed a new national security law on Hong Kong on June 30, 2020. Since major pro-democracy protests began in the territory last June, some Hong Kong residents have sought new lives abroad, with many turning to nearby democratic Taiwan, according to this AFP report.

The claim, however, is misleading. The purported requirements for permanent residency listed in the posts are not a comprehensive list of immigration requirements stipulated by the Taiwanese authorities as of July 2020. There are multiple other pathways for Hong Kong citizens to become either residents or permanent residents of Taiwan, according to guidelines published by the Taiwanese government.

In response to the misleading posts, a spokesperson for Taiwan's National Immigration Agency told AFP in an email on June 30: "There's no such information".

A spokesperson for Taiwan's Ministry of Justice also said the posts were "false" in an email to AFP on June 29.

Applying for residency in Taiwan

As of July 2020, a Hong Kong or Macau permanent resident can apply for residency in Taiwan under 16 circumstances, according to Article 16 of these Taiwanese immigration regulations.

They can be seen in the screenshots below: 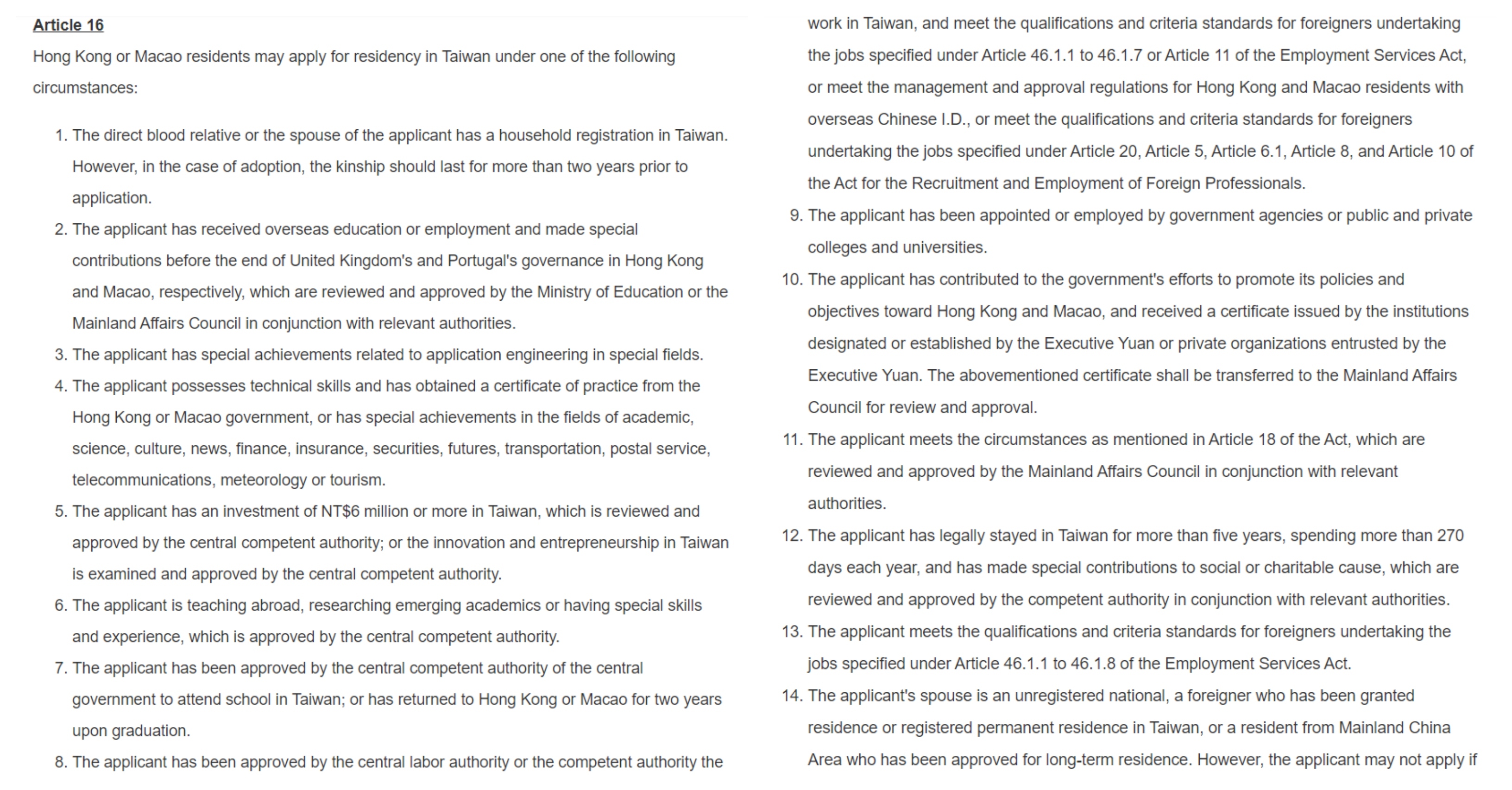 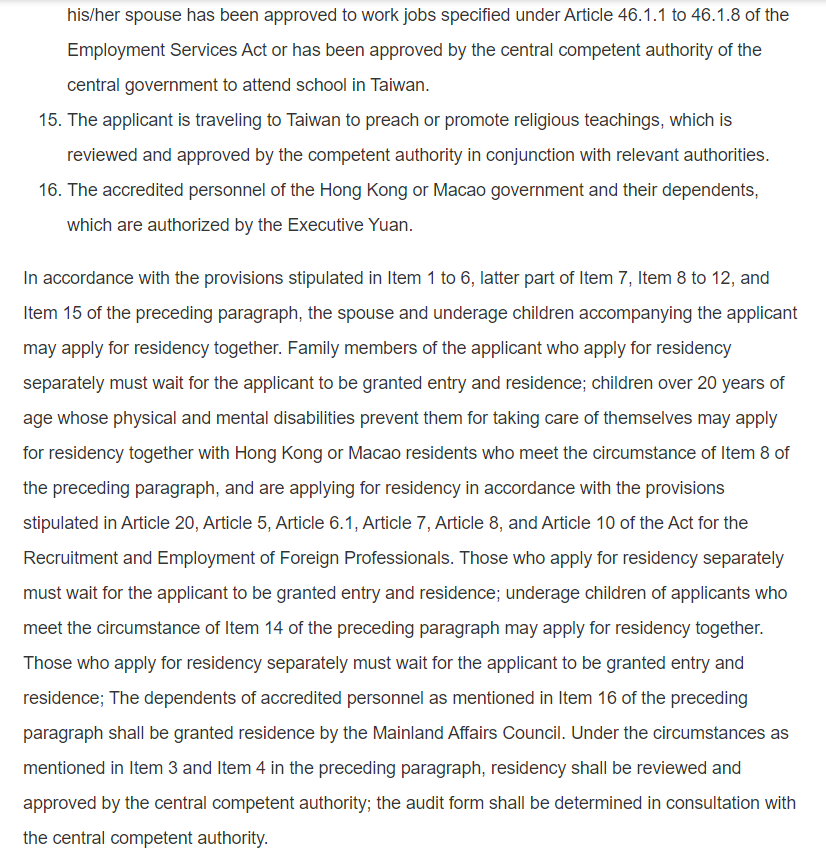 Information for permanent residents of Hong Kong and Macau who wish to apply for residency in Taiwan has also been published here by the Taipei Economic and Cultural Office in Hong Kong. According to the website, the page was last updated on June 9, 2020.

The list includes other conditions for residency in Taiwan that are not listed in the misleading claim, including people seeking protection for political reasons and those who plan to carry out religious work across the island, as highlighted in red in the screenshot below.

Applying for permanent residency in Taiwan

Claim :   Taiwan has imposed immigration restrictions on Hong Kong citizens.
Claimed By :  Posts on Facebook and Twitter
Fact Check :  False
Hong Kong Hong Kong Protests Hong Kong Pro-Democracy Protests China Taiwan
If you value our work, we have an ask: Our journalists work with TruthSeekers like you to publish fact-checks, explainers, ground reports and media literacy content. Much of this work involves using investigative methods and forensic tools. Our work is resource-intensive, and we rely on our readers to fund our work. Support us so we can continue our work of decluttering the information landscape. BECOME A MEMBER
📧 Subscribe to our newsletter here. 📣You can also follow us on Twitter, Facebook, Instagram, Youtube, Linkedin and Google News