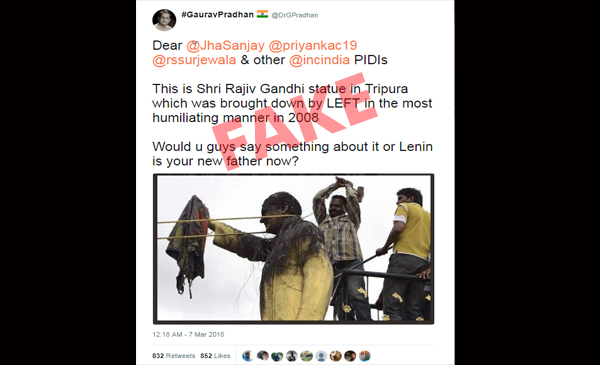 A 2013 photograph showing two men vandalise a statue of former Prime Minister Rajiv Gandhi in Andhra Pradesh is being shared on social media as vandalism by the Left in Tripura in 2008.

Barely days after the Bharatiya Janata Party (BJP) ended the CPI-M's 25 year rule in Tripura, videos and photos of a mob toppling a statue of Vladimir Ilyich Ulyanov, better known as Lenin, went viral on social media. Twittersphere has been divided whether it was right or not.

Several right-wing Twitter handles shared the image on Wednesday taking a dig at the Congress party and Indian liberals who have expressed their outrage. Below is a tweet by Gaurav Pradhan, who has been caught by BOOM and other factcheckers, in the past for his dubious tweets. (See here and here). The tweets also included Prafulla Ketkar, Editor of Organiser, the official mouthpiece of the RSS.

Would u guys say something about it or Lenin is your new father now? pic.twitter.com/IcAIYIgNZd

In 2008, the Commies brought down former PM Rajiv Gandhi's statue in Tripura with the inspiration of #Lenin, neither their intellectual voices nor @INCIndia had a problem with his. pic.twitter.com/P6nb7A3YkU

BOOM did a Google Reverse Image Search, and found that the picture dates back to August, 2013. 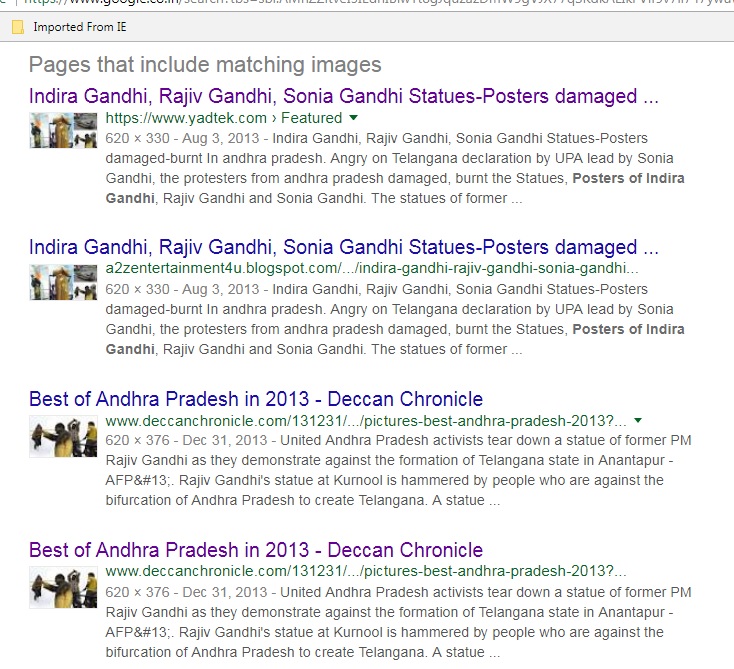 We also found an e-paper link of Deccan Chronicle from August 1, 2013 which reported that bronze statues of Rajiv Gandhi and Indira Gandhi were vandalised, toppled and torched in Anantapur. The state of Andhra Pradesh was gripped by large scale rioting and violence after the ruling-Congress party accepted the demand to carve out a separate state of Telangana. The Congress Working Committee announced its decision on Telangana on July 30, 2013 sparking violent protests by United Andhra Pradesh activists that targeted symbols of the Congress party.

The photograph also features among Deccan Chronicles' wrap up of its most iconic photos of 2013. (Click here)

Andhra Pradesh BJP Congress CPI-M fake news featured Indian Congress Party Left Rajiv Gandhi Statues Telangana Tripura Twitter
If you value our work, we have an ask: Our journalists work with TruthSeekers like you to publish fact-checks, explainers, ground reports and media literacy content. Much of this work involves using investigative methods and forensic tools. Our work is resource-intensive, and we rely on our readers to fund our work. Support us so we can continue our work of decluttering the information landscape. BECOME A MEMBER
📧 Subscribe to our newsletter here. 📣You can also follow us on Twitter, Facebook, Instagram, Youtube, Linkedin and Google News 📝Stay updated with all our latest fact check stories.