A video of people playing cards in a hall has been watched thousands of times in multiple posts on Facebook and Twitter alongside a claim that it shows a gambling arena, or casino, in Saudi Arabia. The video has been shared in a misleading context; it actually shows a card game tournament in Riyadh, Saudi Arabia, which awarded cash prize to its winners; gambling is prohibited in Saudi Arabia, and in Islam.

The post's Indonesian-language caption translates to English as: "#BALOOT gambling arena in Saudi Arabia. Opened and inaugurated for the first time". 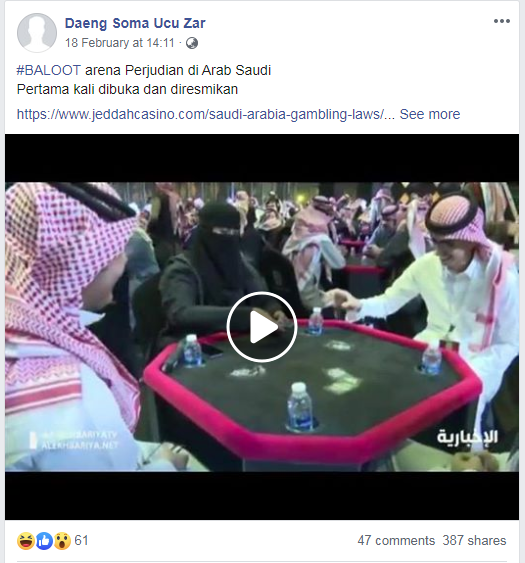 A logo for Saudi Arabian television channel Al Ekhbariya TV can be seen on the bottom right-hand corner of the video.

"Baloot" is similar to the French Belote. It is a popular card game among the Arabian Gulf youth, particularly the Saudis.

The same video also appeared with a similar claim on Twitter here, where it has been viewed more than 1,500 times.

The video has been shared in a misleading context; the footage actually shows a card game tournament in Riyadh, Saudi Arabia, which awarded cash prize to its winners; gambling is prohibited in Saudi Arabia, and in Islam.

An Arabic-speaking AFP journalist translated the video's title as: "Women present in the Baloot game championship".

The narrator in the clip can be heard explaining that Baloot is a popular card game in the Gulf region and that this marked the first time women had participated in such a championship.

The journalist can also be heard interviewing a female participant, who appears at the 30-second mark in the footage. She says that her husband taught her how to play Baloot and allowed her to participate in the championship. She also says that it was the first time women could participate.

Below is a screenshot comparison of the video in the misleading post (L) and the Al Ekhbariya TV video (R):

The Baloot Championship began from February 13 to February 20, 2020 and held at Riyadh Front shopping mall, according to the General Entertainment Authority of Saudi Arabia here.

Saudi Gazette, a Saudi-based English daily, published this report about the championship on February 17, 2020, headlined: "Passion grips Baloot championship as women face off men for the first time".

The first two paragraphs of the report read: "Eagerness, passion and joy gripped the Riyadh Winter Baloot Championship as women faced off men for the first time in one of the most popular games in the Kingdom.

"The championship is being held at the Riyadh Front from Feb. 13 – 22, 2020, with gamers competing for prizes worth a total of over SR2 million."

Below is the screenshot of the Saudi Gazette report: 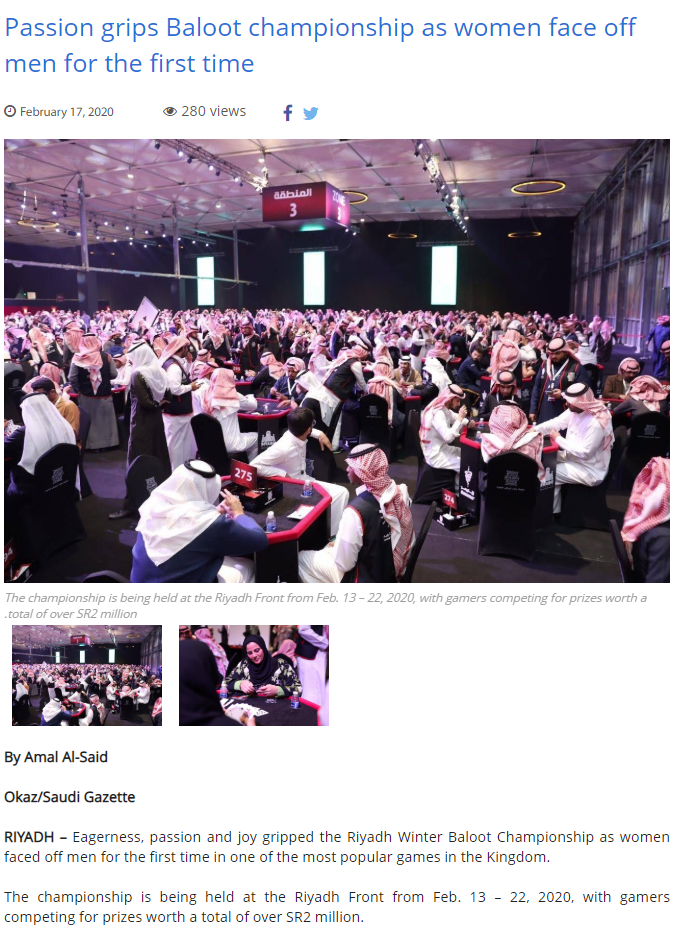 Screenshot of the Saudi Gazette report

Arab News, another English-language Saudi daily, also published this report on the event on February 17, 2020, headlined: "Female Baloot players show off their skills at Saudi championship".

The total prize money of the tournament was two million Saudi riyal prize money to winners, according to the official website here.

Gambling is prohibited in Saudi Arabia. Its constitution is based on the Koran. The gambling prohibition in the Koran can be read here and here.

Claim Review :   A gambling arena or casino has been opened and inaugrated in Saudi Arabia for the first time.
Claimed By :  Social Media Users
Fact Check :  Misleading
Saudi Arabia casino Saudi Arabia gambling online gambling saudi arabia viral video video saudi arabia gambling sharia law islamic law koran FAKE NEWS Jeddah Gulf West Asia Baloot Card games Al Ekhbariya TV
If you value our work, we have an ask: Our journalists work with TruthSeekers like you to publish fact-checks, explainers, ground reports and media literacy content. Much of this work involves using investigative methods and forensic tools. Our work is resource-intensive, and we rely on our readers to fund our work. Support us so we can continue our work of decluttering the information landscape. BECOME A MEMBER
📧 Subscribe to our newsletter here. 📣You can also follow us on Twitter, Facebook, Instagram, Youtube, Linkedin and Google News