Facebook users are sharing a photo of empty supermarket shelves and claiming that they are the result of shortages caused by ongoing train blockades by anti-pipeline protesters in Canada. This is misleading; the photo shows a supermarket in the US city of Atlanta in 2014, and local officials said the main concern in the Maritimes is a propane shortage.

A meme making rounds in Canada shows a photo of a masked protester next to a photo empty supermarket shelves. Above the photos, a caption states: "Illegal blockades causing shelf shortages in the Maritimes," in reference to Canada's Atlantic provinces of New Brunswick, Nova Scotia, and Prince-Edward-Island. 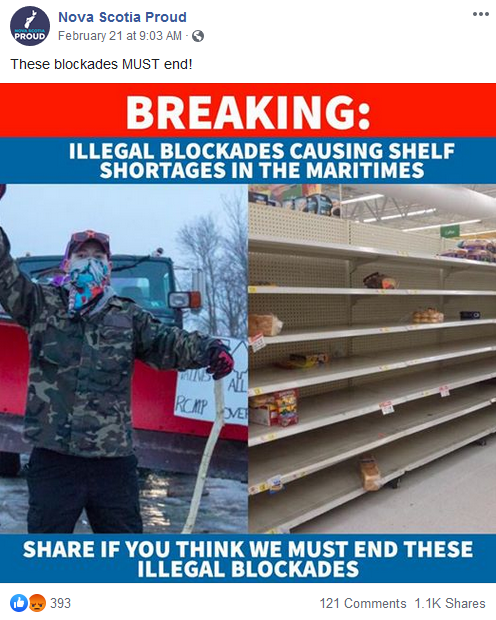 The post was published on February 21 by Nova Scotia Proud, a conservative-leaning Facebook page, and subsequently shared by New Brunswick Proud and Proud To Be A Canadian, two affiliated pages.

However, the post is misleading because the photo of the store was not taken in Canada, but in a supermarket in Atlanta, in the US state of Georgia, in February 2014. Shoppers in the southeastern state were preparing for a snow storm dubbed "Snowmageddon 2014," leaving shelves in this supermarket empty. 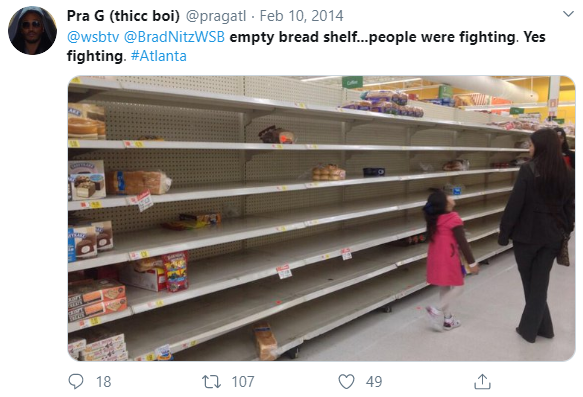 Canada's Maritime provinces have suffered propane shortages due to blockades that have disrupted Canada's rail traffic for more than two weeks. Protesters are acting in support of the Wet'suwet'en hereditary chiefs, members of a Canadian first nation fighting construction of a natural gas pipeline on their traditional territory in northern British Columbia, Canada's westernmost province.

But Patrick Sullivan, president of the Halifax Chamber of Commerce, in Nova Scotia's capital, told AFP, the impact on grocery stores is low because "most grocery chains have just switched to trucks."

"Certainly there have been shortages, but not as dramatic as this photo shows. I didn't see any shelves like that when I was in the grocery store this weekend picking up my groceries," Sullivan said.

Mike Hammoud, president of the Atlantic Convenience Store Association, also told AFP that "there are some empty spaces on shelves but they're not all completely empty like that picture."

Federal government officials told reporters that the blockades were having a negative impact on Canada's economy, with freight traffic suspended and 1,000 rail workers temporarily laid off. "It could even affect our GDP if it continues," transportation minister Marc Garneau said Sunday.

One of the main blockades, in Tyendinaga, a township east of Toronto, was dismantled on Monday by the Ontario Provincial Police.