Mike Bloomberg's campaign tweeted and then deleted a series of fake Bernie Sanders quotes on dictators that parodied remarks by the Vermont senator, a rival for the Democratic presidential nomination.

The tweets -- which have been archived here -- were described by the campaign as "guesses" about what Sanders thinks about various despots, taking aim at his actual comments on late Cuban leader Fidel Castro. 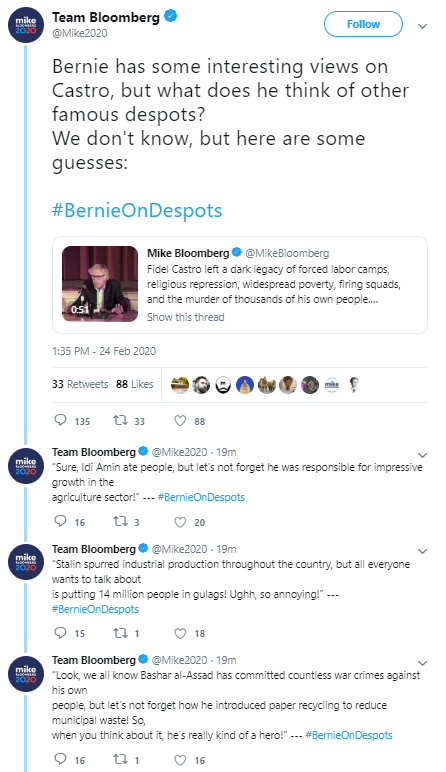 "'Sure, Idi Amin ate people, but let's not forget he was responsible for impressive growth in the agriculture sector' --- #BernieOnDespots," read one tweet.

ALSO READ: No, Bernie Sanders Does Not Want To Tax Minimum Wage Workers At 52%

"'Look, we all know Bashar al-Assad has committed countless war crimes against his own people, but let's not forget how he introduced paper recycling to reduce municipal waste! So, when you think about it, he's really kind of a hero!' --- #BernieOnDespots," said another.

The tweets parodied Sanders's remarks on Castro, which have drawn fire from both Bloomberg and Pete Buttigieg, another Democratic presidential hopeful.

In an interview with CBS's "60 Minutes" released on February 24, 2020, Sanders defended positive comments he made in the 1980s on education and health care under Castro.

"We're very opposed to the authoritarian nature of Cuba, but, you know, it's unfair to simply say everything is bad," Sanders said. "When Fidel Castro came into office, you know what he did? He had a massive literacy program. Is that a bad thing, even though Fidel Castro did it?"

Bloomberg tweeted a video clip from the "60 Minutes" interview, saying: "Fidel Castro left a dark legacy of forced labor camps, religious repression, widespread poverty, firing squads, and the murder of thousands of his own people. But sure, Bernie, let's talk about his literacy program."

The series of fake quotes is not the first misleading material to come out of Bloomberg's campaign.

ALSO READ: Fake Speech From 1835 Calling To 'Break The Backbone Of Africa' Viral

Following his Democratic debate debut in Nevada, the candidate tweeted a video that had been edited to make it appear that a comment he made had left his rivals speechless for a lengthy period, when in fact he quickly resumed speaking.

And one of Bloomberg's campaign ads attacking President Donald Trump used footage that dated to his predecessor Barack Obama's time in office.