A speech calling on Britain to "break the very backbone" of Africa has circulated online for years. The words are attributed to politician Lord Macaulay in an address to Britain's parliament in 1835. However, there are no records of the speech and Macaulay was in India the day it was allegedly given.

"If the Africans think that all that is foreign and English is good... they will become what we want them, a truly dominated nation," reads the extract of a speech purportedly given by Lord Macaulay to Britain's parliament on February 2, 1835.

It calls on Britain to "break the very backbone of this nation" and "replace her old and ancient education system, her culture". 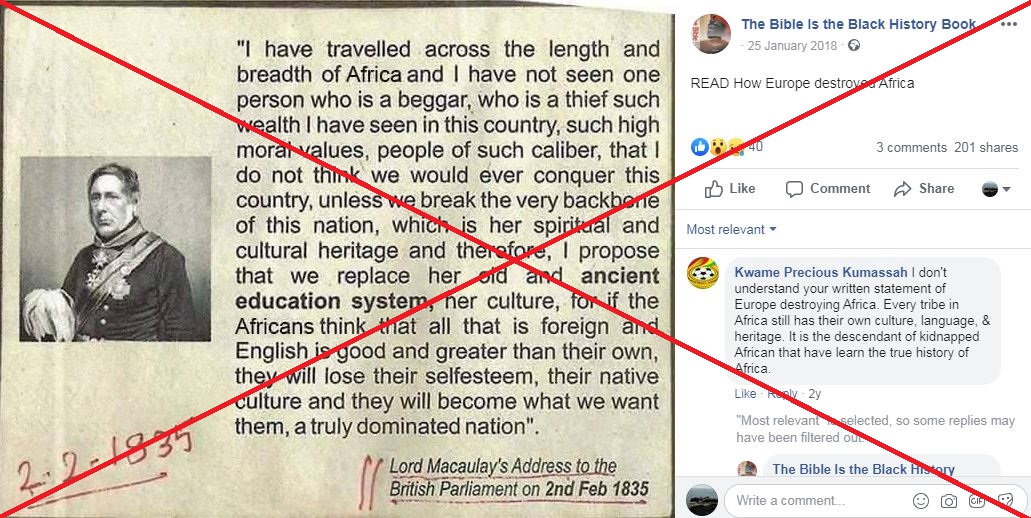 A screenshot of the false claim shared on Facebook, taken on February 27, 2020

A screenshot of the speech has been widely shared since at least 2015 on social media in Africa, including in Nigeria, Kenya and Uganda.

A similar version of the speech with the word "Africa" replaced with "India" has also circulated online in India. 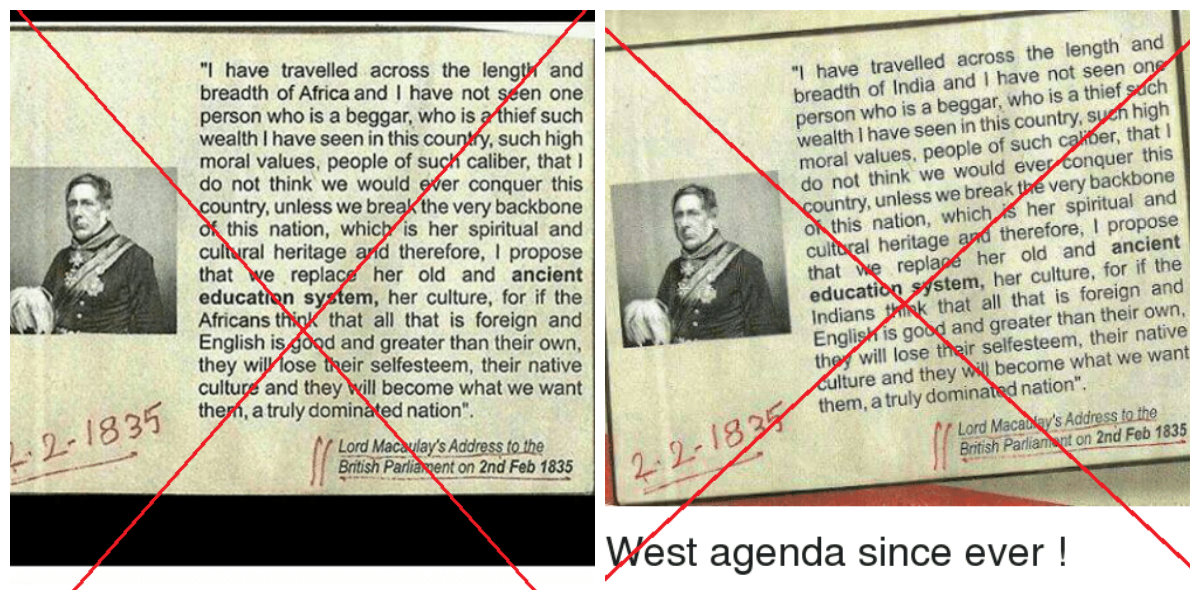 The speech has been widely cited, including by the Indian government in a report on employment and education published in 2002.

Britain ruled much of Africa and the Indian subcontinent from the 18th until the late 20th century. Macaulay played a key role in establishing a Western education system and criminal code in India in the 1830s.

However, the speech he apparently gave to Britain's parliament on creating "a truly dominated nation" does not exist in the Hansard archives, which document parliamentary records from the early 19th century to the present.

There are 789 results for the word "Macaulay" from 1800 to 1859 -- the period he was alive -- in parliamentary archives, but none of them features the speech.

A search on Hansard UK parliamentary records tool on February 28, 2020
ALSO READ: Sharia Has Become A Part Of UK Law? No, The Claim Is Misleading

It is also nowhere to be found in Columbia University's records of Macaulay's life and work.

Social media posts claim that Macaulay gave the speech to parliament on February 2, 1835. However, not only was parliament closed on this date, but Macaulay was in India.

Contacted by AFP, a spokesman for Britain's House of Lords said that parliament was prorogued between August 15, 1834, and February 19, 1835. The speech "could not have been said during this period", he said.

Between 1834 and 1838, Macaulay held various posts in India under British rule, serving on the Supreme Council of India and presiding a commission on Indian jurisprudence.

"He could not have made (the speech, editor's note) as he was firmly in Calcutta at the time," said Dr Zareer Masani, historian and author of "Macaulay: Britain's Liberal Imperialist".

ALSO READ: No, Zambia's Army Has Not Imposed A Curfew

Several historians told AFP they did not think the man in the photograph accompanying the quote was Lord Macaulay. "It's definitely not Macaulay although it's been wrongly attributed to him," Masani said.

One historian, who didn't want to be quoted, pointed out that the man presented in social media posts as Macaulay (below left) resembled a portrait of British army officer Sir Henry John William Bentick (below right) on the National Portrait Gallery's website. 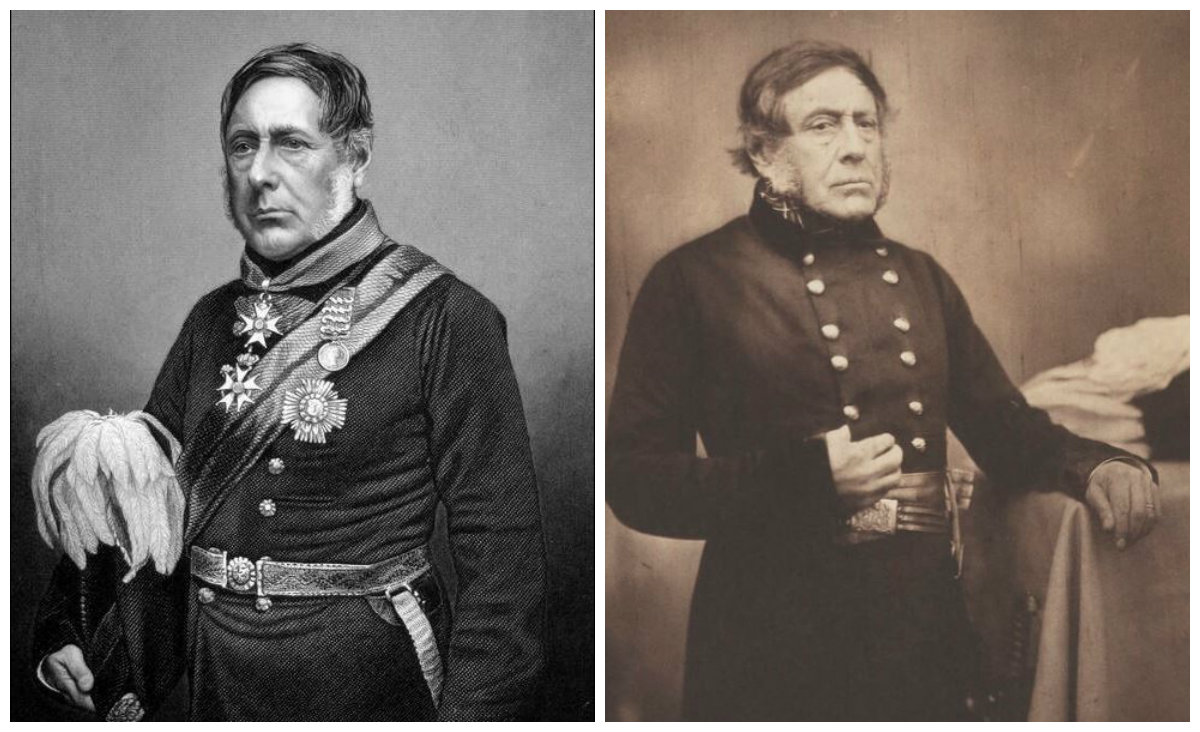 Macaulay's "Minute on Education" in 1835, which promoted the superiority of Western education, was supported by Lord William Bentick. In the document, Macaulay talks of creating "a class of persons Indian in blood and colour, but English in tastes, in opinions, in morals and in intellect".

Claim :   Politician Lord Macaulary addressed the Britain Parliament in 1835, calling on Britain to break the very backbone of Africa.
Claimed By :  Social Media users
Fact Check :  False
Britain parliament 1835 address speech colonisation The Queen slavery imperialism British rule Fake News Colonial rule Facebook Viral
If you value our work, we have an ask: Our journalists work with TruthSeekers like you to publish fact-checks, explainers, ground reports and media literacy content. Much of this work involves using investigative methods and forensic tools. Our work is resource-intensive, and we rely on our readers to fund our work. Support us so we can continue our work of decluttering the information landscape. BECOME A MEMBER
📧 Subscribe to our newsletter here. 📣You can also follow us on Twitter, Facebook, Instagram, Youtube, Linkedin and Google News