If WhatsApp forwards are to be believed, coconut oil cures dengue, wheat and barley gets rid of diabetes, and combiflam tablets can lead to the death of a person! The fake forwards viral on WhatsApp, many a times quote fictional doctors or medical professionals clueless that their names are being used to spread misinformation.

BOOM looked at five such forwards regularly circulated on WhatsApp.

Come monsoon, and a message claiming "papaya leaf extract tablets cure dengue" start doing the rounds on WhatsApp groups. The message claims that these "pills will cure dengue in 48 hours" and are available for free byt the company. The messages details that Pepaero and Caripill as tablets as 'Dengue free tablets' prepared from the leaf extract of Papaya.

BOOM contacted the manufacturers of both Pepaero and Caripill who stated they have never claimed to cure dengue in two days. The companiessaid that their products assist in increasing blood platelets steadily. Read our fact check here.

BOOM contacted Sukumar who denied ever making such a statement or advising coconut oil as a cure for dengue. he claim of coconut oil preventing from dengue also could not be scientifically proved. Read the story here.

This message circulates around monsoon and Dr. Sukumar is inundated with calls every year. 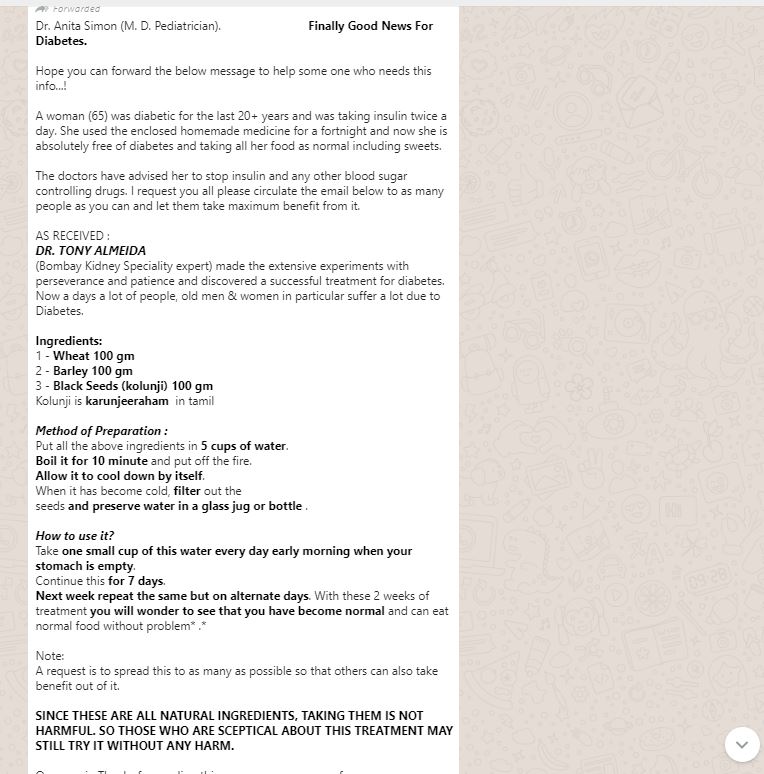 The most common fake news surrounding diabetes has been a message by a certain Dr. Tony Almeida and Dr. Anita Simons. The message states that diabetics should consume a mixture of wheat, barley, and kalonji (black nigella) seeds. This will get them off insulin.

The message cites an anecdote wherein a patient with severe diabetes was taken off insulin injections and medicines after consuming this concoction.

BOOM contacted Dr. Almeida who said that his name has been falsely implicated. BOOM also spoke to doctors from allopathy and naturopathy backgrounds to find that none of them scientifically support this theory. Read the story here.

This message has been in circulation for the past few years.

In 2015, Sanofi India had pulled out a few batches of its combiflam- an anti-inflammatory drug because of them being of substandard quality. Since then, the message that combiflam can be a cause for death has been circulating.

BOOM found that few of the medicines would take longer to breakdown in the body.

A Nigerian terrorist's image was circulated as him infecting Cadbury with HIV. The image suggests that the accused is an employee of Cadbury who was infected with HIV and had mixed his blood in the raw materials used for producing Cadbury products.

BOOM contacted Mondelez who stated that this was a measure to spoil the name of the product and was fake news.

What Do Doctors Have To Say?

"We tend to be neutral and tell our patients what we know and do not advise for or against some alternative natural therapies," Dr. Gadgil stated.

"WhatsApp messages are making people more aware but they are also leading to people believing in messages which could be fake", Dr. Patil concluded.

Both believe it will not have a far-fetching effect on the health and medical sector because people still consider doctors as their primary healthcare and treatment providers.