A picture showing actors Swara Bhasker and Mohammed Zeeshan Ayub holding a poster with an anti-Mamata Banerjee slogan written over it is morphed.

BOOM found that the original picture was clicked in December 2019 at the Delhi Press Club. The duo had flashed the poster during a press conference on 'State oppression on citizens and police brutality - Ground report from Uttar Pradesh' on December 26 last year.

The march was organised as a mark of protest against the alleged worsening law and order situation in the wake of recent killings of BJP workers in the state. However, things took a violent turn during the protests. Read more about it here.

Also Read: No, Priyanka Gandhi Vadra Is Not Hugging 'Naxal Bhabhi' In This Photo

The Facebook post shows Swara Bhasker and Mohammed Zeeshan Ayyub standing with a poster with a Bangla caption written over it which translates to 'People are aware that Mamata is scared'.

A hashtag with the post reads "#NabannoChalo" or 'march to Nabanna'.

BOOM found another post where the image has been morphed and the text on the poster has been changed to 'We Love' followed by the picture of Pakistan's national flag.

The comments section of the tweet is filled with several edited versions of the same picture.

BOOM has on previous occasions debunked fake claims made by Bagree on Twitter.

BOOM did a reverse image search and found the original photo of Bhasker and Zeeshan Ayyub from December 2019.

The image can be seen in the photo gallery of Bollywood Pub with a caption which reads 'Actors Swara Bhaskar and Mohammed Zeeshan Ayyub flash a placard during a press conference on "State oppression on citizens and police brutality – Ground report from Uttar Pradesh", in New Delhi on Dec 26, 2019. (Photo: IANS)'.

The press conference was held in the backdrop of the anti-CAA protests that were being held in several parts of the country around the same time. The original picture has a Hindi caption written over the poster which translates to 'We, Bindiya Banarasi and Murari Banarasi, are looking for Zoya-Kundan who are lost in Uttar Pradesh, not romantically but fearing UP police's atrocity'.

It's noteworthy that Bindiya and Murari were the characters portrayed by Bhasker and Zeeshan Ayyub respectively in the 2013-bollywood film Raanjhanaa.

The same image from a different angle was shared on Twitter and Instagram by Swara Bhasker on the same day.

A news report published in Deccan Herald on December 26, 2019 carried the same image.

The report by the 'Ham Bharat ke Log: National Action Against CAA' mentioned that the 'Uttar Pradesh government is trying to crush the protests against Citizenship Amendment Act (CAA)'.

A comparison of the viral image (left) and original image (right) can be seen below. 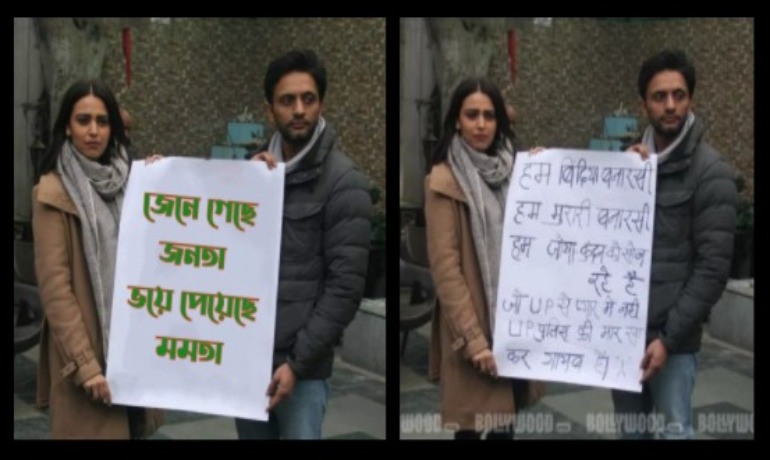