A nearly two-and-a-half year old photo showing the wreckage of an Indian Air Force helicopter that crashed in Uttarakhand is being peddled by Pakistani Twitter users as a recent incident in Ladakh.

The viral image is being shared with the caption, "Today, Indian MI 17 Helicopter has crashed in Ladakh."

BOOM had previously debunked misinformation peddled by the same account in the past. (here, here). The account claims to be from Nepal, nearly all of its tweets are pro-Pakistan and pro-China.

Pakistani TV anchor Mubasher Lucman also shared the viral photo asking if an MI 17 helicopter has crashed in Ladakh. Lucman, did not clarify even after several Twitter users pointed out that the photo is old.

Indians please check is this your M 17 crashed in Laddakh? We will keep you posted of any developments pic.twitter.com/Oc8LJVlGYp

On searching with the same caption, we found that the viral image is being shared by Pakistani Twitter accounts with the false claim

A reverse image search of the photo showed news reports that included the same image and identified the wreckage as an Indian Air Force transport helicopter which crashed near Kedarnath temple in Uttarakhand in April 2018.

The helicopter had crashed-landed after it hit an iron girder while trying to land at a helipad and all passengers were safe and only faced minor injuries reported NDTV on April 3, 2018.

The same helicopter and man in a red sweater can be seen in the video below.

Four people including the IAF pilot suffered injuries among eight people -- six passengers, the co-pilot and the pilot, the helicopter was carrying reported NDTV. The Indian Air Force had launched an investigation to find out what caused the helicopter to collide with the iron girder that led to the crash landing further stated the report.

The same viral photo can be spotted in this Times of India report on the incident from April 3, 2018. 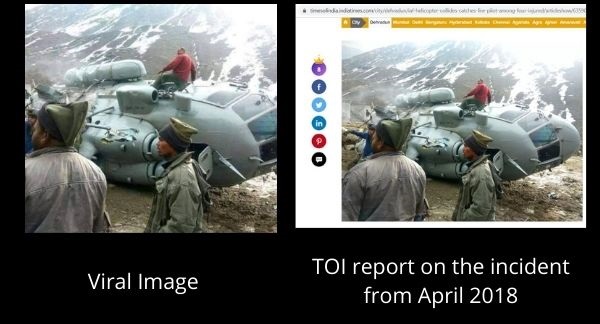 Claim :   Photo shows Indian MI 17 Helicopter has crashed in Ladakh
Claimed By :  Facebook Posts
Fact Check :  False
Fake News FactCheck IAF crash Indian Air Force India China Pakistan helicopter crash India vs China Ladakh
If you value our work, we have an ask: Our journalists work with TruthSeekers like you to publish fact-checks, explainers, ground reports and media literacy content. Much of this work involves using investigative methods and forensic tools. Our work is resource-intensive, and we rely on our readers to fund our work. Support us so we can continue our work of decluttering the information landscape. BECOME A MEMBER
📧 Subscribe to our newsletter here. 📣You can also follow us on Twitter, Facebook, Instagram, Youtube, Linkedin and Google News 📝Stay updated with all our latest fact check stories.