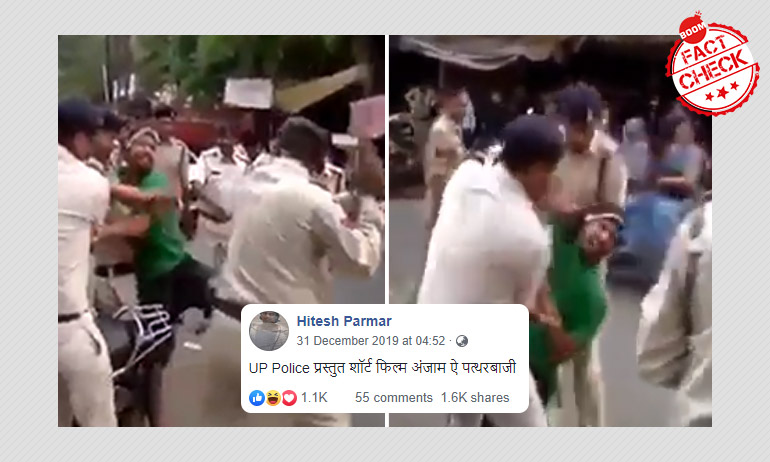 A disturbing video of Indore Police beating miscreants in public view has resurfaced with claims that it is from Uttar Pradesh where anti-Citizenship Amendment Act (CAA) protesters were taught a lesson for destroying public property.

The 2 minute 20 second long video shows police taking turns to thrash lawbreakers as they cry for help. The video has been captioned as, "UP police presents a short film Result of Stone-Pelting. People who destroy country's property should be treated like this."

BOOM found that the incident happened in 2015 in Indore, Madhya Pradesh, where cops thrashed miscreants publicly.

The video is viral after the announcement of CAA that triggered nationwide protests since December. Uttar Pradesh in particular witnessed major violence, as protesters went on a rampage and pelted stones at the police, ransacked a police outpost and set vehicles on fire. Police in turn resorted to lathi charge. Read more here.

The viral tweets can be seen below. Click here and here for the archive of the tweets.

The video has garnered more than 60,000 views on Facebook, where it is viral with the same narrative.

Also read: Is This A Video Of BJP MPs Requesting Rajnath Singh To Revoke CAA-NRC?

The Uttar Pradesh Police Fact Check handle replied to one of the viral tweets stating that the incident did not occur in the state. They tweeted: "The incident showed in the video is not related to the UP police, please do not spread misleading information."

The UP Police also shared the link of the original incident.

The video is a series of incidents that happened in Indore, Madhya Pradesh in May, 2015. According to the ABP News bulletin, Indore Police rounded up criminals and thrashed them publicly on various instances to set an example and ensure no crime was committed in the city.

The bulletin featured both the clips that are viral with the fake claim. Indore police had reportedly argued that they beat up criminals publicly to alleviate terror in the city.

The same was reported in Aajtak .