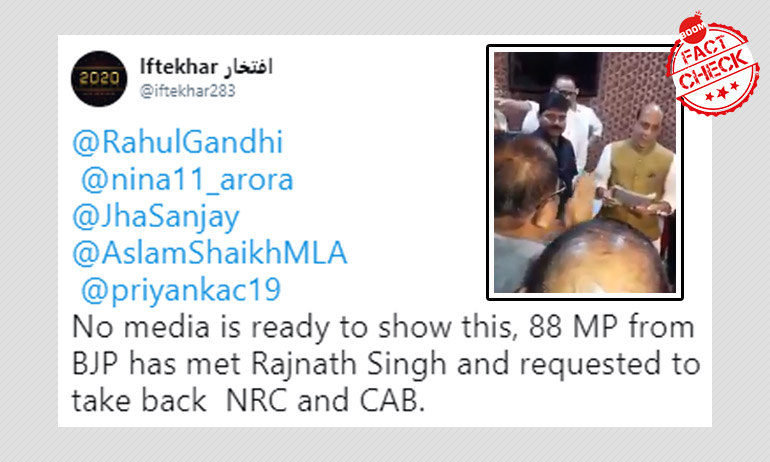 An old video from 2018 has been revived on social media where Defence Minister Rajnath Singh is seen surrounded by a group of people expressing their grievances. The captions shared falsely claim that the video shows BJP MPs requesting Singh to revoke the Citizenship Amendment Act and the National Register of Citizens.

BOOM received the 32 second footage on its helpline with the following caption: "Factcheck is it true that 88 MP from BJP have met Rajnath Singh and requested to take back NRC and CAB?"

Screenshot of the video.

Taking hints from the caption that came with the video, BOOM did a search on Twitter with the following keywords: "88 MP Rajnath Singh NRC". The search results revealed that the exact same video has been posted on Twitter with the following caption: "No media is ready to show this, 88 MP from BJP has met Rajnath Singh and requested to take back NRC and CAB."

We searched for the same caption on Facebook, and found that the exact video and caption have been shared together multiple times in the past 48 hours.

A reverse image search with keyframes from the video took us to the same video uploaded multiple times on YouTube and Facebook in 2018. According to the YouTube video, uploaded on September 1, 2018, the video shows BJP MLA Rajendra Singh giving his resignation to then-Home Minister Rajnath Singh, in protest against the SC/ST Act.

The Facebook video also mentions that the video shows people protesting against the SC/ST Act. This video was uploaded on August 11, 2018.

BOOM was not able to independently verify the claims made by the captions in the older videos uploaded on Facebook and YouTube. However, given that this video was shot long before the CAA or NRC came into public discourse, the video cannot be linked to the current wave of protests around the country against CAA and NRC.