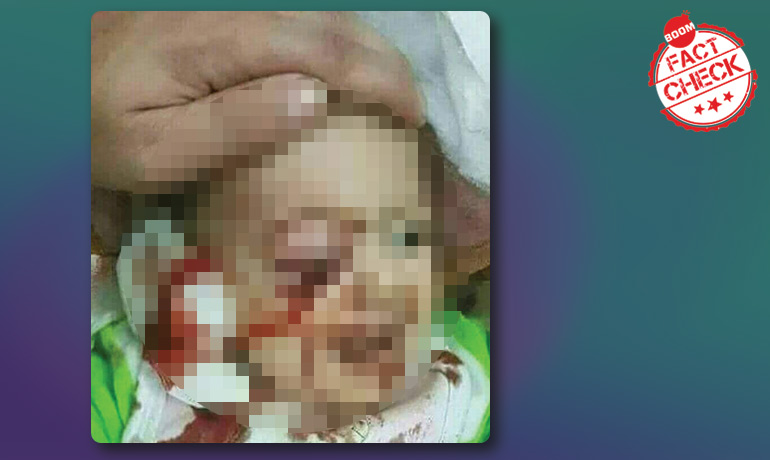 A distressing image showing a toddler with a gruesome eye injury is viral on social media with false claims that the injury was caused by anti Citizenship Amendment Act protesters, who were pelting stones at trains in West Bengal.

The image shows the child bleeding profusely from a swollen eye. BOOM found that the image is several years old and not related to the recent anti-CAA demonstrations that have erupted across the country.

The image has been captioned as follows: "Child's eye injured due to stone pelting on trains by Muslims in West Bengal. Who is responsible for this? They have not left your wives and sisters on grounds of religion and neither have they relieved toddlers from their torture. This is pure Islamic Jihad ... #CABPolitics.

An archived version of the tweet can be accessed here.

The image is viral on Facebook, where the incident has been falsely claimed to have happened in West Bengal, during the CAA protests. A Facebook post can be accessed here and its archive here.

The post can be seen here and its archive here.

Anti-CAA protest turned violent in West Bengal last week when protesters pelted stones at the Coromandel Express in Uluberia station. Videos showing protesters vandalising public property of railway stations of the Murshidabad district, have gone viral since. However, Sanjoy Ghosh, PRO of South Eastern Railway had told The Telegraph that no passengers were injured.

BOOM ran a reverse image search and found that the photograph is old and unrelated. The image has been present on the internet from as early as 2016.

We found a tweet as early back as November, 2016 by a Syrian Twitter user, who claimed that the photo was taken in Aleppo, a Syrian city, that has been war ravaged for the past few years. The tweet reads, "Aleppo...the danger is coming from Moscow... #Save Aleppo.. Stop shame in Syria.."

The tweet can be viewed here and its archive here.

The image was also shared in 2017 by a handle which blamed Russian soldiers of injuring the child. The tweet was captioned as, "Russian pilot offended child". (Original tweet in Russian: "Российские летчик ребенка обидел")

However, BOOM could not independently verify the origins of the photograph.