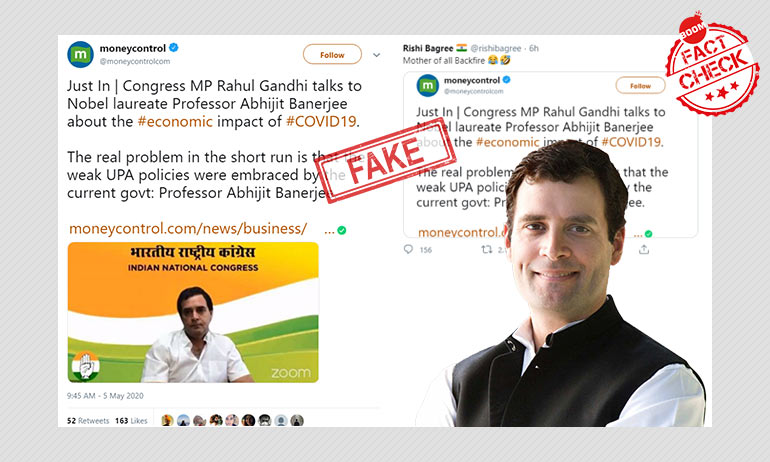 A tweet by financial news website moneycontrol.com misquoting Nobel laureate Abhijit Banerjee's remarks on UPA policies being adopted by the current government, in an interview with Rahul Gandhi, has gone viral despite the site admitting it 'misrepresented' Banerjee's views.

The misquote said that the real problems of the short-run are the weak policies of the UPA (United Progressive Alliance), adopted by the current government.

While moneycontrol was quick to issue a clarification, the incorrect tweet still went viral. This, is turn, was picked up by several other users of Twitter and made viral.

The tweet containing the misquote can be viewed below. It says, "The real problem in the short run is that the weak UPA policies were embraced by our current government.

It is not clear why moneycontrol has not deleted the incorrect tweet.

The real problem in the short run is that the weak UPA policies were embraced by the current govt: Professor Abhijit Banerjee. https://t.co/uzYkuKnFHs pic.twitter.com/XOBeNkOL0a

#NewsAlert - The real problem in the short run is that the weak UPA policies were embraced by the current govt: Nobel Laureate Abhijit Banerjee. pic.twitter.com/6lTBWdqoNq

Twitter user Rishi Bagree, who started the trend, quote-tweeted Moneycontrol and wrote, "Mother of all backfire".

An archived version of his tweet can be found here.

"The real problem in the short run is that the weak UPA policies were embraced by the current govt: Professor Abhijit Banerjee. " https://t.co/OlCQeg8Fbr

Nobel laureate, Abhijit Banerjee, left @RahulGandhi red-faced when he stressed that "weak policies of UPA era were embraced by @BJP4India ." This reminisce left RaGa bamboozled and befuddled as he looked for space. But Banerjee did stood out efficiently and economically.

The interview of Banerjee - who won the Nobel Prize in economics for his work in poverty alleviation in 2019 - with Gandhi is part of a series of interviews being undertaken by the Congress leader, where he is conversing with experts and technocrats over the ongoing lockdown and coronavirus pandemic.

His first interview was with former Reserve Bank of India Governor, Raghuram Rajan. Both these economists are also associated with NYAY, a basic income scheme promise unveiled by the Congress as one their marketing points going into the Lok Sabha elections last year.

Gandhi started the interview by asking Banerjee about the impact of the lockdown on the poor. He questioned him on how to think about UPA policies such as MNREGA (Mahatma Gandhi National Rural Employment Guarantee Act), Right to Food, etc - which have traditionally provided a floor for the poor - but will fall by the wayside due to the lockdown, and "millions and millions of people will fall back into poverty".

Banerjee replied, "These are kind of separable. I think that the real problem in the very short run is that these policies, good policies, put in place by the UPA are inadequate. And the government in a sense absolutely embraced them. It was not that there was partisan disagreement, it was clear that the UPA instruments will be used."

This can be heard below.

Moneycontrol too has issued a clarification in this regard, with the correct quote. They did this as a reply to their original misquoted tweet. However, this clarification does not seem to have gained the traction that the misquote did. The clarification had 60 retweets at the time of writing this article as opposed to 359 retweet the original tweet got and about 2000 retweet's from Rishi Bagree's account.

Here's the FULL quote: "The real problem in the short run is that these policies, good policies, put in place by UPA are inadequate & this govt in a sense absolutely embraced them.."

The error is deeply regretted. pic.twitter.com/YjBY8y3e7R