An old image, which shows a man in a police uniform holding stones in both hands, has been shared as a picture of a Delhi policeman in light of the recent unrest in north-east of the capital. BOOM has found the picture to be viral since atleast 2015, with the claims suggesting that the man in the picture is part of alleged police-supported violence that is taking place in the city. The unrest has killed around 20 people, including one head constable of the Delhi Police named Ratan Lal, and has injured more than 150 people, according to reports.

The image is had the caption:

On Facebook, the image was shared by the a Facebook page called 'Ravish Kumar Page', and it has more than 1,500 shares at the times of publication. 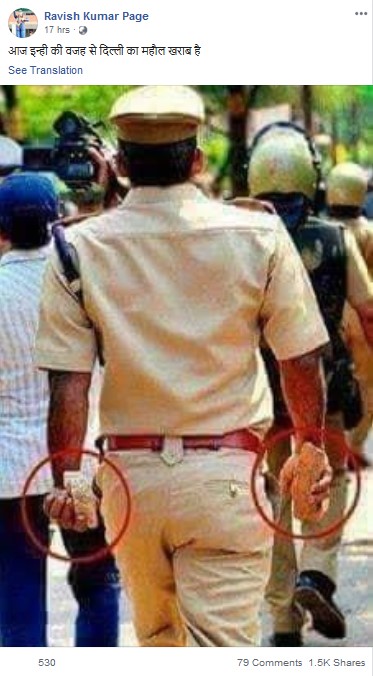 An archives version of the post can be found here. There are also other posts carrying the same caption which is viral on Facebook.

BOOM found this image along with the caption to also be viral on Twitter. The captions of the image shared on Twitter goes a step any further, and marks the image with the words, "Delhi Police: Throwing stones themselves, but are putting the blame on people protesting peacefully."

The unrest started on February 23, 2020, when factions against and supporting the Citizenship Amendment Act clashed in areas like Bhajanpura, Karwal Nagar and Chandbagh, which included the torching of shops, vandalism and the burning of vehicles. Armed mobs have been roaming in these areas, with the Delhi Police facing flak due to insufficient action after 2 days of rioting, with some even saying that they may be implicitly abetting the attacks.

BOOM used relevant keywords to find that this image of the policeman with stones in his hand has been on the internet from before the events of Delhi took place. BOOM could not ascertain the origins of the picture, but found instances of the photo going back to 2015.

The image was posted as part of posts that showed police acting against pro-Jalikattu agitators in Tamil Nadu in January 2017, with this photo of the policeman initially being posted on Twitter on January 23 and 24, 2017. Jallikattu is a traditional and annual bull-fighting festival taking place in Tamil Nadu. In January 2017, the state rallied against a Supreme Court ruling banning the practice, which was done as a result of petition filed by the Peoples' Ethical Treatment of Animals (PETA).

However, this is not the earliest instance of the photo being viral online. BOOM also found this picture to be online from a tweet in September 2015.

Claim Review :   Picture shows Delhi Police persons engaging in violence in north-eastern city
Claimed By :  Facebook page 'Ravish Kumar Page'
Fact Check :  False
Delhi Police Tamil Nadu FactCheck Jallikattu Delhi Delhi Riots Twitter Facebook
If you value our work, we have an ask: Our journalists work with TruthSeekers like you to publish fact-checks, explainers, ground reports and media literacy content. Much of this work involves using investigative methods and forensic tools. Our work is resource-intensive, and we rely on our readers to fund our work. Support us so we can continue our work of decluttering the information landscape. BECOME A MEMBER
📧 Subscribe to our newsletter here. 📣You can also follow us on Twitter, Facebook, Instagram, Youtube, Linkedin and Google News 📝Stay updated with all our latest fact check stories.