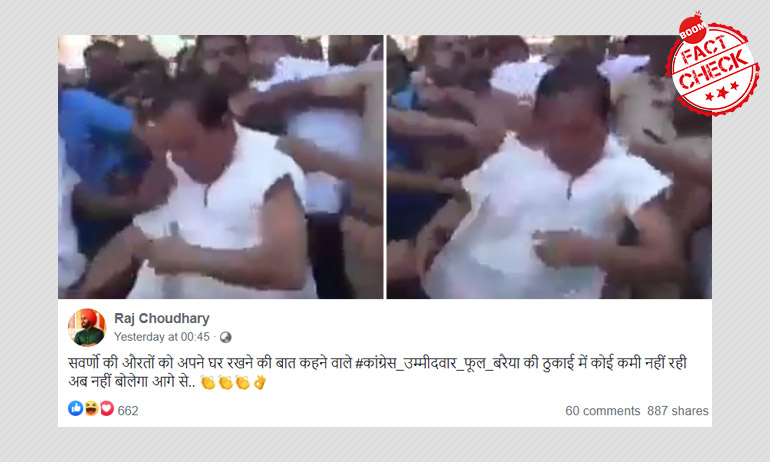 An old video of a Bharatiya Janata Party (BJP) leader from West Bengal being assaulted by a mob has resurfaced with claims that it shows Congress party leader Phool Singh Baraiya being attacked for his sexist and caste-based remarks recently.

The same video was recently viral with claims that Union Health Minister Dr Harsh Vardhan was assaulted. BOOM had debunked the claim surrounding the video and found that it is from 2016 where a BJP leader was allegedly beaten by alleged Trinamool Congress party workers in West Bengal. Read BOOM's debunk here.

A complaint was made to the Election Commission against Baraiya after two videos emerged of him making objectionable remarks against women and upper caste were viral. Baraiya, a popular Dalit leader, has denied the allegations. He will represent Congress and contest the by-poll for Bhander, Madhya Pradesh seat.

The video, which shows a mob beating up a man as police try to rescue him and take him away, is viral on Facebook with the same caption.

BOOM found that the incident is from October 2016, and the person in the viral clip is Bharatiya Janata Party (BJP) leader from West Bengal Subrata Mishra who was beaten up by reported TMC workers.

Union Minister Babul Supriyo, a BJP Member of Parliament (MP) from Asansol had gone to BNR More area in Asansol where he was hit after a senior local party leader Subrata Mishra was beaten as members of the two parties clashed, reported NDTV on October 20, 2016. The same visuals can be seen in this video report by ANI; Mishra can be seen being assaulted at the 14 seconds timestamp.

The same clip was previously viral in November 2016 after demonetisation, falsely claiming that BJP MP Dr Harsh Vardhan was beaten up by an angry mob outside a bank in Delhi. Vardhan had back then tweeted and clarified that on the viral video stating that it is being spread with malicious and mischievous intent.

A video in my name is making rounds on whatsapp and other media.
It's misleading content being spread with malicious and mischievous intent.