A video of a woman singing has been shared hundreds of times in Facebook posts that claim the footage shows a performance by Xi Mingze, daughter of Chinese President Xi Jinping, at her graduation ceremony from Harvard University in 2014. The claim is false; the video has circulated since 2008 in a post about a performance by a Japanese singer.

The video was published on Facebook here on August 30, 2020. It has been viewed more than 677 times. 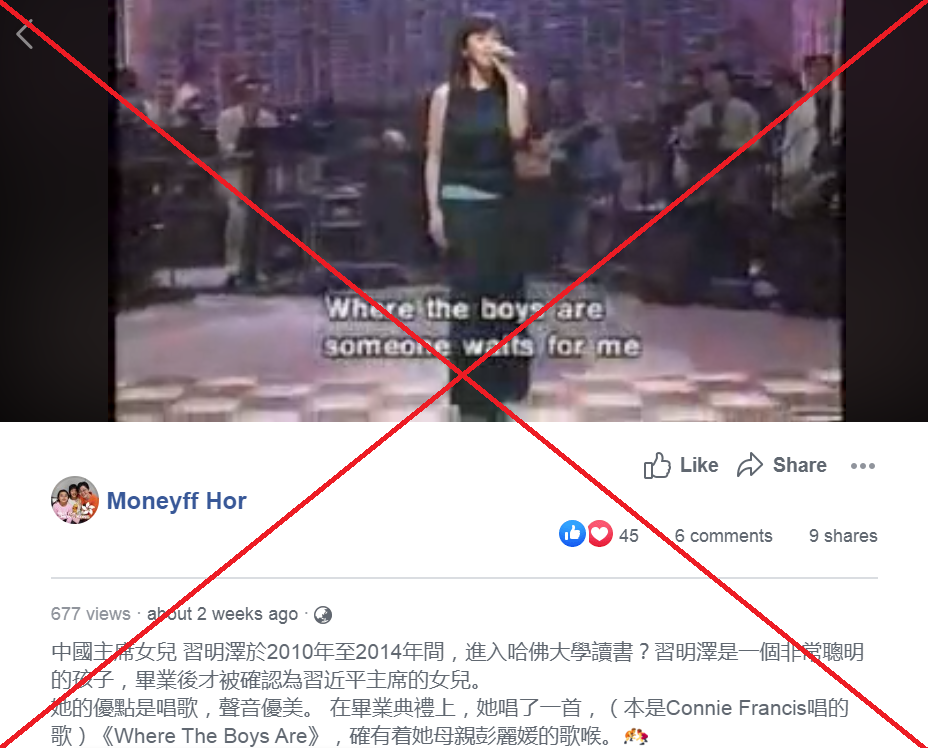 The post's traditional Chinese caption translates to English as: "Xi Mingze, the daughter of the Chinese president, entered Harvard University from 2010 to 2014? Xi Mingze is a very smart child who wasn't confirmed as President Xi Jinping's daughter until graduation.

"Her specialty is singing, and she has a nice voice. At the graduation ceremony, she sang a song (originally sung by Connie Francis) 'Where the Boys Are', which shows her singing voice is just like her mother Peng Liyuan."

Born in 1992, Xi Minze is the only daughter of President Xi and Peng Liyuan, a popular Chinese folk singer, as noted here by Chinese state radio station China National Radio.

A keyword search found the video actually shows a performance by Hikaru Nishida, a Japanese pop singer and actress.

The same footage was published on YouTube here in July 2008 in a post headlined in both English and Japanese: "where the boys are - Hikaru Nishida".

The performance seen in the video was also not featured in the 2014 Harvard University Commencement ceremony.

Xi Mingze did reportedly graduate from Harvard in 2014, but attended the university under a different name, according to The New Yorker.