A video has been viewed thousands of times on Facebook alongside a claim that it shows Russian healthcare workers celebrating a new vaccine for the novel coronavirus. The claim is false; the video shows medical staff celebrating the closures of isolation rooms at King Saud Medical City Al-Shumaisi Hospital in Riyadh, Saudi Arabia. 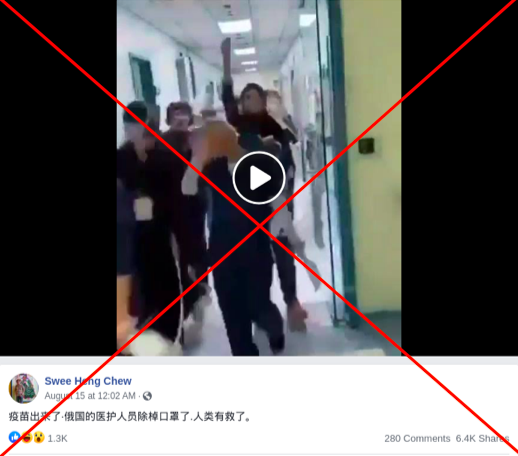 The caption, written in simplified Chinese characters, translates to English as: "The vaccine is out. Russian health care workers are removing their masks. Humans are saved!"

The video was also shared alongside a similar claim in Chinese here, and in Indonesian here, here and here.

A reverse image search on Google led to this video posted on Twitter on August 11, 2020.

It was posted by Dr. Khaled Al-Dahmashi, director of King Saud Medical City Al-Shumaisi Hospital, in Riyadh, the capital of Saudi Arabia.

Below is a screenshot comparison of the video in the misleading post (L) and the Twitter video (R): 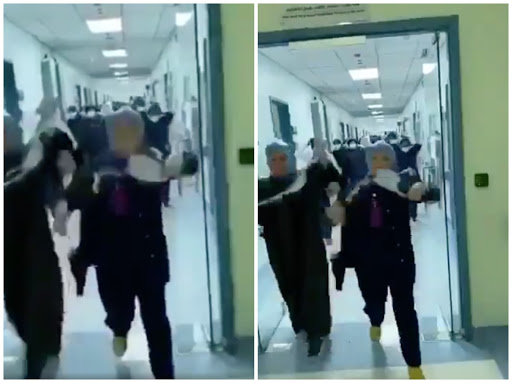 Translated to English, the Arabic-language tweet says: "The joy of the medical and nursing staff at King Saud Medical City #AlShumaisi by closing the isolation wards designated for #Covid19 in the General Hospital, after a significant decline in the number of injuries and an increase in the rate of recovery, praise be to God."

The next day, he retweeted the video with a clarification comment. Translated from Arabic, it says: "This is to clarify that this ward has 80 intensive care beds at the general hospital at KSMC. It was closed after the number of cases decreased, the intensive care was expanded from 130 beds to 460 for Covid-19. There are still cases of Covid-19 please follow the recommendations on the Health Ministry. Thanks to the medical staff, a special thanks to @tfrabiah."

Also Read: Did An Indian Health Minister Slap People For Not Wearing A Mask?

The first paragraph of the report says: "The director of the General Hospital of King Saud Medical City, Dr. Khaled Al-Dahmashi, published a video clip of the joy of the medical and nursing staff in closing the isolation wards designated for cases of infection with the emerging corona virus."

Claim :   Video shows Russian doctors celebrating the new COVID-19 vaccine.
Claimed By :  Facebook posts
Fact Check :  False
Sputnik V Sputnik V Vaccine Russian Vaccine Russian Vaccine for COVID-19 COVID-19 Vaccine Coronavirus Vaccine COVID-19 Cure Coronavirus Cure COVID-19 Pandemic Coronavirus Pandemic COVID-19 Coronavirus
If you value our work, we have an ask: Our journalists work with TruthSeekers like you to publish fact-checks, explainers, ground reports and media literacy content. Much of this work involves using investigative methods and forensic tools. Our work is resource-intensive, and we rely on our readers to fund our work. Support us so we can continue our work of decluttering the information landscape. BECOME A MEMBER
📧 Subscribe to our newsletter here. 📣You can also follow us on Twitter, Facebook, Instagram, Youtube, Linkedin and Google News