A video of people rushing down a hill has been viewed hundreds of thousands of times in multiple posts on Twitter, Facebook and YouTube alongside a claim it shows "hundreds of Indians running to block China's illegal construction in the border with India". The posts were shared after a deadly clash between Indian and Chinese soldiers at the border of the two countries in mid-June 2020. The claim is misleading; the video has circulated online since at least March 2020, months before the June border skirmish; it also corresponds with news videos of jade miners in Myanmar. A screenshot captured on June 22, 2020, of the misleading tweet

The footage shows a large group of people running down a hill. An orange excavator can also be seen at the bottom of the hill.

The caption of the Twitter post reads: "No. This is not a new Brad Pitt zombie movie. These are hundreds of Indians running to block #China's illegal constructions in the boarder with #India.

The same video, alongside a similar caption, has been shared here and here on Facebook; and here on YouTube.

The posts were published after a deadly clash between India and China at the border between the two countries on June 15, 2020. At least 20 Indian soldiers were killed in the incident. Indian media claim that 43 Chinese troops were also killed or seriously hurt -- Beijing is yet to give casualty numbers -- making it the deadliest encounter since 1967 and the first deaths in fighting since 1975. Here is an AFP report on the confrontation.

A reverse image search on Google combined with a keyword search found this earlier version of the video published on video-sharing app TikTok on March 25, 2020.

The TikTok video is a mirrored version of the video in the misleading posts.

Below is a screenshot comparison of the video in the misleading posts (L) and the March 2020 TikTok video (R): 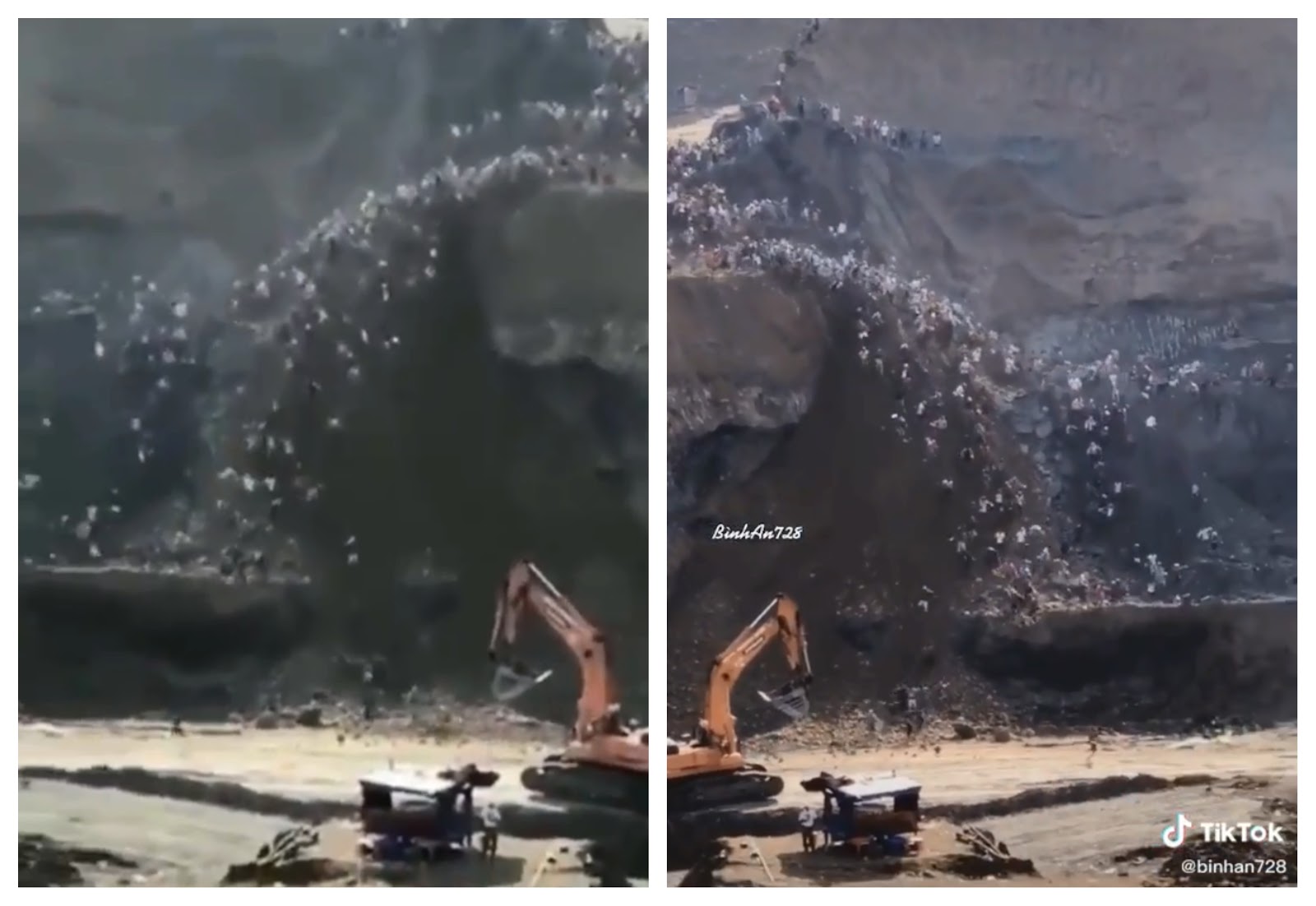 Chinese-language comments on this YouTube post with the same video suggested the clip was captured in Myanmar, as seen in the screenshot below:

The first comment translates to English as: "Reported, misleading content / It's a jade mining site in Myanmar".

The second comment translates to English as: "Fake news, this is not the China-Indian border, but a jade mine in Myanmar. If the Indians went and stopped the construction, they would have already crossed the border".

Burmese journalists in AFP's Yangon bureau identified the video as showing jade miners in Hpakant, a township known for jade mining in northern Myanmar. AFP also reported on a deadly landslide at a Hpakant jade mine in April 2019 here.

The tweet reads: "Hundreds of thousands of 'scavengers' flock to the jade mines of Myanmar, risking their lives in the hope of finding a gem amongst the rubble".

Below are two screenshots of the BBC footage: 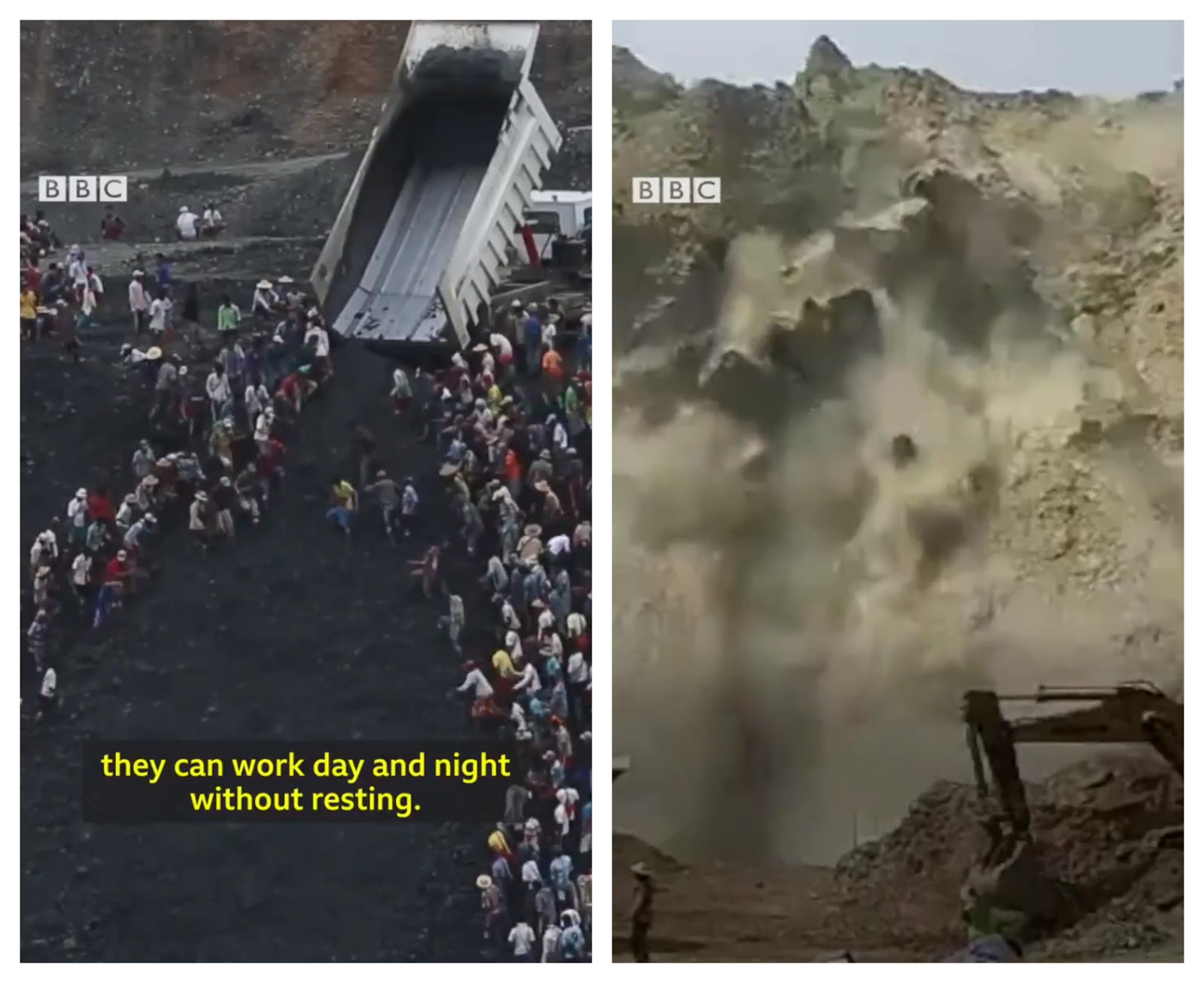 Screenshots of the footage

AFP published this video on October 23, 2015, about the jade mining industry in Myanmar, which also shows similar scenes.

Claim :   Video shows hundreds of Indians running to block Chinas illegal construction in the border with India.
Claimed By :  Posts on Facebook, Twitter and YouTube
Fact Check :  False
India China Galwan Valley Clash Galwan Valley India China Clash Indo-China Clash Indo-China Border India-China Border Fake News Fact Check
If you value our work, we have an ask: Our journalists work with TruthSeekers like you to publish fact-checks, explainers, ground reports and media literacy content. Much of this work involves using investigative methods and forensic tools. Our work is resource-intensive, and we rely on our readers to fund our work. Support us so we can continue our work of decluttering the information landscape. BECOME A MEMBER
📧 Subscribe to our newsletter here. 📣You can also follow us on Twitter, Facebook, Instagram, Youtube, Linkedin and Google News