A video of a woman speaking to camera has been viewed thousands of times in multiple posts on Facebook, Twitter and YouTube that claim it shows the victim of a high profile gang rape in Pakistan describing her ordeal. But the footage has been shared in a misleading context: it was originally posted on TikTok by a British woman, who said she was not the victim of the attack but was seeking to raise awareness of the crime.

In early September, a Pakistani woman was raped in front of her two children after her car ran out of fuel near the eastern city of Lahore, prompting nationwide protests. Here is an AFP report on the case.

Soon after, a short video of a woman speaking about the attack began circulating on Facebook, for example here, with an Urdu-language caption that translates as: "Woman who became a victim of rape on Lahore Ring Road made her statement viral." 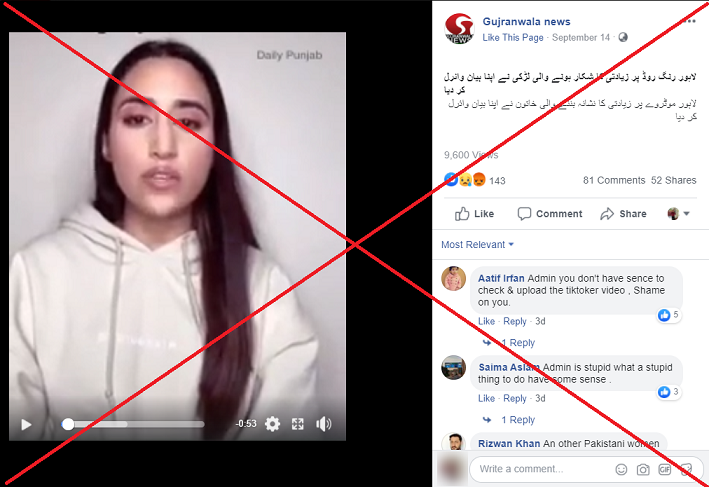 Also Read: Posts Promote 'Anti-Rape Condoms' That Are Not Available In Stores

The video shows a woman saying: "On the 10th of September 2020, I was driving in Pakistan from Lahore to Gujranwala with my two children in my car. My car broke down on the highway, it ran out of fuel and I called the police for help. While I waited for the help to arrive, some men broke the windows of my car, dragged me and my children out of the car, dragged us to a field and gang raped me multiple times in front of my children. The rapists stole my jewellery, cash and bank cards. The lead police investigator Omar Sheikh blamed me for my gangrape because…….. I should not have been travelling alone without a male figure.

"Except, this it not my story, but a story of another Pakistani woman and multiple countless Pakistani women who experience extreme sexual violence or blamed for it and are forced into silence while society continues to turn a blind eye to the everything that is going on."

The clip has been shared in a misleading context.

The woman speaking in the video is not the assault victim. A British woman named Anam Iqbal, who describes herself online as a human rights activist, originally posted the video here on her TikTok account in a bid to raise awareness about the Pakistani woman's case.

Below is a screenshot of Iqbal's TikTok post in desktop view:

A screenshot of Iqbal's TikTok post in desktop view

In response to the misleading posts about her video, Iqbal posted another video on TikTok here on September 13, 2020 to clarify that she was not the victim of the assult. She made the video to raise awareness about violence against women, she said.

The text superimposed on the video reads: "I am not the victim of the motorway incident. I was raising awareness on rape culture. Watch videos fullyyy and read articles properlyyyy before spreading misinformation." 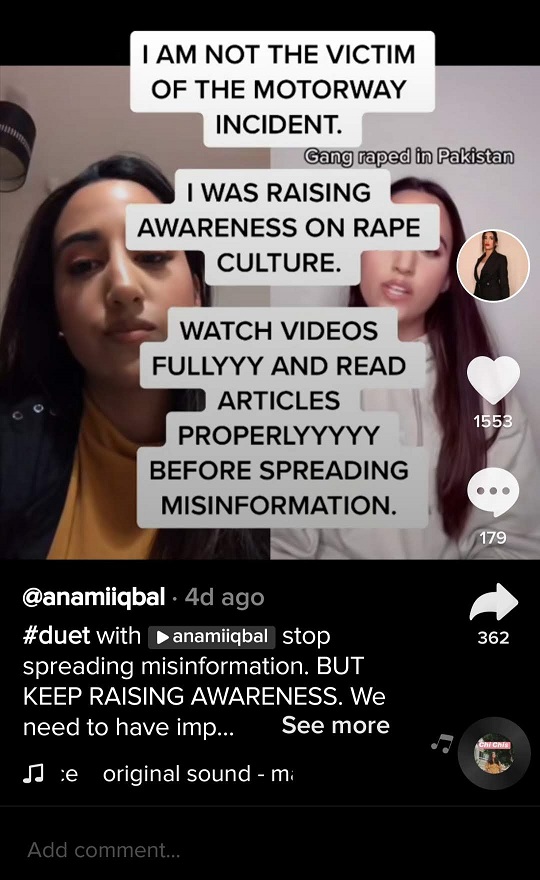 Claim :   Survivor of Lahore gang rape recounted details of her attack in a video that has gone viral.
Claimed By :  Posts on Facebook, Twitter and YouTube
Fact Check :  False
Lahore Lahore Gang Rape Sexual Assault Pakistan Sexual Abuse Crime TikTok Lahore Ring Road Anam Iqbal
If you value our work, we have an ask: Our journalists work with TruthSeekers like you to publish fact-checks, explainers, ground reports and media literacy content. Much of this work involves using investigative methods and forensic tools. Our work is resource-intensive, and we rely on our readers to fund our work. Support us so we can continue our work of decluttering the information landscape. BECOME A MEMBER
📧 Subscribe to our newsletter here. 📣You can also follow us on Twitter, Facebook, Instagram, Youtube, Linkedin and Google News