A video of a man breaking windows has been viewed tens of thousands of times in multiple posts on Facebook alongside a claim it shows a man who smashed a mosque's windows in England because he "hates Islam". The claim is false; the video has circulated in reports about a man who broke a shop's windows in Poland in September 2017.

The post's Indonesian-language caption translates to English as: "A Man In England Who Hates Islam Broke Mosque Windows, But Allah Directly Punished Him. Watch The Video Until the End."

The Indonesian-language text superimposed in the video is the same as the caption. 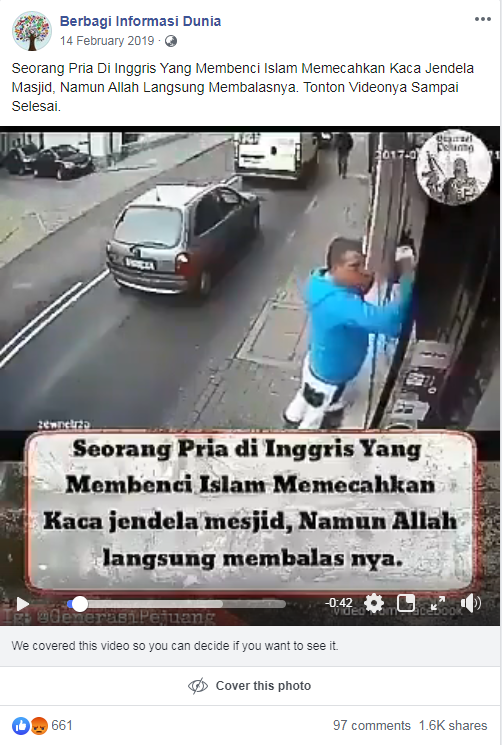 The same video has been shared on Facebook since 2017 here, here and here, where it has been viewed more than 40,000 times.

The claim is false; the video has previously circulated in reports about a man who broke windows of a shop in Lubliniec, Poland, in September 2017.

"Info from Licensor: "The man in the video has broken the window of our shop twice. The first time was 2 weeks ago on September 9, 2017 and this week on Thursday he did it again. Another person called the police and after when the man decided to escape and a car hit him on the street. An ambulance transported him to the hospital with some minor injuries."

There is a time stamp in the top right-hand corner of the video, which indicates the vandalism occurred on September 21, 2017, at about 2:01 pm local time.

Lubliniec is a town in southern Poland.

ALSO READ: No, This Is Not Ravish Kumar Disguised As A Woman At Shaheen Bagh

Below is a screenshot comparison of the video in the misleading post (L) and the ViralHog video (R):

Polish media Fakt24 and Wirtualna Polska published a report about the incident on September 25, 2017, here and here, saying it happened on September 21, 2017, and the vandal was a 27-year-old man from Lubliniec.

The location of the vandalism corresponds with this road in Lubliniec on Google Street View.

Claim Review :   Video captures man who hates Islam vandalising a mosque in England.
Claimed By :  Social Media pages
Fact Check :  False
England Mosque Islamophobia Islam Poland Vandalise video Viral video Fake News Allah
If you value our work, we have an ask: Our journalists work with TruthSeekers like you to publish fact-checks, explainers, ground reports and media literacy content. Much of this work involves using investigative methods and forensic tools. Our work is resource-intensive, and we rely on our readers to fund our work. Support us so we can continue our work of decluttering the information landscape. BECOME A MEMBER
📧 Subscribe to our newsletter here. 📣You can also follow us on Twitter, Facebook, Instagram, Youtube, Linkedin and Google News