An article circulating on Facebook claims that Microsoft co-founder Bill Gates said a COVID-19 vaccine could kill almost one million people, citing an interview he gave. This is false; Gates was talking about vaccine safety and the potential for side effects, and gave a hypothetical figure to illustrate the number of people who could possibly be affected by them worldwide.

"WATCH: Bill Gates Admits His COVID-19 Vaccine Might KILL Nearly 1,000,000 People," says the headline of this April 30, 2020 article, which goes on to claim that he "recently admitted his vaccine for coronavirus (COVID-19) is less effective in the elderly and will most likely result in the death or maiming of 700,000 people." 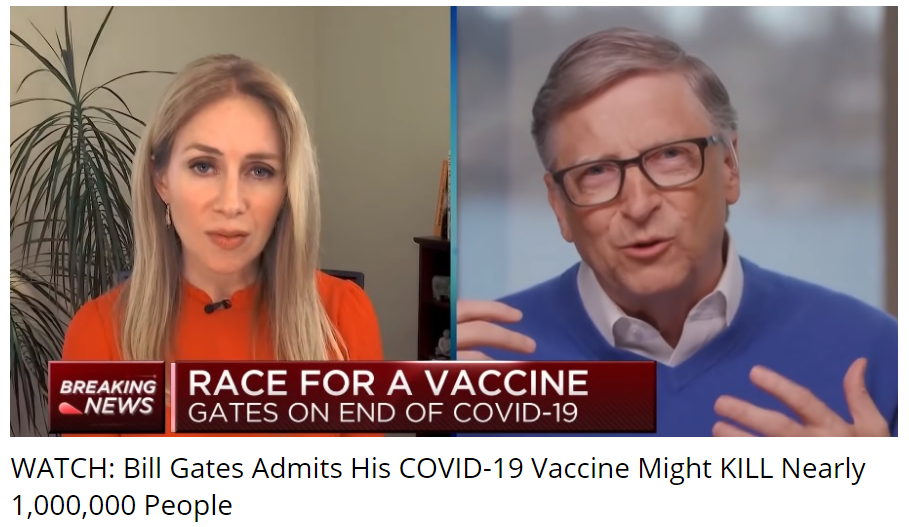 There is currently no vaccine for COVID-19, the disease caused by the novel coronavirus, which has killed more than 315,000 people worldwide since it emerged in China in late 2019.

But Gates is a leading voice on the push for a vaccine for COVID-19 and he has committed more than $300 million to novel coronavirus response efforts. His stance, however, has made him a target of anti-vaccine campaigners and other groups who have implicated him in various conspiracy theories about the crisis.

A review of the clip of a CNBC interview with Gates embedded in the article makes clear that he did not refer to a potential one million deaths from a vaccine, nor did he say that a COVID-19 vaccine would be less effective for the elderly.

"The efficacy of vaccines in older people is always a huge challenge. You know, it turns out the flu vaccine isn't that effective in elderly people. Most of the benefit comes from younger people not spreading it because they're vaccinated," Gates said in the interview.

"Here, we clearly need a vaccine that works in the upper age range, because they're most at risk of that. And doing that so that you amp it up so it works in older people, and yet you don't have side effects. You know, if we have, you know, one in 10,000 side effects, that's, you know, way more -- 700,000, you know, people -- who will suffer from that," he said.

"So, really understanding the safety at gigantic scale across all age ranges… it's very, very hard."

Gates has been the subject of several inaccurate claims in recent weeks, including a manipulated photo of the Gates Foundation, a letter about the novel coronavirus falsely attributed to him, and a false warning about a "Bill Gates vaccine."

Claim :   Bill Gates claimed the COVID-19 vaccine could kill nearly a million people.
Claimed By :  The Clover Chronicle on Facebook
Fact Check :  False
COVID-19 COVID-19 Vaccine Coronavirus Vaccine Coronavirus Bill Gates Bill & Melinda Gates Foundation
If you value our work, we have an ask: Our journalists work with TruthSeekers like you to publish fact-checks, explainers, ground reports and media literacy content. Much of this work involves using investigative methods and forensic tools. Our work is resource-intensive, and we rely on our readers to fund our work. Support us so we can continue our work of decluttering the information landscape. BECOME A MEMBER
📧 Subscribe to our newsletter here. 📣You can also follow us on Twitter, Facebook, Instagram, Youtube, Linkedin and Google News