A widely-circulated image claims to reveal the ingredients contained in this year's flu shots. The alleged ingredients include mercury, antifreeze, phenol, animal blood, animal viruses, and formaldehyde. Trace amounts of formaldehyde are present in flu vaccines authorized in the US this year, and the mercury-based product thimerosal is present in some of them. The photo's list of ingredients is misleading and mostly inaccurate.

"Research side effects & ingredients before poisoning yourself!" warns a photo of a sign mimicking public health advisory communications.

The photo, which was shared several thousand times on social media in Canada and the US, shows no visual clues as to the location of the sign. The photo was shared in past years, and resurfaced in the United States in April 2020, possibly as a result of the public debate around the search for a COVID-19 vaccine. 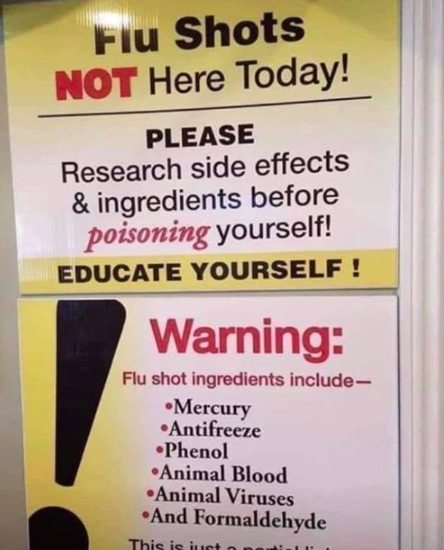 The ingredients list that appears below the disclaimer is mostly inaccurate.

Vaccines in the United States must go through a rigorous multi-step evaluation before they can be commercialized or administered in the country. Flu viruses are constantly changing, so flu shots change annually; variations in their composition are guided by the World Health Organization's (WHO) recommendations for that year, although the composition may be maintained over some years.

Flu vaccine composition for the entire northern hemisphere is decided by the WHO in February of every year at meetings in which the US Food and Drug Administration (FDA) participates. Manufacturers propose new vaccines in the following months.

Here we examine each ingredient allegedly present in flu shots.

Vaccines do not contain mercury, although some do contain a mercury-containing organic compound named thimerosal. Thimerosal is used as a preservative in vials of vaccines that contain more than one dose, in order to protect the vaccine from outside bacteria, according to the CDC.

Thimerosal contains ethylmercury, which is cleared from the human body more quickly than methylmercury, the type of mercury found in certain fish.

Of the nine flu vaccines approved for the United States this year, four contain thimerosal.

AFP Fact Check has debunked false claims about thimerosal in the past.

Ethylene glycol is not listed in the composition of any vaccine currently licensed for use in the United States.

Phenol is a family of organic compounds that is used for applications ranging from wood preservatives and textiles to mouthwash, according to the Encyclopedia Britannica.

Like thimerosal, "Phenol is used as a preservative in some vaccines, but not in any of the seasonal influenza vaccines licensed by the FDA," Monique Richards, a spokeswoman for the FDA, told AFP by email.

Phenol is not listed as an ingredient in any of this season's nine approved influenza vaccines. It is used as a preservative in three FDA-approved vaccines: Pneumovax 23, Typhim Vi, and ACAM2000, for the prevention of pneumococcal disease, typhoid fever, and smallpox respectively.

Vaccines do not contain animal blood. This ingredient may be a reference to the fact that vaccines are often grown in egg material. "Most flu shots and the nasal spray flu vaccine are manufactured using egg-based technology," according to the CDC. Although culture materials are removed, some traces of egg protein remain.

For patients with severe allergic reactions to egg, the CDC's National Advisory Committee on Immunization Practices recommends getting the vaccine under the supervision of a health care provider. For the 2019-2020 season, two egg-free flu vaccines are also available. This is mainly a precaution, as studies indicate that severe allergic reactions are unlikely: the rate of anaphylaxis after all vaccines is 1.31 per one million vaccine doses given.

There are no animal viruses in flu shots, according to the CDC. Flu shots do contain strains of viruses, typically H1N1 or H3N2, but those are isolated in humans. The confusion may stem from the fact that H1N1 is commonly called swine flu, but according to the CDC, contact with pigs is not a precondition for catching H1N1 flu. The WHO recommends certain viruses based on findings compiling data from influenza centres worldwide, and each country is free to choose which viruses to include in flu shots.

Many flu shots available in the US do contain traces of formaldehyde. Formaldehyde is a colourless gas that emanates from household products, construction material or cigarette smoke.

Although large amounts of formaldehyde are detrimental to human health, Richards told AFP that "the amount of formaldehyde present in some vaccines is so small compared to the concentration that occurs naturally in the body that it does not pose a safety concern. "

Apart from traces of formaldehyde and thimerosal in some vaccines, the other ingredients on the widely shared photo are not found in flu shots commercialized in the United States. The CDC estimates that influenza caused approximately 490,600 hospitalizations and 34,200 deaths in 2018-2019.

Claim Review :   The flu vaccine contains Mercury, Antifreeze, Phenol, Animal Blood, Animal Viruses and Formaldehyde.
Claimed By :  Facebook
Fact Check :  Misleading
COVID-19 COVID-19 Vaccine Coronavirus Coronavirus Vaccine USA Coronavirus USA COVID-19 USA FAKE NEWS FactCheck
If you value our work, we have an ask: Our journalists work with TruthSeekers like you to publish fact-checks, explainers, ground reports and media literacy content. Much of this work involves using investigative methods and forensic tools. Our work is resource-intensive, and we rely on our readers to fund our work. Support us so we can continue our work of decluttering the information landscape. BECOME A MEMBER
📧 Subscribe to our newsletter here. 📣You can also follow us on Twitter, Facebook, Instagram, Youtube, Linkedin and Google News