Posts on social media claim that people who have been vaccinated against the flu in the last 10 years will test positive for COVID-19. This is false; experts say the novel coronavirus that causes the disease is unrelated to the flu, and that data on approved COVID-19 tests does not support the claim.

"'If you've gotten flu shots during the past ten years, you will test positive for the Wuhan strain of the Covid-19 flu' -Dr. Rashid Buttar," a Facebook post says.

The claim can also be found on Facebook here and here, on Instagram here and on Twitter here, and has been circulating since at least April 18, 2020. 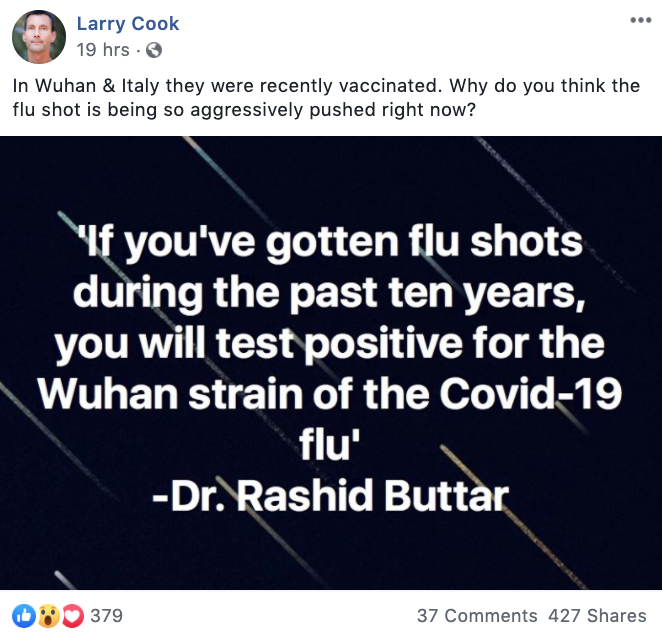 "Both the molecular (viral detection) tests and the serologic (antibody) tests have been and are being validated and have demonstrated no cross-reactivity with antibodies generated from previous influenza vaccination," Sanders told AFP via email.

ALSO READ: Fake Hiring Contacts Viral As Unemployment Surges In US Due To COVID-19

Dr Jacco Boon, an infectious disease professor at Washington University School of Medicine in St. Louis, agreed that the claim is false.

"COVID-19 is caused by the SARS-CoV-2 and this virus is unrelated to the influenza virus," he said. 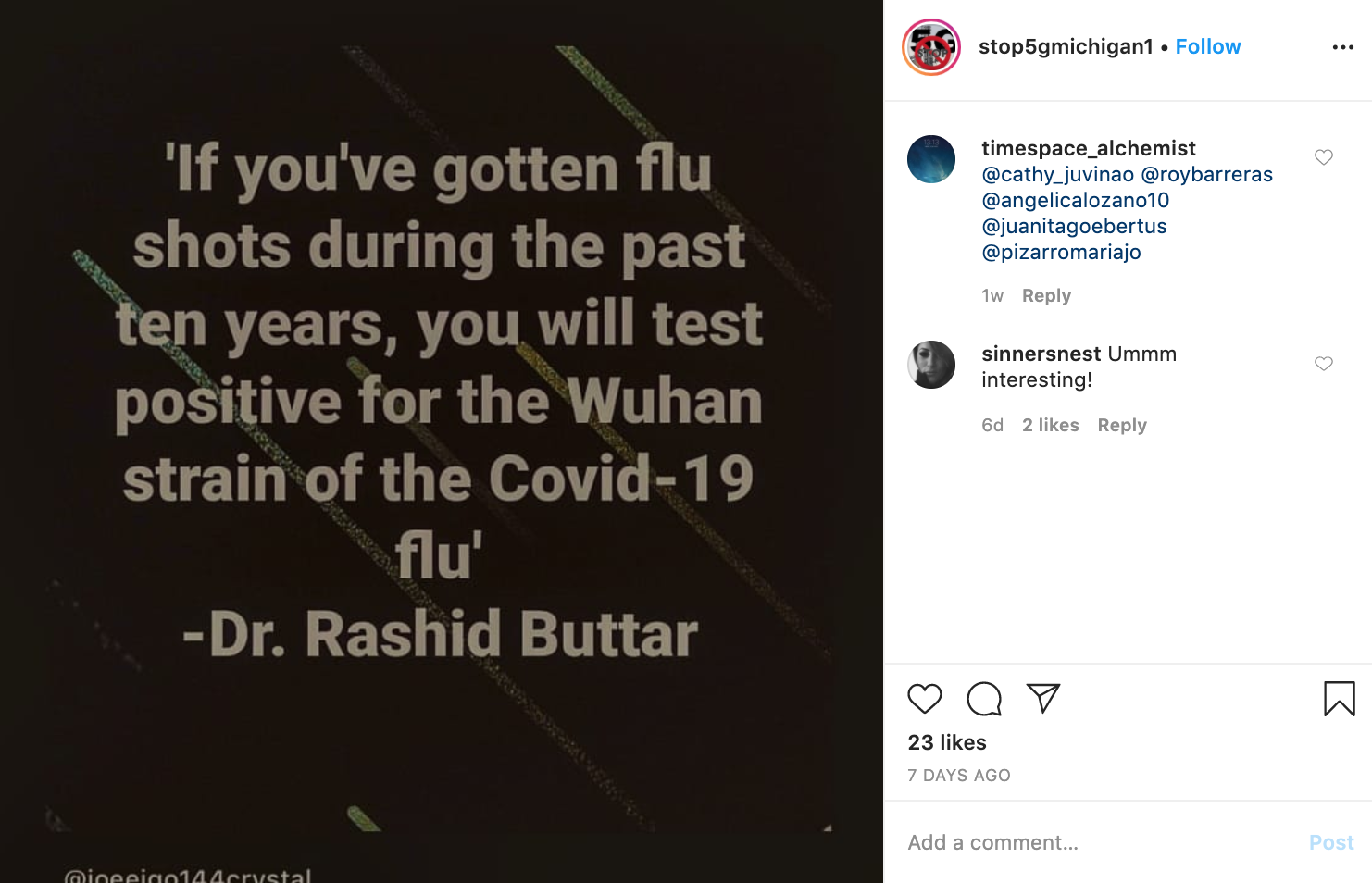 The physician cited in the posts, Dr. Rashid Buttar, has been reprimanded multiple times by the North Carolina Medical Board (NCMB) and received a warning letter from the US Food and Drug Administration for peddling unapproved, misbranded and adulterated drugs.

Among Buttar's disputed treatments was intravenous administration of hydrogen peroxide for cancer patients, who later died.

Buttar claims that flu vaccines cause false positive results for COVID-19 in multiple videos, many of which have been removed for violating YouTube's content standards.

However, these false claims on flu vaccination are still available online, as others have recorded them.

"The studies clearly show that if you've had a flu shot, you're gonna test positive for COVID-19," Buttar says in audio included with this clip.

In another clip, Buttar cites two studies as evidence for the claim. The first is a study on cats, not people, from 1984 -- 35 years before the novel coronavirus was discovered and any COVID-19 tests were carried out.

Testing technology has improved significantly since the study was conducted, and the false positives were the result of vaccine contamination from the cell culture itself, not interaction between viruses, Sanders and Boon said.

Sanders noted that the second study was published seven years prior to the emergence of COVID-19, and only evaluated children.

"The majority of the noninfluenza respiratory virus detections were rhinoviruses and coxsackie/echoviruses, not coronaviruses," and the study's findings "have not been repeated or expanded upon," he said.

The current tests for COVID-19 have been validated, Sanders said, and "the receipt of TIV should not be and has not been shown to be associated with COVID-19 nor false positive testing."

Approved 2019-2020 flu season immunizations are listed on the US Centers for Disease Control and Prevention website here.

Claim :   People who have been vaccinated against the flu in the last 10 years will test positive for COVID-19.
Claimed By :  Facebook, Instagram, Twitter
Fact Check :  False
COVID-19 Coronavirus COVID-19 India Coronavirus India Coronavirus USA COVID-19 USA COVID-19 Vaccine Coronavirus Vaccine FactCheck Fake News
If you value our work, we have an ask: Our journalists work with TruthSeekers like you to publish fact-checks, explainers, ground reports and media literacy content. Much of this work involves using investigative methods and forensic tools. Our work is resource-intensive, and we rely on our readers to fund our work. Support us so we can continue our work of decluttering the information landscape. BECOME A MEMBER
📧 Subscribe to our newsletter here. 📣You can also follow us on Twitter, Facebook, Instagram, Youtube, Linkedin and Google News