After Joe Biden officially named Kamala Harris as his choice for vice president, a quote by the California Senator vowing to track down and punish all those who supported President Donald Trump resurfaced on social media. This quote is fabricated; it originates from a website known for fictitious political stories, and there is no record of Harris publicly making the statement.

"And once Trump's gone and we have regained our rightful place in the White House, look out if you supported him and endorsed his actions, because we'll be coming for you next," reads a quote attributed to Harris in Facebook posts shared on August 11, 2020.

"After We Impeach, We Round Up the Trump Supporters," more ominous versions of the quote add.

Also Read: No, Kamala Harris' Parents Are Not In This Photo With Her 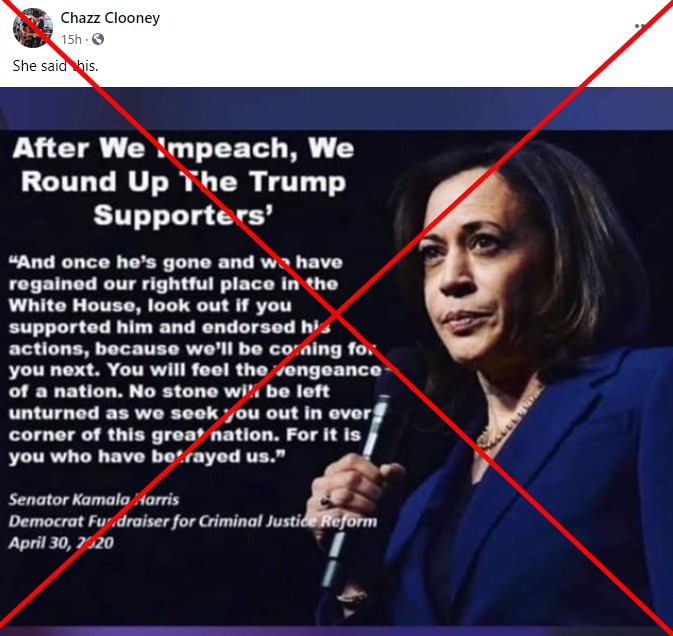 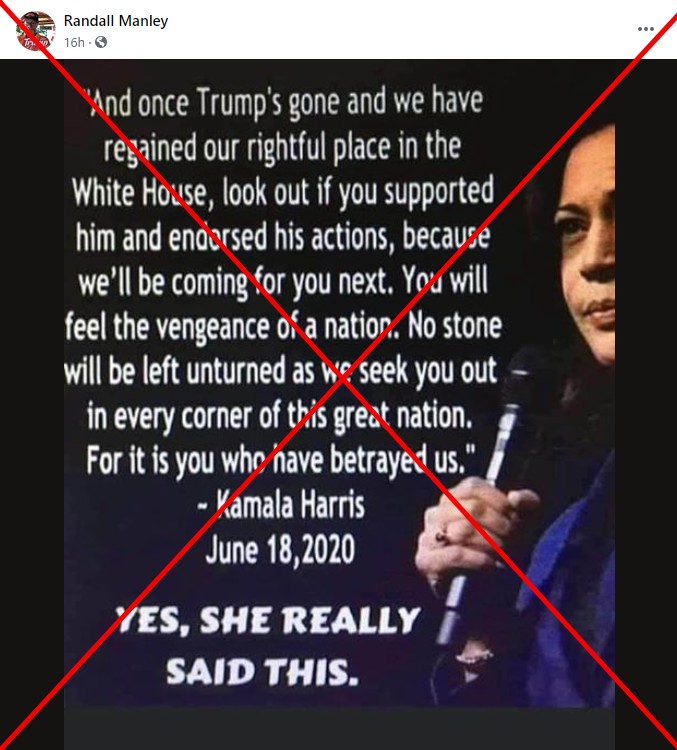 While most social media posts using the quote in August 2020 claimed that Harris made her vengeful promise on April 30, 2020, some alleged the quote was from June 18, 2020.

The same quote had already made rounds on social media in August 2019, but was not real then and is not real in 2020.

The quote was invented for an article published on August 7, 2019 on the satirical news website, bustatroll.org.

The fictional piece claimed: "While giving a speech on the effectiveness of zero punishment prosecutions, she (Harris) veered off script to talk about impeaching our president and describe in detail one 'crime' she would not hesitate to punish."

"Everything on this website is fiction," a disclaimer warns on the website's "About Us" section.

The disclaimer adds that bustatroll.org "is a subsidiary of the 'America's Last line of Defense' network of parody, satire, and tomfoolery." The ambiguous nature of this network's tone has led much of its content to be taken seriously by online users.

There are no records of Harris at a Democrat fundraiser for Criminal Justice Reform on April 30, 2020. Harris's public communications that day focused on legislation aiming to combat racial and ethnic disparities caused by the COVID-19 pandemic.

There is also no evidence Harris said the quote on June 18. Her main public appearance that day focused on a Supreme Court ruling blocking Trump's attempt to end the Deferred Action for Childhood Arrivals program.

After Biden announced Harris as his running mate on August 11, 2020, making her the first black and Asian-American vice-presidential candidate, AFP Fact Check also found posts falsely suggesting that the California senator could not be president because her parents were born outside the US.