Social media posts shared thousands of times claim that Senator Kamala Harris, Joe Biden's running mate, could not become president because her parents hailed from abroad. This is false; she was born in the United States, making her constitutionally eligible to be both vice president and president.

"If crazy Joe cannot serve his full term, Kamala cannot by constitutional law become President," says an August 5, 2020 Facebook post. "She is an anchor baby, mother is from India, father is Jamaican, and neither were american citizens at time of her birth." 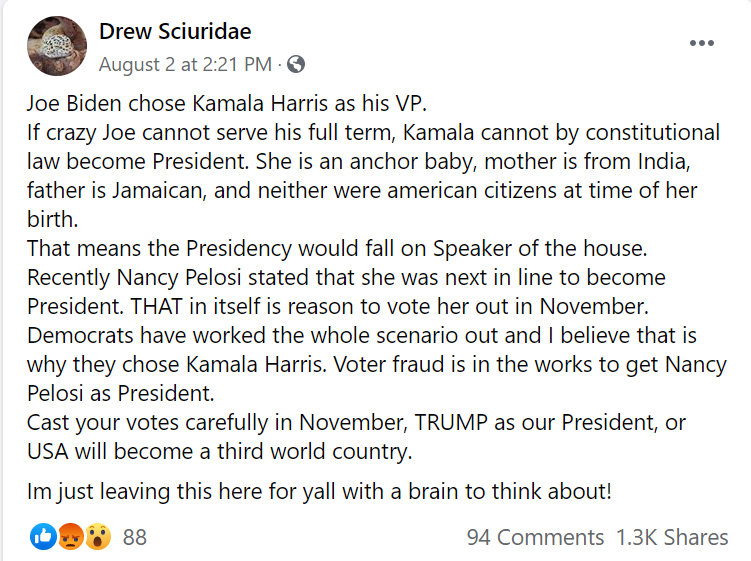 The claim has been shared elsewhere on Facebook, including here and here.

Biden is the presumptive Democratic challenger to Republican Donald Trump in the November 3 election, and will turn 78 just days later. If he is elected, he would be the oldest man ever to assume the US presidency, giving his choice of running mate added significance.

It is true that Harris's father, Donald Harris, was born in Jamaica, and her mother, Shyamala Gopalan, was originally from southern India, as Harris wrote in her autobiography.

But that is irrelevant to her constitutional qualification for the nation's highest elected office.

Article 2, Section 1 of the Constitution says that "no person except a natural born citizen, or a citizen of the United States" shall be eligible for the presidency. They must also be at least 35 years old.

Harris, 55, was born in Oakland, California.

Under that clause and an 1898 Supreme Court ruling, "anyone born on US soil and subject to its jurisdiction is a natural born citizen, regardless of parental citizenship," Cornell Law School's Legal Information Institute says.

Contrary to what the claims on Facebook suggest, Harris could not at first become vice president if she failed to meet requirements for the presidency.

David A. Super, Carmack Waterhouse Professor of Law and Economics at the Georgetown University Law Center, said that "no person constitutionally ineligible to the office of President shall be eligible to that of Vice-President of the United States," according to the 12th Amendment to the Constitution.

The Facebook post is correct in saying that the speaker of the House of Representatives -- currently Democrat Nancy Pelosi -- follows the vice president in succession to the presidency. Congress has determined by statute that this occurs in case of "Removal, Death, Resignation or Inability, both of the President and Vice President," Super said.

Harris, only the second African American woman ever elected to the US Senate, was among those who ran against Biden for the Democratic nomination.

Claim :   Kamala Harris cannot become US president because her parents hailed from abroad
Claimed By :  Facebook posts
Fact Check :  False
Kamala Harris Joe Biden Donald Trump Nancy Pelosi US Elections 2020 US Election 2020 US Presidential Elections US Presidential Elections 2020 Presidential Elections 2020 Mike Pence Democrats Republicans Fake News Fact Check
If you value our work, we have an ask: Our journalists work with TruthSeekers like you to publish fact-checks, explainers, ground reports and media literacy content. Much of this work involves using investigative methods and forensic tools. Our work is resource-intensive, and we rely on our readers to fund our work. Support us so we can continue our work of decluttering the information landscape. BECOME A MEMBER
📧 Subscribe to our newsletter here. 📣You can also follow us on Twitter, Facebook, Instagram, Youtube, Linkedin and Google News