A campaign ad for Donald Trump features footage of Dr Anthony Fauci appearing to praise the US president's coronavirus response. But Fauci -- a leading infectious diseases expert and member of the Coronavirus Task Force -- said he has never endorsed a political candidate, and that the remarks were taken out of context.

"President Trump tackled the virus head on, as leaders should," says a narrator in the October 10, 2020 advertisement, which then cuts to a clip of Fauci saying: "I can't imagine that... anybody could be doing more." 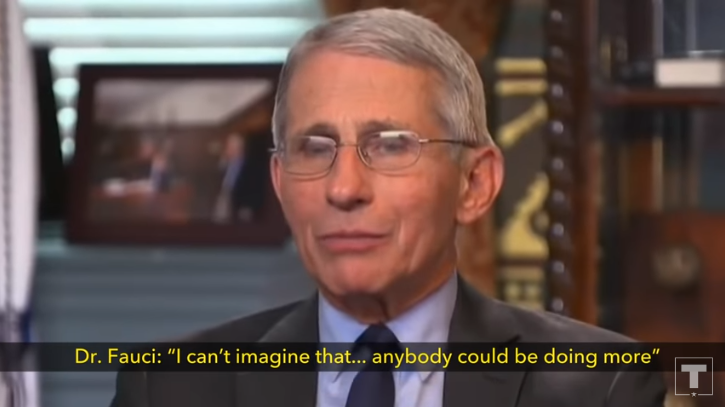 A screenshot of a Trump campaign ad taken on October 12, 2020

Fauci, 79, has advised six presidents since becoming head of the National Institute of Allergy and Infectious Diseases in 1984, and led US government efforts to counter diseases including HIV/AIDS. But he has become far more widely known during the coronavirus crisis, which has killed more than 214,00 people in the United States.

The doctor -- whose direct remarks on failures in America's response to the virus have drawn him into conflict with Trump -- has been a popular target for disinformation.

Also Read: How Factually Correct Were Mike Pence And Kamala Harris At The VP Debate?

Fauci issued a statement in response to the ad, which uses footage of him from a March 2020 interview on Fox News.

"In my nearly five decades of public service, I have never publicly endorsed any political candidate," Fauci said in the statement.

"The comments attributed to me without my permission in the GOP campaign ad were taken out of context from a broad statement I made months ago about the efforts of federal public health officials," he said.

Fauci's assertion is backed by his full remarks from the interview with Fox's Mark Levin.

"I mean, we're talking about all-hands on-deck is that I, I as one of many people on a team, I'm not the only person, since the beginning that we even recognized what this was, I have been devoting almost full time on this -- almost full time," Fauci said.

"I'm down at the White House virtually every day with the Task Force. I'm connected by phone throughout the day and into the night. When I say night, I'm talking 12, one, two in the morning. I'm not the only one. There's a whole group of us that are doing that. It's every single day," he said.

"So I can't imagine that, that under any circumstances, that anybody could be doing more. I mean, obviously, we're fighting a formidable enemy -- this virus. This virus is a serious issue here."

AFP Fact Check has previously debunked a Trump campaign ad that featured doctored images of Joe Biden, as well as the campaign's false claims that clips showed the Democratic candidate referring to the president's supporters as the "dregs of society," and botching the Pledge of Allegiance.

Claim Review :   Dr Anthony Fauci praised US president Donald Trumps coronavirus response.
Claimed By :  Donald Trump campaign
Fact Check :  Misleading
US Elections 2020 Anthony Fauci Joe Biden Donald Trump Kamala Harris Mike Pence US Elections 2020 US Elections 2020 US Presidential Elections US Presidential Elections American Elections Democrats Republicans
If you value our work, we have an ask: Our journalists work with TruthSeekers like you to publish fact-checks, explainers, ground reports and media literacy content. Much of this work involves using investigative methods and forensic tools. Our work is resource-intensive, and we rely on our readers to fund our work. Support us so we can continue our work of decluttering the information landscape. BECOME A MEMBER
📧 Subscribe to our newsletter here. 📣You can also follow us on Twitter, Facebook, Instagram, Youtube, Linkedin and Google News