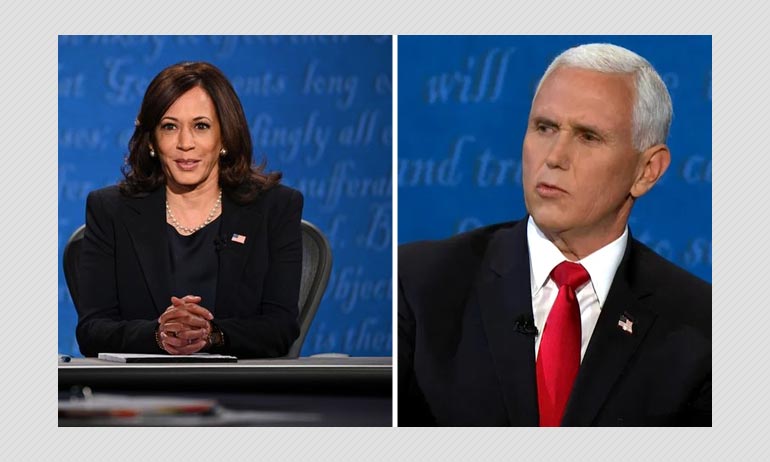 Mike Pence and Kamala Harris went head to head in the US vice presidential debate on Wednesday, sparring over issues including the Trump administration's response to the coronavirus, taxes and health care.

AFP Fact Check breaks down some of the main topics from the debate below.

Senator Harris said US President Donald Trump and Pence knew about the dangers of the coronavirus -- which has killed more than 211,000 people in America -- in late January, but "covered it up" and "minimized the seriousness of it."

This is supported by tapes of interviews with Trump conducted by investigative journalist Bob Woodward, where the president conceded the virus was deadly, calling it "the plague." In a March 19 call with Woodward, Trump said: "I wanted to always play it down," and "I still like playing it down, because I don't want to create a panic."

Pence -- who is in charge of the administration's coronavirus response -- countered that, "From the very first day, President Donald Trump has put the health of America first," saying he "suspended all travel from China," and claiming that Biden criticized the move as "xenophobic."

The vice president's statement on travel is inaccurate. Rather than barring all travel from China, Trump imposed restrictions that were subject to multiple exemptions. A New York Times analysis found that tens of thousands of travelers entered the US from China in the two months following the restrictions.

Biden has accused Trump of trading in xenophobia in tweets this year, but it is not clear if he was specifically referring to the president's China travel measures.

"Joe Biden is going to raise your taxes," Pence said. This is partly true, but depends on income.

The Urban-Brookings Tax Policy Center said Biden's tax plan would bring in about $4 trillion in revenues over the next 10 years, and that: "Under his plan, the highest-income households would see substantially larger tax increases than households in other income groups, both in dollar amounts and as share of their incomes."

This echoes Harris's response to Pence's claim, in which she pledged: "Joe Biden will not raise taxes on anyone who earns less than $400,000 a year."

Neither Pence's claim or Harris's response, however, can be fully verified, as Congress would have to pass a new tax law to institute Biden's plan, which would affect both corporate and personal tax liability.

Harris said Trump is "in court right now trying to get rid of the Affordable Care Act, which means you will lose protections if you have pre-existing conditions." This is accurate.

Trump's Justice Department has argued in a brief to the US Supreme Court that the Affordable Care Act (ACA) should be struck down, which would, as Harris said, end the protection for people with pre-existing conditions that it currently provides.

Pence responded that, "President Trump and I have a plan to improve health care and protect pre-existing conditions." No such plan has been presented to Congress.

On September 24, however, Trump signed an executive order stating that it is US policy to "to ensure that Americans with pre-existing conditions can obtain the insurance of their choice at affordable rates." But legal experts say it is not a replacement for the protection provided by the ACA.

"President Trump unleashed the American military and our armed forces destroyed the ISIS caliphate and took down their leader al-Baghdadi without one American casualty," Pence said, referring to the Islamic State (IS) group, which once controlled major portions of Iraq and Syria.

Pence was correct that IS leader Abu Bakr al-Baghdadi died in a US raid, but the rest of his statement is inaccurate. It was not the United States but local ground forces in Iraq and Syria that played the decisive role in victories over the jihadists, with America focusing on providing them with air support, equipment and training.

Pence said that Biden would ban fracking and abolish fossil fuels, harming jobs in the US energy industry.

This is a longstanding but misleading allegation against Biden stemming from a Democratic Party candidates' debate last year in which he said he would not grant subsidies to either sector. He has since said he would not shut down existing projects.

In a debate this year, Biden said: "No more. No new fracking." And during an interview with a Pittsburgh-based television station this year, he was again asked if he intended to stop fracking.

"No I wouldn't shut down this industry," Biden answered.

"I know our Republican friends have tried to say I said it, I said I would not do any new leases on federal land. Ninety percent of the leases are not on federal land to begin with.

Biden's campaign has also denied that there are plans to ban fracking, saying his clean energy plan will create hundreds of thousands of jobs.