Facebook and Instagram posts shared thousands of times claim that vaccines directly violate the Nuremberg Code, a set of research ethics principles for human experimentation established after World War II. This claim is false; medical ethics and legal experts said the principles, named after the Nuremberg trials, are compatible with vaccination.

"Vaccines are in direct violation of the Nuremberg Code," a flyer photographed and shared on Facebook in Canada on May 25, 2020 warns. 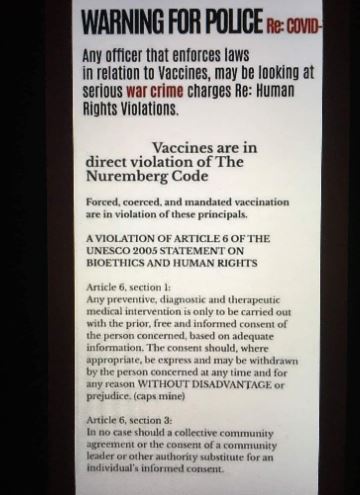 Similar claims were shared from Facebook accounts in the US state of Florida, France and South Africa. The claim also circulated on Instagram here.

The posts have gained traction amid debate over the global search for a vaccine for the novel coronavirus.

The Nuremberg Military Tribunals, held between November 1945 and October 1946, included the USA vs. Karl Brandt, in which 23 doctors and administrators were prosecuted for their roles in conducting medical experiments on concentration camp inmates. The verdict included a detailed description of "Permissible Medical Experiments". These 10 points became known as the Nuremberg Code.

The first point specifically upholds the principle of voluntary consent.

"The Nuremberg Code is about doing human experiments, not vaccination," said Dr Jonathan D. Moreno, professor of bioethics at the University of Pennsylvania.

"The Nuremberg Code is perfectly compatible with vaccination."

Steven Joffe, a professor of medical ethics at the University of Pennsylvania agreed. "Vaccines are in no way a violation of the Nuremberg Code," he said.

The posts on Facebook and Instagram also point to principles outlined by UNESCO, the United Nations Educational, Scientific and Cultural Organization.

At its general conference in 2005, UNESCO put forward a Universal Declaration on Bioethics and Human Rights with the aim to "provide a foundation for humanity's response to the ever-increasing dilemmas and controversies that science and technology present for humankind and for the environment."

Article 6, referenced in the posts, says: "Any preventive, diagnostic and therapeutic medical intervention is only to be carried out with the prior, free and informed consent of the person concerned, based on adequate information."

In legal terms, informed consent is a different standard than voluntary consent according to Wendy E. Parmet, Faculty Director at the Center for Health Policy at Northeastern University.

"These are complicated arguments that are completely reduced and simplified in a way that is completely misleading in the post," Parmet said.

Lawrence Gostin, a professor who specializes in public health law at Georgetown University, also said the claim was "utterly false" as a person does not have the right to decline treatment and then transmit an illness to others.

"Bioethics principles require informed consent but not if the individual poses a risk to others," he told AFP by email.

The posts go on to claim that "forced, coerced and mandated vaccination" violates the principles of the Nuremberg Code and that officers enforcing laws related to vaccines could face war crime charges.

There is no current discussion of compulsory vaccination in Canada or the US.

Also Read: No, COVID-19 Patients In Guinea Did Not Die After Taking Trial Vaccine

Vaccination in Canada is only mandated for students in Ontario, the country's most populous province, and in the Atlantic province of New Brunswick. Legislation in both provinces include exemption clauses based on medical, religious, or moral grounds, though Bill 11, currently under debate in New Brunswick, would change the exemption rules.

Nationwide, vaccination is highly recommended and increasing coverage remains a goal for Canada as outlined in the National Immunization Strategy.

In the US, there is legislation in all 50 states requiring vaccination for children wishing to attend school and for permanent residency applicants.

However, all states allow exemptions for medical reasons -- if a child is allergic to a vaccine, for instance.

The District of Columbia and 45 states grant exemptions on religious grounds, and 15 states allow philosophical exemptions for personal, moral, or other beliefs, according to the National Conference of State Legislatures, a body that compiles legislation from across the US.

Parmet said there is "tension" between informed consent principles and mandatory vaccination, but "the courts have continued to uphold these vaccine laws."

Health Canada's Biologic and Radiopharmaceutical Drugs Directorate reviews the safety and efficacy of all vaccines before they are released to the public. To obtain authorization companies must prove, "the benefits of the vaccine outweigh any identified risks."

In the US, this process is overseen by the Food and Drug Administration, with three phases of clinical trials common for new vaccines.

"You have to go through an elaborate reporting process once you start the vaccination process," Moreno explained.

Both Canada and the US carefully document adverse events following immunization. The most recent report from Canada is available here. Data from the US can be downloaded here.

AFP Fact Check has recently debunked other claims about vaccines, including misinformation about how to decline vaccination and false claims about the ingredients in vaccines for children.