Multiple posts shared hundreds of times on Facebook, Instagram and Twitter in July 2020 claim that Palestine has been removed from Google Maps and Apple Maps. The claim is misleading; on July 20, 2020, a Google representative told AFP that Palestine was never labelled on its maps; a cartography expert said the label "Palestine" does not tend to appear on maps in mainstream Western media or on Western mapping tools but instead is generally referred to as "West Bank" and "Gaza".

It reads: "Palestine has disappeared from both Google Maps and Apple maps with no official statement from both companies. The move comes while Israel President Benjamin Netanyahu has pledged to establish West Bank annexations that have already triggered global criticism with many countries calling it 'human rights violation'." 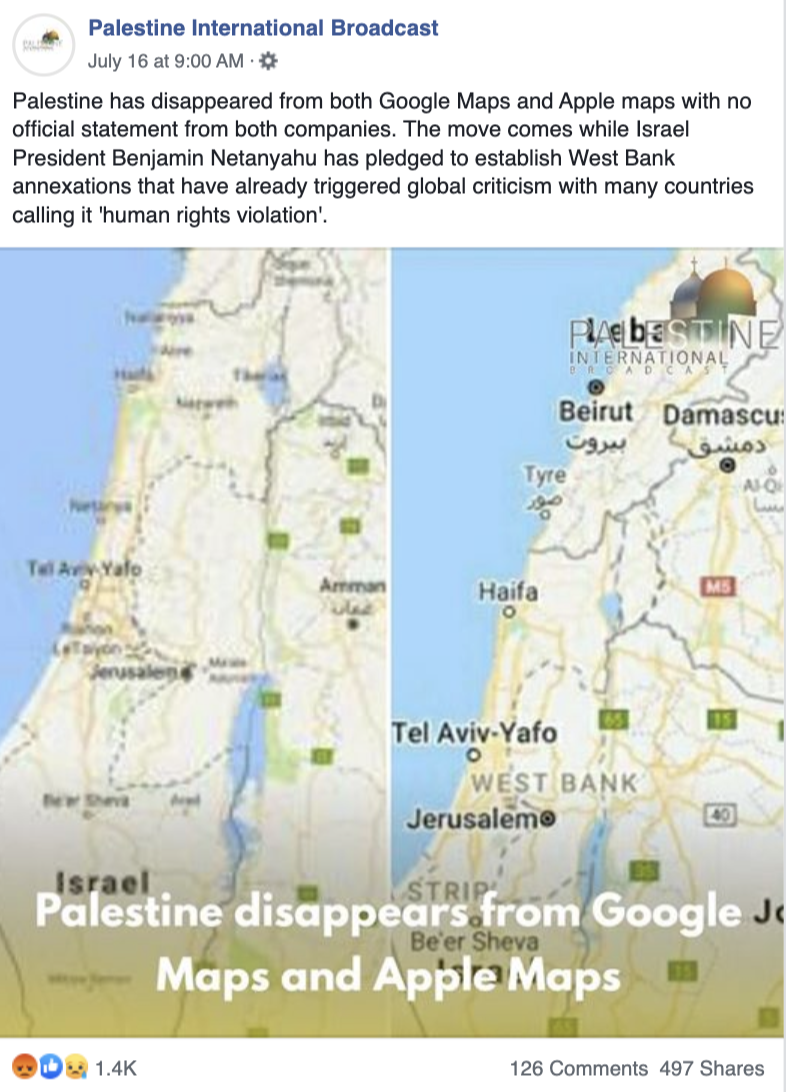 The post was shared shortly before it was reported that Israeli Prime Minister Benjamin Netanyahu intended to kick-start annexation plans in the occupied West Bank.

An identical claim was also shared here on an Australia-based Facebook page.

In response to the post, a spokesperson for Google told AFP by email on July 20, 2020 that it had not recently made changes to borders or territories in the area and has not previously used a label for Palestine on Google Maps.

The spokesperson directed AFP to two media articles from 2016; this report by technology website Engadget and this report by French newspaper Le Monde. Google has been quoted in both articles as saying Palestine never existed as a label on its mapping services.

Christine Leuenberger, a senior lecturer at Cornell University who specialises in the history and sociology of cartography in Israel and the Palestinian Territories, told AFP in an email on July 21, 2020 that "the word Palestine would not have ever been on these maps – at most the terms West Bank and Gaza."

"On maps, the name 'Palestine' is usually associated with historic Palestine before the establishment of the Israeli state and is not used in mainstream news outlets in the West," Leuenberger said.

Apple did not respond to a request for comment.

Claim :   Google and Apple removed Palestine label from its maps.
Claimed By :  Posts on Facebook, Twitter and Instagram
Fact Check :  False
Israel Palestine Israel-Palestine conflict Gaza West Bank Benjamin Netanyahu Google Apple Google Maps Apple Maps Map Fact Check
If you value our work, we have an ask: Our journalists work with TruthSeekers like you to publish fact-checks, explainers, ground reports and media literacy content. Much of this work involves using investigative methods and forensic tools. Our work is resource-intensive, and we rely on our readers to fund our work. Support us so we can continue our work of decluttering the information landscape. BECOME A MEMBER
📧 Subscribe to our newsletter here. 📣You can also follow us on Twitter, Facebook, Instagram, Youtube, Linkedin and Google News