An illustration has been shared hundreds of times in multiple Facebook and Instagram posts which claim it shows that nasal swab tests for COVID-19 can harm the blood brain-barrier, a semipermeable membrane separating blood from other fluids in the brain. The claim is misleading; experts say COVID-19 swab tests are not placed near the blood-brain barrier and do not pose a risk to human health.

The illustration was published in this Facebook post on July 7, 2020. It has been shared hundreds of times. 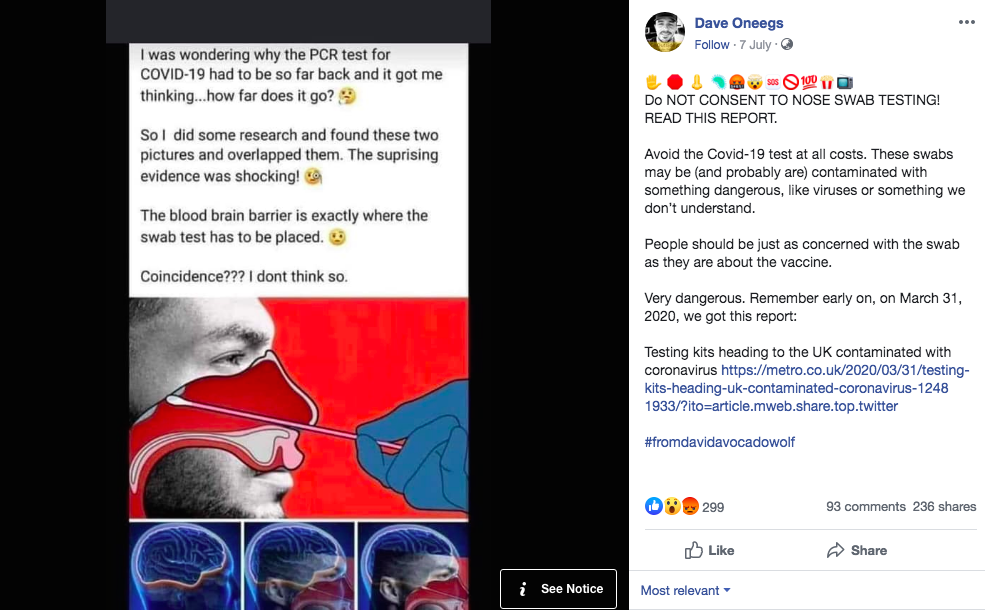 The text overlaid above the illustrations reads: "I was wondering why the PCR test for COVID-19 had to be so far back and it got me thinking…how far does it go? So I did some research and found these two pictures and overlapped them. The suprising evidence was shocking! The blood brain barrier is exactly where the swab test has to be placed."

The Facebook post's caption includes a similar message: "Do NOT CONSENT TO NOSE SWAB TESTING!

"Avoid the Covid-19 test at all costs. These swabs may be (and probably are) contaminated with something dangerous, like viruses or something we don't understand. People should be just as concerned with the swab as they are about the vaccine."

The PCR test -- formally known as the reverse transcriptase Polymerase Chain Reaction test -- is a type of COVID-19 testing technique that directly detects the virus in a person's nasal secretions or saliva, Australia's Department of Health explains here and here. The test requires a deep and vigorous swap in the mouth and nose that can be quite uncomfortable.

The claim is misleading, according to experts.

Dwyer added that while the PCR test can be "momentarily unpleasant," there is "no way that a simple swab could damage the blood brain barrier."

The Queensland Brain Institute explains here that the blood–brain barrier "provides a defence against disease-causing pathogens and toxins that may be present in our blood."

Professor John Mathews, an epidemiologist at the University of Melbourne, also stated that the PCR swab "does not compromise the blood brain barrier in any way."

Also Read: No, Vaccine Trials Did Not Cripple Children In Africa

"Routine nasopharyngeal swabs to test for other viruses or for other laboratory results have been collected safely for many years," he said in an email to AFP on July 10.

Hoaxes about possible contamination of COVID-19 tests, and those that raise doubts about their accuracy, were previously debunked by AFP here and here.

Claim Review :   COVID-19 PCR swab tests damage the blood-brain barrier and are harmful for humans.
Claimed By :  Posts on Facebook and Instagram
Fact Check :  False
COVID-19 COVID-19 Outbreak COVID-19 Pandemic Coronavirus Coronavirus Pandemic Coronavirus Outbreak COVID-19 PCR Swab Test PCR Swab Test COVID-19 Testing Coronavirus Testing Fake News Fact Check
If you value our work, we have an ask: Our journalists work with TruthSeekers like you to publish fact-checks, explainers, ground reports and media literacy content. Much of this work involves using investigative methods and forensic tools. Our work is resource-intensive, and we rely on our readers to fund our work. Support us so we can continue our work of decluttering the information landscape. BECOME A MEMBER
📧 Subscribe to our newsletter here. 📣You can also follow us on Twitter, Facebook, Instagram, Youtube, Linkedin and Google News