A claim popularized by discredited researcher Judy Mikovits in the viral "Plandemic" video — that influenza vaccines contain coronaviruses — has spread online. But experts say it is false, and coronaviruses are not among the ingredients approved for use in US flu vaccines.

"I agree entirely with Judy… if they use a tissue to make the influenza vaccine, and that tissue comes from a dog or from a monkey, they intrinsically have coronaviruses," Dublin professor Dolores Cahill says in a YouTube video posted in May 2020. 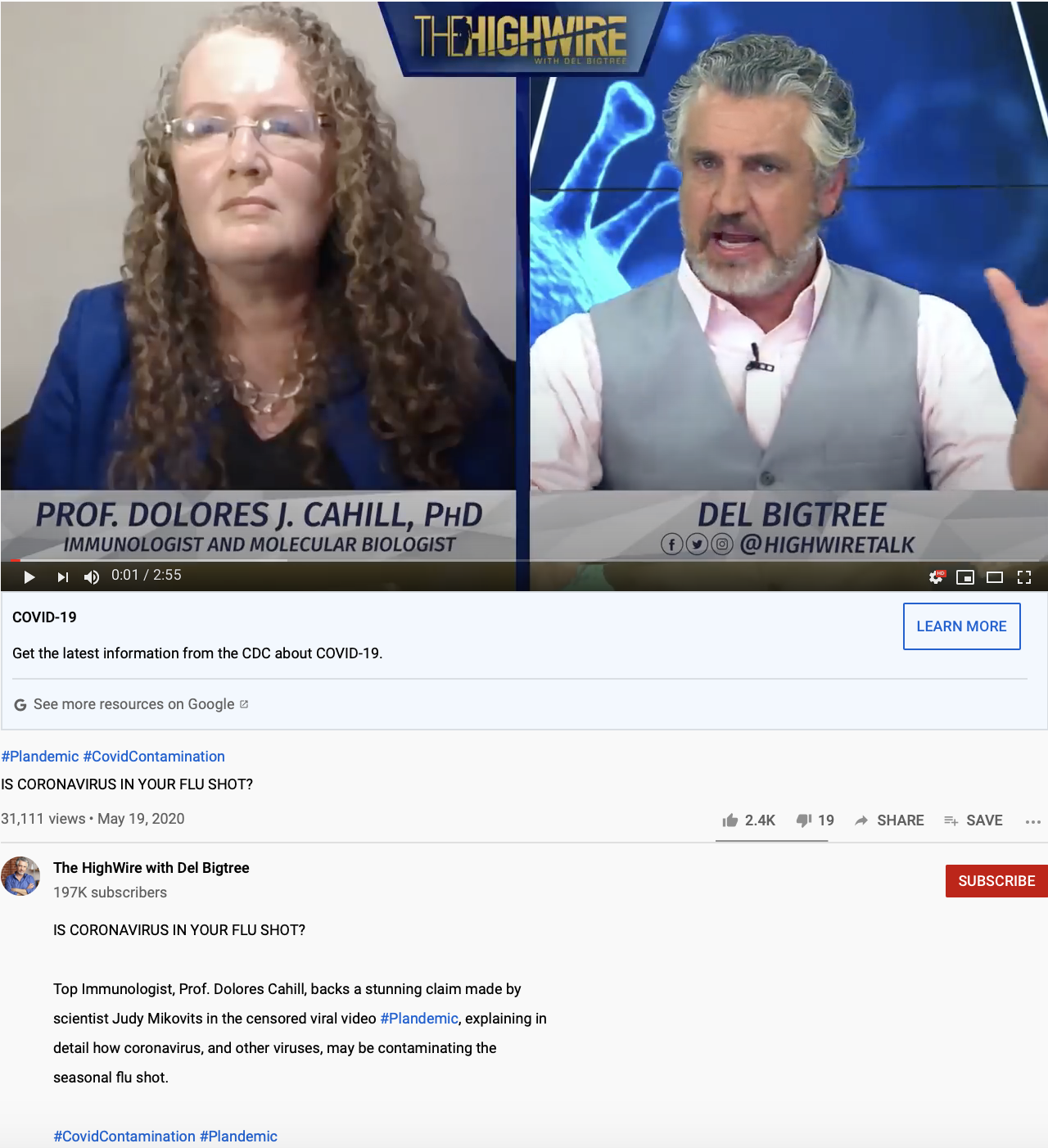 Cahill has been asked to resign from a leading European Union scientific committee over her online claims about the COVID-19 pandemic. A European Commission spokesperson told The Irish Times that Cahill's expressed views were "incompatible" with the scientific foundations of the committee.

The claim about coronaviruses in flu vaccines also appears on Facebook here.

Mikovits made the claim during a video interview that circulated widely online, and which contained a number of false or misleading claims about the novel coronavirus.

"Coronaviruses are in every animal, so if you've ever had a flu vaccine, you were injected with coronaviruses," she said in the video, titled "Plandemic."

Mikovits gained widespread attention in 2009 with a seemingly break-through study, but the paper was later retracted when the findings could not be replicated. Researchers theorized that the original findings were likely due to laboratory contamination.

Her fall from grace continued when she was briefly jailed on charges of theft from the laboratory that performed the ill-fated study.

There are seven known human coronaviruses, including SARS-CoV-2, the virus that causes COVID-19, which has killed more than 555,000 people worldwide.

But the claim that flu vaccines contain them is false.

While it is true that animals have coronaviruses, "it has no relationship to vaccines," Dr. Jacco Boon, an infectious disease professor at Washington University School of Medicine in St Louis, said in an email.

Coronavirus expert Dr. Julian Leibowitz of Texas A&M College of Medicine explained in an email: "Although coronaviruses do infect many species, they do generally not persist long term in the infected animal.

"The flu vaccine is commonly prepared from influenza virus grown in eggs laid by virus-free chickens, and these eggs are sterile prior to their being infected with influenza virus for vaccine preparation," he said.

If the claim was true, people vaccinated for the flu would likely "have some level of immunity to coronavirus infections, and they do not," Leibowitz added.

Coronaviruses are not listed as an ingredient in any of these resources.

Coronavirus COVID-19 Outbreak Coronavirus Outbreak Coronavirus Pandemic COVID-19 USA Coronaviruses Judy Mikovits Dr Judy Mikovits Coronavirus viral news viral Coronavirus video
If you value our work, we have an ask: Our journalists work with TruthSeekers like you to publish fact-checks, explainers, ground reports and media literacy content. Much of this work involves using investigative methods and forensic tools. Our work is resource-intensive, and we rely on our readers to fund our work. Support us so we can continue our work of decluttering the information landscape. BECOME A MEMBER
📧 Subscribe to our newsletter here. 📣You can also follow us on Twitter, Facebook, Instagram, Youtube, Linkedin and Google News