A post shared more than a thousand times on Facebook claims that a corpse of a COVID-19 positive person is 100 times more "toxic" 72 hours after death -- and that because undertakers are not burying bodies within this prescribed period, funerals have become hotspots for further infections. The claim is false; according to experts, corpses do not get more infectious over time and the rise in infections after funerals is a result of mourners infecting one another.

The Facebook post, shared more than 1,300 times in South Africa since July 21, 2020, reads in part: "After the 72 hours the toxicity of the body is 100 times more potent and everyone who comes close to even the sealed casket/coffin is in grave danger of contracting the virus (sic)." 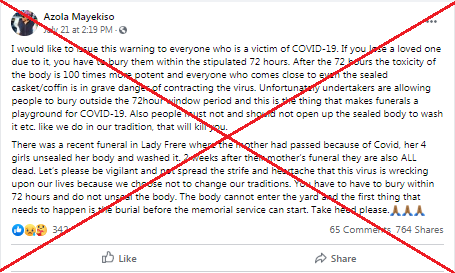 "Unfortunately undertakers are allowing people to bury outside the 72hour window period and this is the thing that makes funerals a playground for COVID-19 (sic)," it adds.

The claim has been repeated on Facebook here, here and here.

According to South Africa's recent Government Gazette published on July 17, 2020, bodies of dead people infected with COVID-19 can be kept in a mortuary for up to seven days. Previously the maximum holding period was two days.

"The latest regulations mandate that a COVID-19 positive body must not be kept at a mortuary for more than seven days before disposal (burial or cremation)," Gavin Kirk, a forensic pathology expert and senior lecturer at South Africa's University of Cape Town, told AFP Fact Check in an email.

"COVID-19 positive bodies are a potential source of infection after death. The period of infectivity is not certain and various reports have given infective periods from a few days to weeks," he said.

But Kirk said it is likely that the "degree of infectivity declines the longer the period is after death".

"The source of infection [from] COVID-19 positive bodies can be contaminated body surfaces or directly from the respiratory tract and organs."

"Handling and moving a body may cause some expulsion of material from the airways which can be a potential danger. Similarly, if the respiratory organs are manipulated during a post-mortem examination," Kirk said.

"Once the body has been sealed in a body bag following all the necessary protocols (as per the guidelines) and placed in the coffin or casket, there is no danger of infection – as long as all procedures have been properly carried out."

An undertaker puts the lid on a casket containing the remains of a COVID-19 patient at a funeral house in South Africa on July 21, 2020. (AFP / Michele Spatari)

The World Health Organization (WHO) agrees. A document on March 24, 2020, states that the safety procedures for a dead person infected with COVID-19 should be consistent with those used for any autopsies of people who have died from an acute respiratory illness.

"If a person died during the infectious period of COVID-19, the lungs and other organs may still contain live virus, and additional respiratory protection is needed during aerosol-generating procedures," it reads.

It specifies that family or friends may view the body but should not "touch or kiss the body" and adds that those who will handle the burial of the body should wear gloves and wash their hands with soap and water after the burial is completed.

Asked if a COVID-19 infected body needs to be buried within a certain time because of its "toxicity", Shabir Madhi, professor of vaccinology at South Africa's University of Witwatersrand, said it was not the case.

"In fact, the virus will have died after three days," he wrote in an email to AFP.

The Facebook post claims that after 72 hours, corpses are highly infectious -- and increasingly so -- even in a sealed coffin, which Madhi dismissed as "absolute nonsense".

Also Read: No, The Global COVID-19 Death Toll Has Not Crossed 1.6 Million

Risk of infection at funerals

Madhi said infections at funerals have little to do with the corpse but rather with the living.

"[It's] because of the living people's behaviour and nothing to do with the corpse. The virus is not a living creature and cannot transmit unless living people spread it," he said.

Cheryl Cohen, associate professor in epidemiology at the University of Witwatersrand and co-head of the Centre for Respiratory Disease and Meningitis at the National Institute for Communicable Disease (NICD), echoed Madhi's comments that transmission at funerals is because of the mourners.

"This is a respiratory virus spread by droplets -- generally, as long as people don't have very close contact with the corpse, like touching, kissing or hugging, there should not be a risk from the corpse," she said. 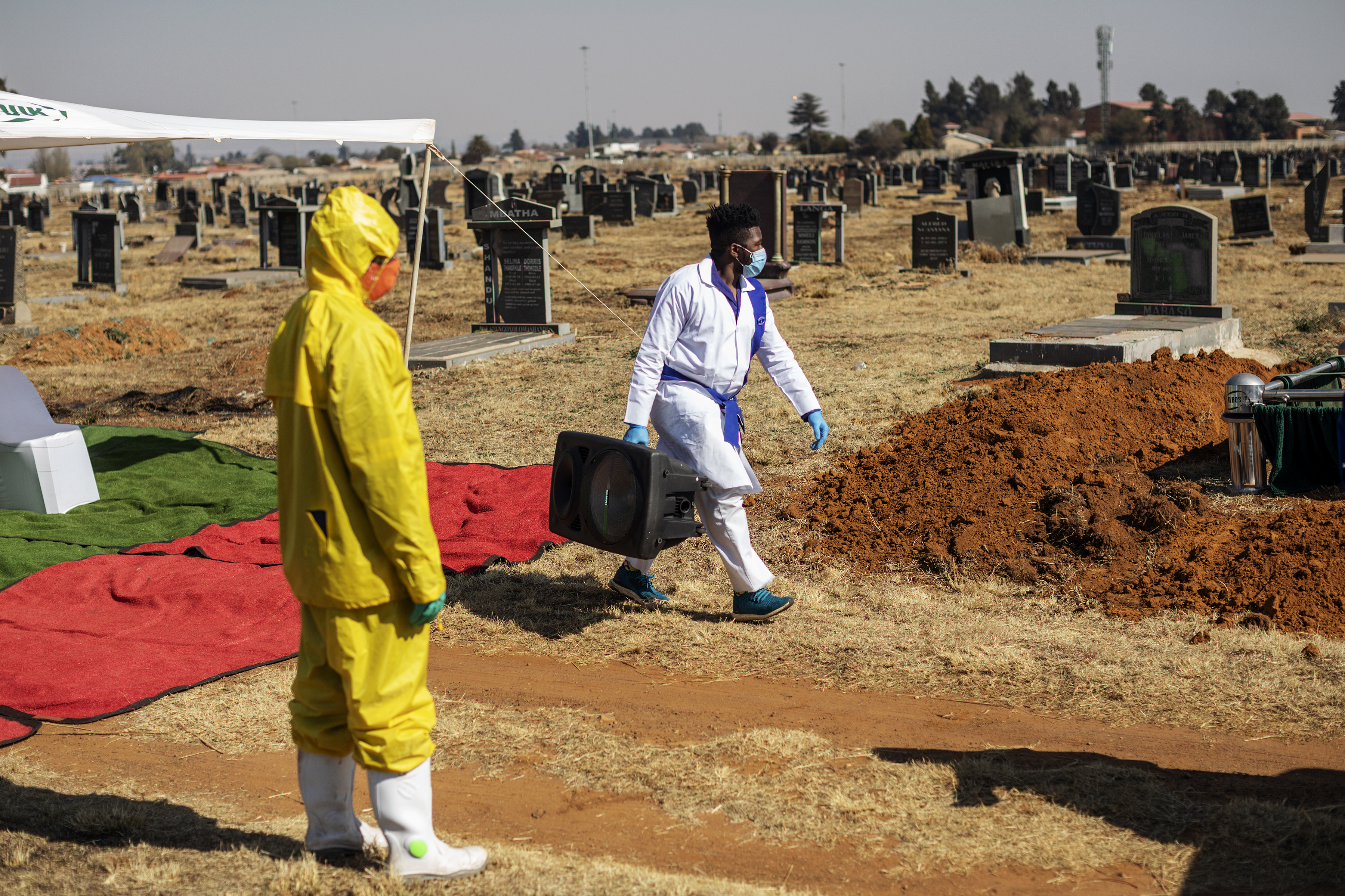 A man carries a speaker next to an undertaker wearing personal protective equipment (PPE) during the funeral of a COVID-19 coronavirus patient in Soweto, South Africa, on July 21, 2020. (AFP / Michele Spatari)

Attendance at a funeral is limited to 50 people in South Africa, according to pandemic regulations, and a permit must be obtained from a magistrate or police station. Furthermore, wearing masks, sanitising hands and social distancing are mandatory.

Funerals have become a contentious issue in the country with flouted regulations under the microscope by social media users, as reported in this AFP Fact Check on the funeral of Zindzi Mandela, the youngest daughter of South Africa's Nelson Mandela.