President Donald Trump used Twitter to spread footage of a doctor who claims a combination of medicines including hydroxychloroquine will cure COVID-19. But there is currently no cure for the disease caused by the novel coronavirus, and the false information the video contains has left social media companies scrambling to remove it.

The video retweeted by Trump -- who said he used hydroxychloroquine and has repeatedly touted it -- is from a July 27, 2020 press conference held by a group calling themselves "America's Frontline Doctors" who stood wearing white lab coats but without social distancing or any form of facial covering in front of the US Supreme Court.

A screenshot taken on July 28, 2020 shows an archived version of a tweet by US President Donald Trump

The tweet is the latest example of Trump making or promoting questionable claims about the coronavirus, which has left more than 148,000 people dead in the United States, and comes just days after the president struck a more sober tone on the pandemic.

The roughly 40-minute press conference -- which addressed various topics related to the coronavirus -- repeatedly cited the alleged benefits of hydroxychloroquine, an anti-malarial drug that the World Health Organization (WHO) said in June could be ruled out as a treatment for hospitalized COVID-19 patients.

The "America's Frontline Doctors" website, which is now offline, said "American life has fallen casualty to a massive disinformation campaign" and warned that "if Americans continue to let so-called experts and media personalities make their decisions, the great American experiment of a Constitutional Republic with Representative Democracy, will cease." 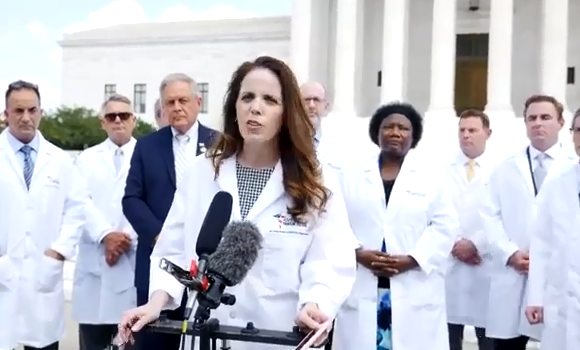 A screenshot taken on July 28, 2020 shows the press conference in front of the US Supreme Court

Social media companies are working to remove footage of the press conference from their platforms, with Twitter saying that "tweets with the video are in violation of our COVID-19 misinformation policy," and Facebook saying it includes "false information about cures and treatments for COVID-19."

But the footage is still circulating online, mirroring the situation with "Plandemic," another video that peddled falsehoods about COVID-19, which AFP fact checked here.

Dr. Stella Immanuel, who can be seen in the preview of the since-removed video retweeted by Trump, said during the press conference that she had treated more than 350 patients diagnosed with COVID-19. 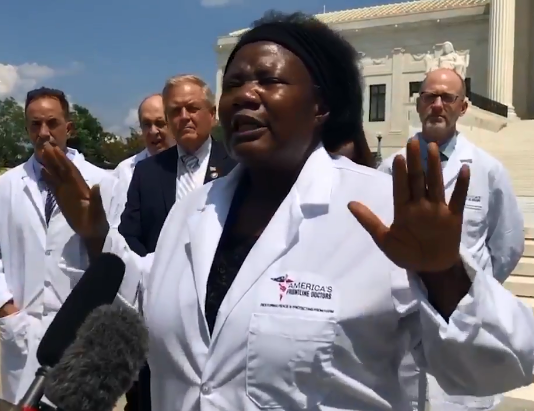 A screenshot taken on July 28, 2020 shows Dr. Stella Immanuel speaking in front of the US Supreme Court

"I came here to Washington, DC to tell America: Nobody needs to get sick. This virus has a cure. It is called hydroxychloroquine, zinc and Zithromax," she said.

Asked about Immanuel's remarks, Dr. Julian Leibowitz, an expert in coronaviruses who is a professor of microbial pathogenesis and immunology at Texas A&M's College of Medicine, told AFP by email that "multiple studies have shown this to be wrong."

And Dr. Benjamin Neuman, an expert in coronaviruses who chairs the Biological Sciences department at Texas A&M University-Texarkana, said via email that "Hydroxychloroquine and Azithromycin have, separately and together, done well in a few small studies that generated a lot of hope."

But "both clearly and reproducibly failed to work beyond a reasonable doubt in larger studies" needed to determine if they were in fact effective, he said.

Immanuel however declared that "any study that says hydroxychloroquine doesn't work is fake science," and dismissed those calling for more extensive research on the subject as "fake doctors."

She also said that, "You don't need (a) mask. There is a cure" -- contradicting advice from the US Centers for Disease Control and Prevention on the use of cloth face coverings to slow the spread of the coronavirus.

Also Read: WHO Has Not Said Cats And Dogs Cannot Contract COVID-19

And in June, the US Food and Drug Administration revoked the Emergency Use Authorization (EUA) allowing hydroxychloroquine and chloroquine from the Strategic National Stockpile to be used to treat hospitalized COVID-19 patients.

The "FDA determined that chloroquine and hydroxychloroquine are unlikely to be effective in treating COVID-19 for the authorized uses in the EUA," it said.

Despite this, another doctor at the press conference, ophthalmologist Richard Urso, said that "this drug is super safe -- it's safer than aspirin, MOTRIN, Tylenol," and that the issue in studies that found otherwise was that they used too high a dose.

Although speakers largely focused on medical issues, the event -- which was attended by Representative Ralph Norman, a Republican congressman from South Carolina -- also had a political message.

One speaker, Jenny Beth Martin of Tea Party Patriots, urged Americans to contact their elected representatives and "tell them that you want to know why you're not able to get access to a drug that doctors are telling you will help end this and help us reduce the number of hospitalizations and reduce the number of deaths."

AFP Fact Check has debunked more than 570 examples of false or misleading information about the novel coronavirus crisis. A complete list of our fact checks on the topic in English can be found here.

Claim :   Hydroxychloroquine can cure COVID-19.
Claimed By :  Dr Stella Immanuel, Donald Trump, America’s Frontline Doctors
Fact Check :  False
Donald Trump hydroxychloroquine HCQ Dr. Stella Immanuel America’s Frontline Doctors US Centers for Disease Control and Prevention CDC US FDA WHO World Health Organisation COVID-19 COVID-19 Vaccine COVID-19 Cure Coronavirus Cure Coronavirus Vaccine COVID-19 Outbreak COVID-19 Pandemic Coronavirus Coronavirus Pandemic Coronavirus Outbreak Face Masks Face Mask Mask Masks
If you value our work, we have an ask: Our journalists work with TruthSeekers like you to publish fact-checks, explainers, ground reports and media literacy content. Much of this work involves using investigative methods and forensic tools. Our work is resource-intensive, and we rely on our readers to fund our work. Support us so we can continue our work of decluttering the information landscape. BECOME A MEMBER
📧 Subscribe to our newsletter here. 📣You can also follow us on Twitter, Facebook, Instagram, Youtube, Linkedin and Google News