A video has been viewed hundreds of times in multiple social media posts alongside a claim it shows Chinese Muslims performing a communal Friday prayer in a mosque despite the novel coronavirus pandemic. The claim is false; the video has circulated in reports about Muslims performing a mass prayer at a mosque in the western Chinese city of Xining in 2011, nine years before the novel coronavirus outbreak.

This video has been viewed more than 300 times after it was published on YouTube on February 15, 2020. 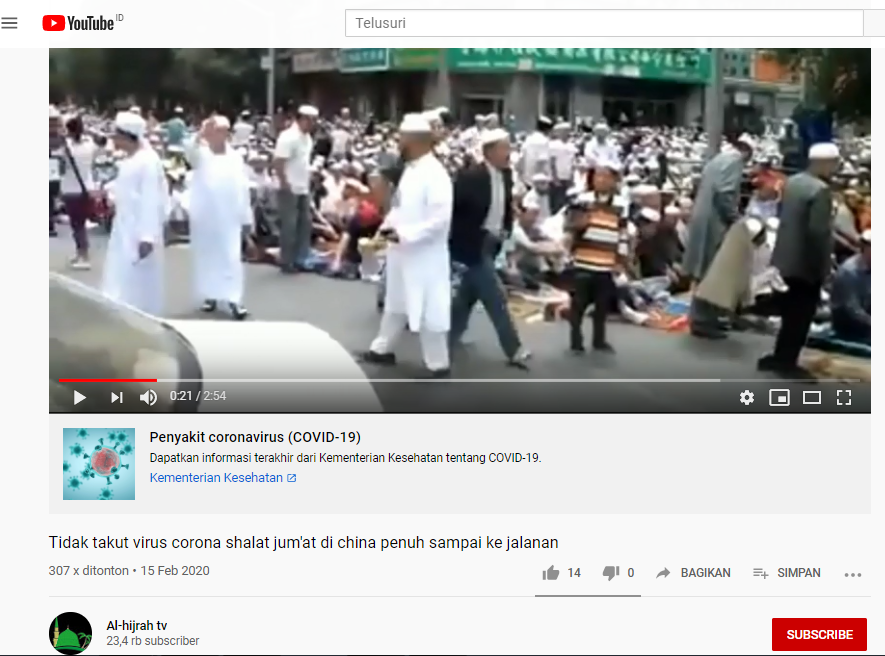 The video's Indonesian-language title translates to English as: "No fear of the coronavirus Friday prayers in China are packed with participants who spill out to the streets."

The video's caption reads: "The current situation in China. Friday prayers are packed with people who spill out to the streets."

ALSO READ: A US Patent On The Novel Coronavirus? Conspiracy Theories Brew Online

Authorities in Jakarta, the epicentre of the outbreak in Indonesia, have decided to limit mass gatherings, including suspending mass prayers at mosques for two weeks, according to this press release issued by the Jakarta governor's office.

The clip was also shared with a Bengali-language caption here and here with a claim that it shows recent Muslim converts flocking to a mosque in China due to the novel coronavirus pandemic.

The claims are false; the video has circulated online since at least 2011 in reports about Muslims praying in a mosque in the western Chinese city of Xining.

A reverse image search using a keyframe of the clip generated from InVID-WeVerify, a video verification tool, found this video published on YouTube on August 12, 2011, by YouTube user Pavel Rytir.

The video's title reads: "Ramadan in Xining". The caption reads: "Peace and Love, Sallem all Laikhum".

Ramadan is the holy fasting month of Muslims. In 2011, it began on August 1 and ended on August 29.

Xining is the capital of Qinghai province, in the western part of China.

Below is a screenshot comparison between the video in the misleading posts (L) and the 2011 YouTube video (R):

AFP found the video was filmed in front of Dongguan Mosque in Xining. This photo taken in front of the mosque shows a crowd of people praying next to a building that has the same features.

Below is a screenshot comparison between the video in the misleading posts (L) and the photo taken in front of Dongguan Mosque (R). AFP has highlighted similar features in red.

Claim :   Video shows Chinese Muslims performing a communal Friday prayer in a mosque despite the novel Coronavirus pandemic.
Claimed By :  YouTube videos, Social Media users
Fact Check :  False
China Coronavirus Coronavirus fake news Coronavirus viral video infodemic Social Distancing Friday prayers China Mosque Chinese muslims FAKE NEWS Viral video Video FactCheck
If you value our work, we have an ask: Our journalists work with TruthSeekers like you to publish fact-checks, explainers, ground reports and media literacy content. Much of this work involves using investigative methods and forensic tools. Our work is resource-intensive, and we rely on our readers to fund our work. Support us so we can continue our work of decluttering the information landscape. BECOME A MEMBER
📧 Subscribe to our newsletter here. 📣You can also follow us on Twitter, Facebook, Instagram, Youtube, Linkedin and Google News