A video of food packets deposited on a street has been viewed millions of times on Facebook, Twitter and YouTube alongside a claim it shows food donations for people in Turkey during a novel coronavirus lockdown. The claim is false; the video shows donations for victims of a deadly earthquake that struck eastern Turkey in January 2020, almost two months before Turkey recorded its first case of the novel coronavirus, which causes the disease COVID-19.

This 22-second video has been viewed nearly three million times since it was posted to Twitter on March 23, 2020.

The post's caption reads: "In #Turkey, people have started to leave food packets on the road for the poor and the needy who cannot earn due to #COVIDー19 lockdown. Love you #Turks for representing us." 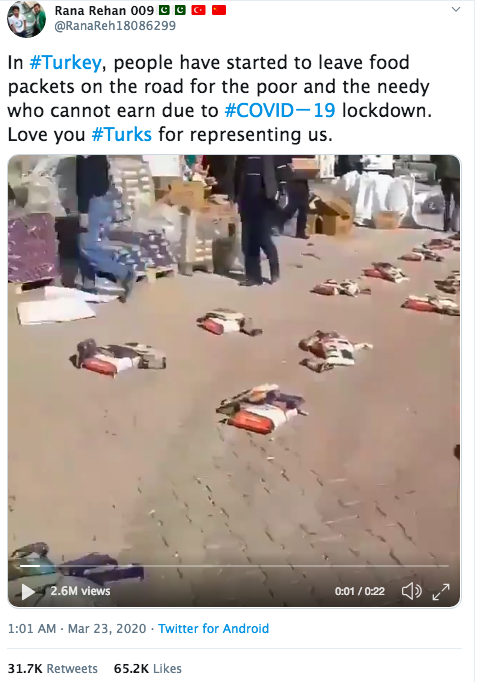 On March 18, 2020, Turkish President Recep Tayyip Erdogan urged residents to remain at home if possible, but no mandatory lockdown was announced. Erdogan announced further travel restrictions on March 27 as the number of COVID-19 cases in Turkey topped 5,600.

A combination of keyword and reverse image searches found the footage in fact shows donations for victims of a deadly earthquake that hit the Turkish city of Elazig in January 2020.

ALSO READ: Were Ventilators For COVID-19 Stuck In A Warehouse In New York?

Footage showing similar packets on the same street was broadcast live on Facebook here on January 25, 2020, weeks before Turkey confirmed its first COVID-19 case on March 11, 2020.

The Facebook user, who geotagged the video to a Turkish volunteer organisation, also uploaded several photos on January 26 in this post about donations the group had collected for the "earthquake area".

AFP reported on the earthquake in Elazig here on January 26.

"Hopes faded Sunday of finding more survivors from a powerful earthquake in eastern Turkey as more bodies were pulled from the rubble and the death toll climbed to 35. Nearly 4,000 rescue workers combed through debris in freezing temperatures, helped by mechanical diggers, in vain hopes of finding anyone alive in the city of Elazig," AFP reported.