A WhatsApp voice message circulating in Nigeria claims that anti-malaria drug chloroquine phosphate is a cure for COVID-19. This is misleading: while a study found the molecule showed "apparent efficacy" in treating the disease, trials are still ongoing. Experts also warned against taking the drug without prescription. British officials have opened a probe into an illegal website selling the drug, following AFP's investigation.

In the two-minute WhatsApp voice note, a man, speaking English in a Nigerian accent, summarises what he says he learned from watching a French video.

He claims French and Chinese doctors "came out with a solution to coronavirus, and this solution is just our chloroquine — the normal chloroquine that we normally use in Africa to cure malaria and fever".

He says the doctors recommend taking 500 mg of chloroquine phosphate for eight days.

The WhatsApp message features a picture of a box of chloroquine phosphate tablets. 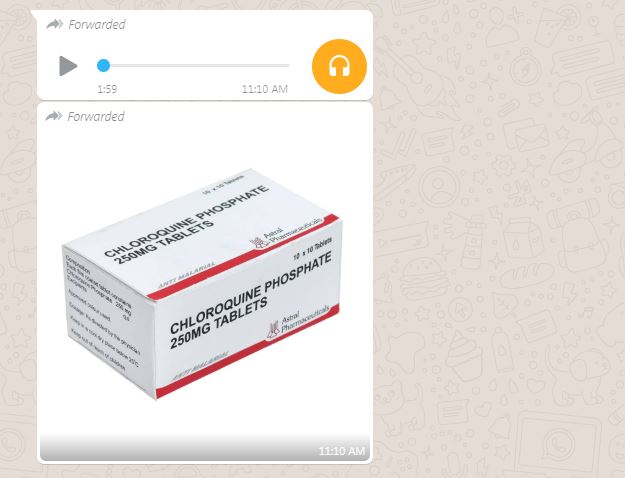 He urges people to "rush to any pharmacy and get chloroquine because nobody knows when anybody can get contaminated with coronavirus".

He adds that the "treatment should be eight days; you take 500 milligrams of chloroquine for eight days and then you would be completely cured of any infection of coronavirus".

Anti-malaria drug chloroquine has been banned in Nigeria since 2005 after a WHO recommendation warned of high treatment failures and drug resistance in some parts of the world. It is still being used in South Africa but is not recommended as primary treatment for malaria due to high resistance.

Chinese state news agency Xinhua reported on February 17 that "Chinese experts, based on the result of clinical trials, have confirmed that chloroquine phosphate... has a certain curative effect on the novel coronavirus disease".

These trials were being conducted on "over 100 patients", according to Sun Yanrong, deputy head of the China National Center for Biotechnology Development under the Ministry of Science and Technology.

A brief overview of the findings published by the Japan-based journal BioScience Trends provided few details as to how the trials were carried out.

In a press conference on February 20, Janet Diaz, head of clinical care within the WHO Emergencies Programme, said that "for chloroquine, there is no proof that that is an effective treatment at this time."

At the time of writing, the World Health Organization (WHO) states that "to date, there is no vaccine and no specific antiviral medicine to prevent or treat COVID-2019".

Doctors in Lagos told AFP the Whatsapp message's chloroquine usage recommendation was significantly more than was typically prescribed for malaria treatment before the drug was banned in Nigeria.

Goke Akinrogunde, clinical director at GTAK Health Clinic in Lagos, said that "500 mg for eight days is an overdose for malaria treatment". He said treatment would only last up to three days when the drug was in use in Nigeria.

Ajibola Anjorin, a public health doctor who works on the WHO-backed Saving One Million Lives initiative in northern Nigeria, said that before chloroquine was banned, "the usual dose for adults was two 200 mg tablets twice a day for five doses" in adults.

The WHO lists the potential adverse effects of chloroquine here.

Website set up for chloroquine sale in the UK

AFP ran a reverse image search of the picture sent in the WhatsApp message, which led to the discovery of a website, coronavirusmedication.co.uk. The site sells packs of 14 tablets of chloroquine phosphate (500 mg) for £79.99 (92 euros). 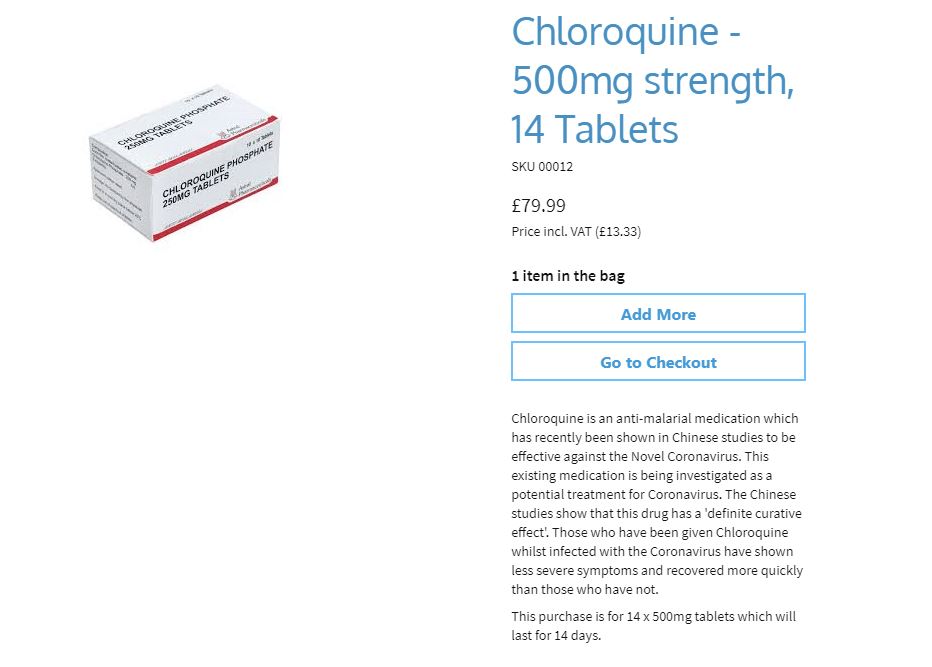 A screenshot taken on March 5, 2020, showing a website selling chloroquine as treatment for coronavirus

It bills itself as belonging to an organisation called "Viral Medications UK".

However, AFP found no other online clues of any organisation by that name.

We traced the website's history using site identity tool Whois.com and found that it was registered on February 28, 2020 — about the same time the WhatsApp broadcast began spreading in Nigeria.

No name or contact address was used in the domain name purchase. 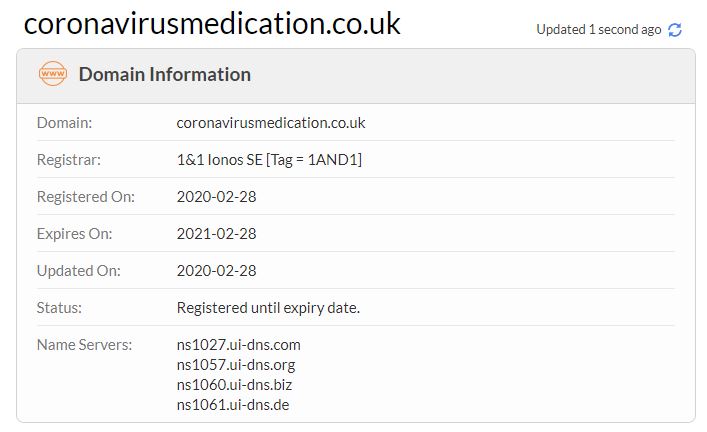 A screenshot taken on March 5, 2020, showing information about the website registration

AFP contacted the UK's Medicines and Healthcare products Regulatory Agency (MHRA) to find out whether this new site could legally sell chloroquine online and market it as a coronavirus treatment.

"Patient safety is our highest priority and we will investigate and take action against those who act with no regard to public health," MHRA told AFP in a written statement.

"Our message is clear: the illegal supply of medicines is a criminal offence. Websites offering to supply prescription medicines without a prescription are not only breaking the law but are putting the health of patients at risk."

The agency said it had a history of dealing with similar websites: "Over the past decade we have shut down more than 26,000 websites involved in the illegal sale of medicines".