A claim that police in Thailand can issue fines to anyone who does not wear a face mask in public during the novel coronavirus pandemic has been shared repeatedly on Facebook, Twitter and Line Messenger. The claim is false; Thai legal experts told AFP there is no law in the country that allows police to fine people for not wearing face masks; Thai police issued several statements calling the claims "fake news".

Below is a screenshot of the Line message:

Screenshot of the Line message

The Thai-language message translates to English as: "When you go outside, don't forget to wear a mask. Otherwise if you see the [police] checking point, you will be fine for 200 THB".

ALSO READ: No, China Did Not Send Doctors To Malaysia To Combat COVID-19

200 Thai Baht is the equivalent of 6 US dollars.

A similar claim was made by Thai Facebook users here and here, and also on Twitter here.

There is currently no law in Thailand that enables police to fine the public for not wearing face masks during a pandemic. During a phone conversation with AFP on March 31, 2020, Thai lawyer and human rights activist Ronnarong Kaewphet said: "No, there is no provision in the Thai legislation which mentions anything like this."

ALSO READ: Is The Hantavirus A 'New' Disease Emerging From China? A FactCheck.

"It is indeed fake, and we have arrested a number of people who started spreading this kind of news," he said.

AFP also found this statement on the Facebook page of Police Radio Thailand, the Public Affair Division of the Royal Thai Police, published on March 26, 2020. 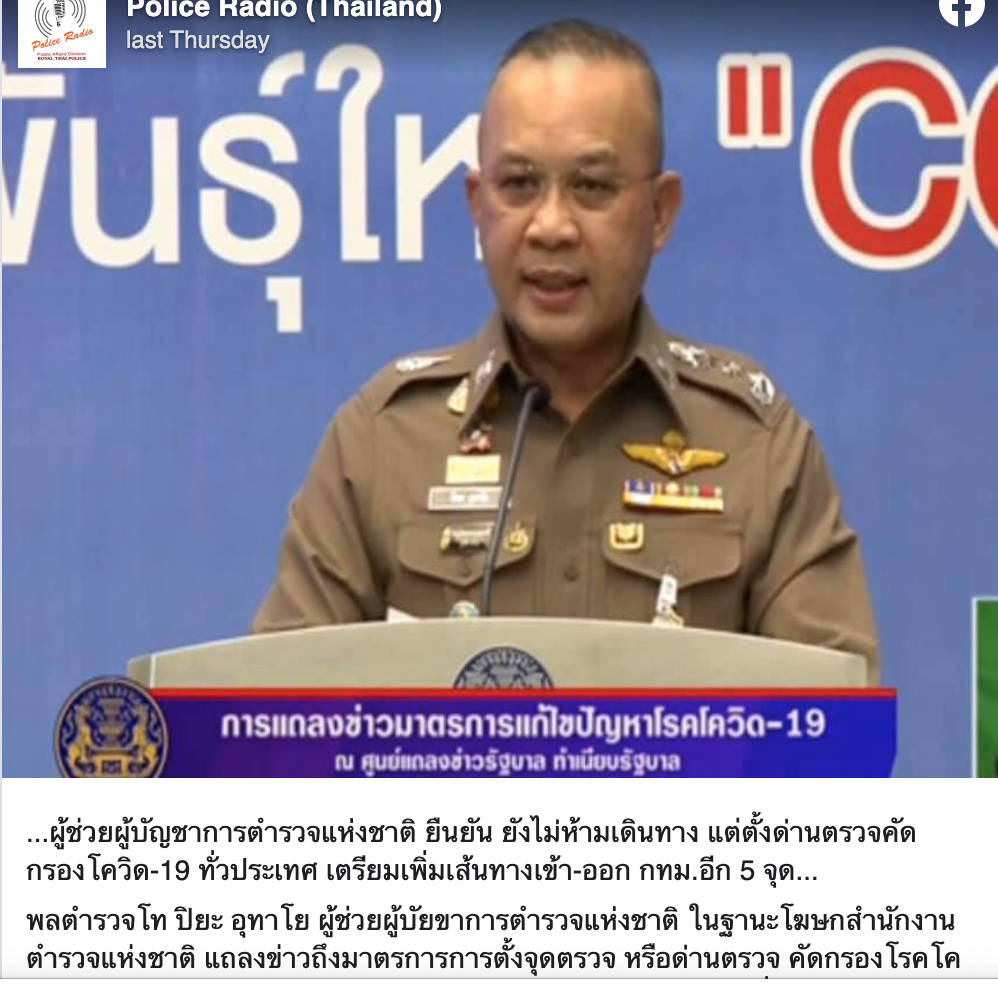 It reads, in part: "The spokesman of the Royal Thai Police also denied that police charged a fine of 200 baht if (people) do not wear a mask, as per the news on social media, by confirming as fake news"

Thailand's Anti-Fake News Centre, a government-run platform within the Ministry of Digital Economy and Society, also published this report on March 26, 2020, labeling the claims in the misleading post as "fake news".

Below is a screenshot of the Anti-Fake News Centre's article:

ALSO READ: Did Italians Throw Their Money On The Streets Due To COVID-19 Deaths?

The Thai headline translates to English as: "Fake news, don't share! People who walk pass police checking point, not wearing a mask will be fined for 200 Baht".

Claim :   Police in Thailand can issue fines to anyone who does not wear a face mask in public during the novel Coronavirus pandemic.
Claimed By :  Social Media users
Fact Check :  False
Thailand Coronavirus Thailand Anti-Fake News Centre Fake news face masks Coronavirus Coronavirus viral post Coronavirus rumours Coronavirus fake news Coronavirus pandemic infodemic FactCheck Thai Baht Police fine
If you value our work, we have an ask: Our journalists work with TruthSeekers like you to publish fact-checks, explainers, ground reports and media literacy content. Much of this work involves using investigative methods and forensic tools. Our work is resource-intensive, and we rely on our readers to fund our work. Support us so we can continue our work of decluttering the information landscape. BECOME A MEMBER
📧 Subscribe to our newsletter here. 📣You can also follow us on Twitter, Facebook, Instagram, Youtube, Linkedin and Google News