A photo of a group of people holding a banner that bears the Chinese and Malaysian flags has been shared thousands of times on Facebook and Twitter alongside a claim it shows Chinese doctors arriving in Malaysia to combat the novel coronavirus, COVID-19. The claim is misleading; the photo actually shows medical supplies donated by China that were delivered to a hospital in Malaysia.

Its Chinese caption translates to English as: "Finally here. Team of Chinese doctors flew to Malaysia to help fight the epidemic, which moves the world. Thanks China".

The text banner in the photo, which is written in a mix of Malay and Chinese, reads in English: "Climb the hill together, go down the valley together / Fight COVID-19 with cooperation and unity / Together we will climb the mountains Together we will cross the valleys / 19th March 2020 / The Embassy of the People's Republic of China in Malaysia". 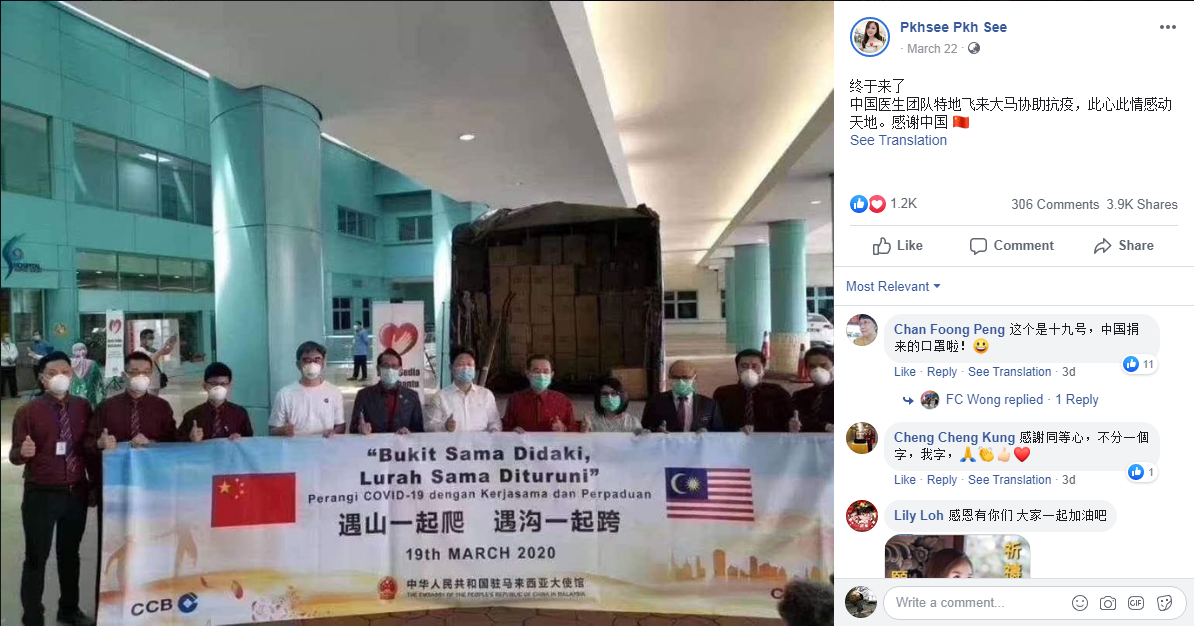 COVID-19 claimed more than 36,000 lives and infected nearly 754,000 people worldwide since it was first detected in the Chinese city of Wuhan in late 2019, the World Health Organization (WHO) reported on March 31, 2020. Malaysia reported more than 2,700 confirmed cases and 43 deaths, according to the nation's Health Ministry on March 31, 2020.

The same photo has been shared more than 4,300 times after it was also published alongside a similar claim on Facebook here, here and here; and Twitter here.

A reverse Google image search found the photo in fact shows China's ambassador to Malaysia, Bai Tian, and top Malaysian health officials presiding over the donation of Chinese medical supplies to a hospital in Selangor, a state in peninsular Malaysia.

The photo was published on the China Embassy in Malaysia's official Facebook page here on March 19, 2020. The post is titled "Chinese Embassy Donated Its First Batch of Medical Materials to Malaysia."

ALSO READ: Is The Hantavirus A 'New' Disease Emerging From China? A FactCheck.

China's donation included "5,000 face masks and 10,000 surgical face shields", according to the embassy's post. Another 3,500 COVID-19 test kits were also en route from China. The embassy made no mention of Chinese doctors being sent to Malaysia.

The photo was also published here on March 19, 2020, by Nanyang Siang Pau, a Malaysia-based Chinese-language newspaper. The article reports that the photo shows "China's first batch of medical materials" arriving at a Malaysian hospital.