A WhatsApp message circulating in South Sudan claims the chief justice's son is critically ill with COVID-19. However, the health ministry said the senior official and his family tested negative for the disease, and his daughter told AFP he doesn't have a son going by the name quoted in social media posts.

The message claims that the son of South Sudan's Chief Justice Chan Reec Madut is in a critical condition with COVID-19 at the Juba Teaching Hospital in the nation's capital. According to the claim, 32-year-old Kuel Reec Madut flew to South Sudan from London last month and refused to get tested at the Juba International Airport upon his arrival. The post reads:

South Sudan is due to announce the second case of #COVID19, as son to Chief Justice, is in critical condition!!

Brother Kuel Reech Madut, has developed symptoms relating to the entire COVID19 pandemic. According to the family members, Madam Mary Athuoi Madut says, our brother has been in critical condition since his arrival from the UK last month but today developed symptoms like cough, fever, shortness of breath (sic)." 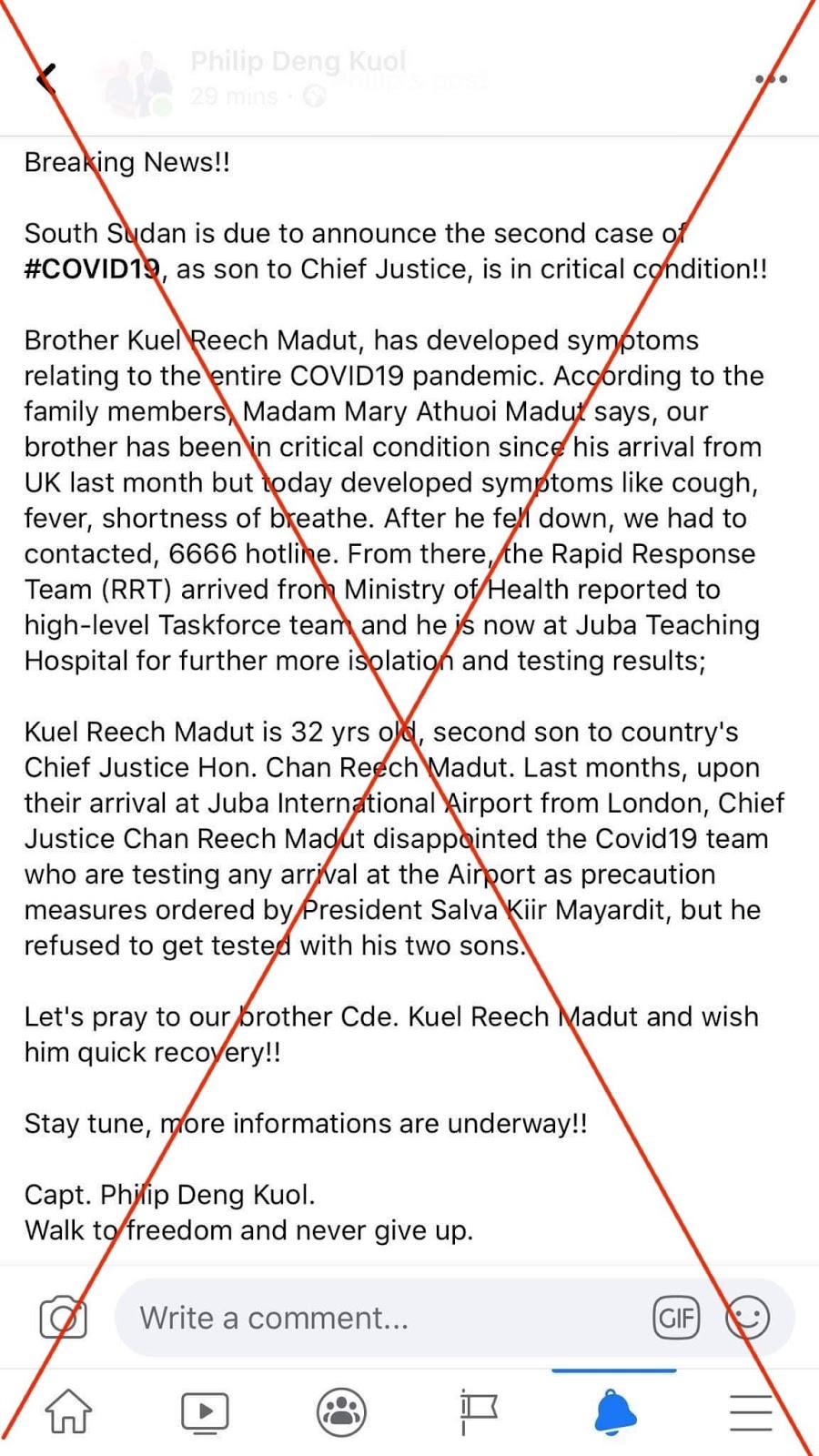 No son by that name

South Sudan's health ministry refuted the claims, stating that 14 family members of the chief justice including his children tested negative for COVID-19.

Contacted by AFP, the health ministry's COVID-19 incident manager Angok Gordon said: "There are only four confirmed cases in South Sudan and none of them is from the chief justice's family".

He explained that all the chief justice's family members had been tested, quarantined and rescreened, and have not shown any symptoms of the disease.

He said the ministry announces confirmed cases to the public through official statements to the media and on their website. He urged the public not to rely on information circulating on social media.

The chief justice's daughter Achok Chan shared with AFP photos of the test certificates that were given to her family by the health ministry after completion of the 14-day quarantine period. 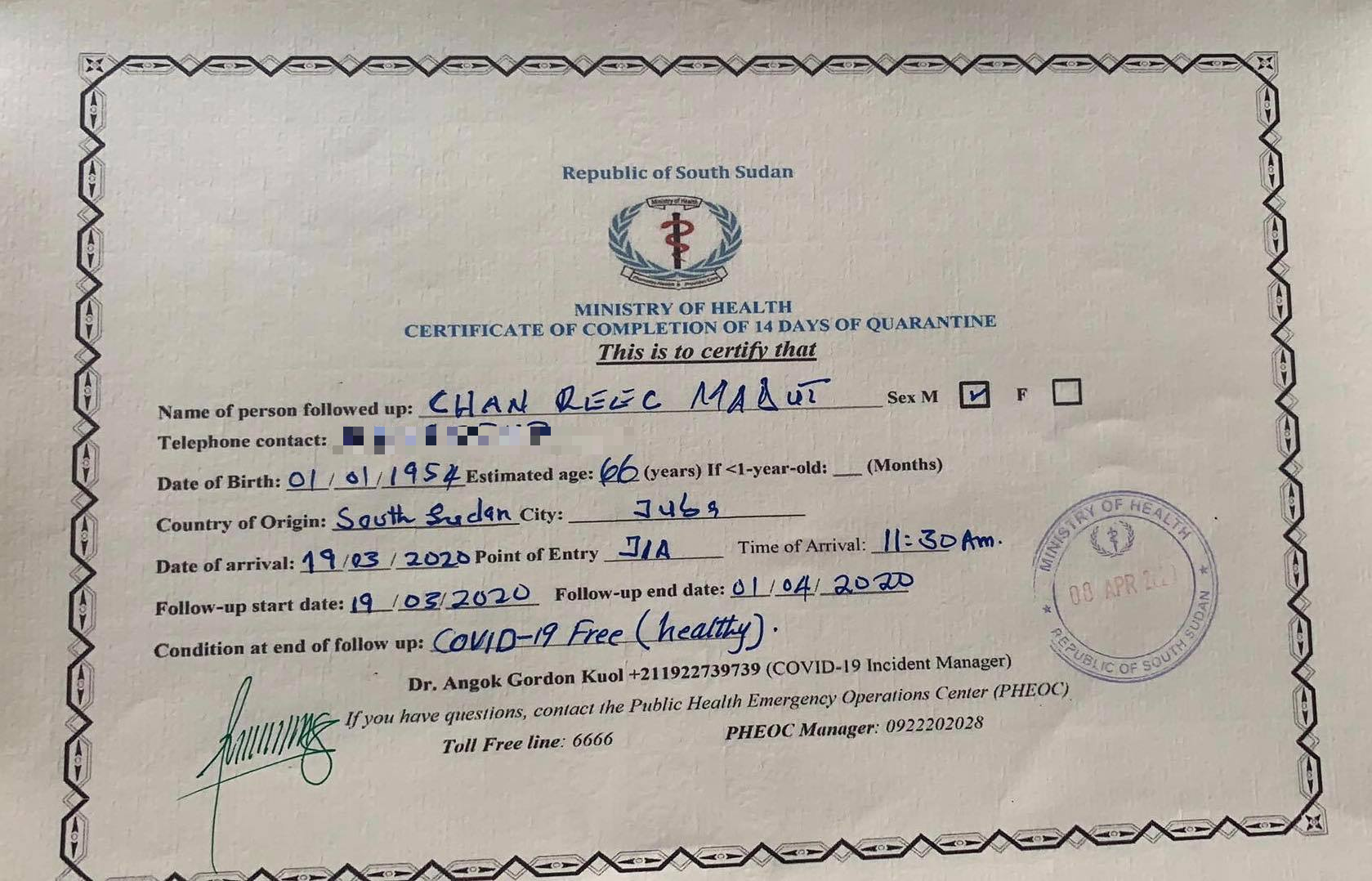 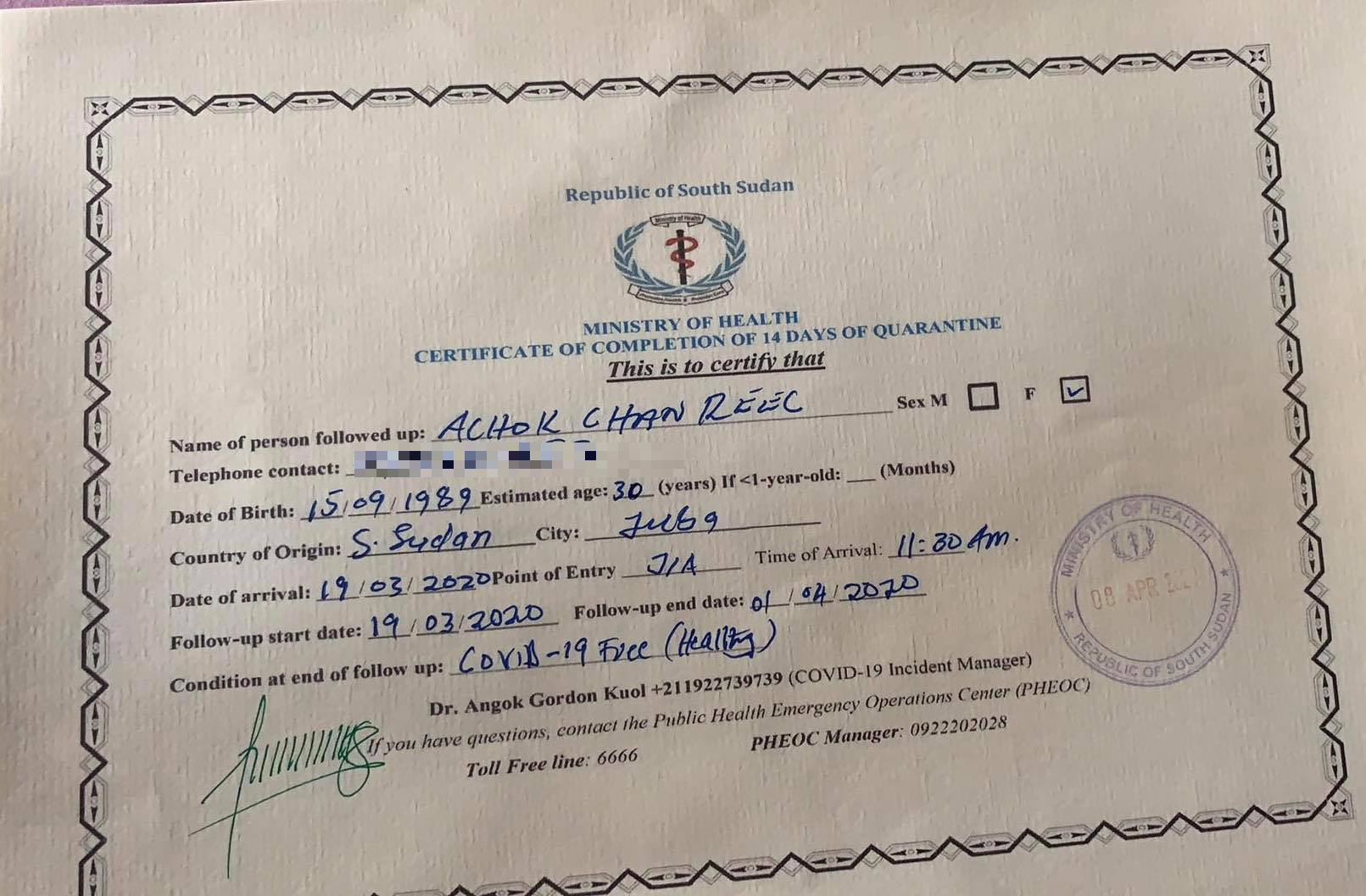 Furthermore, she told AFP in a phone interview that she did not have a brother called Kuel Reec, as mentioned in the posts.

She also denied reports that the family refused to be tested at Juba International Airport upon their arrival from a recent trip to Dubai.

"We have not refused to be tested," she said. "The four of us, my parents and brother, were tested at the airport together with the rest of the passengers, and we were quarantined for 14 days afterward to ensure that we are COVID-19 negative".

She said that they were all allowed to resume their normal duties after the quarantine period as none of them has shown any symptoms of the disease.

On April 7, 2020, the High-Level Task Force on Coronavirus in South Sudan confirmed the second case of COVID-19, a 53-year-old Kenyan, UN employee who traveled to Juba from Nairobi in March.

Claim :   Son of the Chief Justice of South Sudan is critically ill with COVID-19, after the family returned from the UK and refused to be tested.
Claimed By :  Social Media, WhatsApp users in South Sudan
Fact Check :  False
South Sudan Coronavirus Africa Coronavirus Coronavirus viral post Coronavirus rumours Coronavirus fake news infodemic testing Coronavirus Task Force Coronavirus South Sudan Chan Reec Madut South Sudan Chief Justice FactCheck WhatsApp viral message
If you value our work, we have an ask: Our journalists work with TruthSeekers like you to publish fact-checks, explainers, ground reports and media literacy content. Much of this work involves using investigative methods and forensic tools. Our work is resource-intensive, and we rely on our readers to fund our work. Support us so we can continue our work of decluttering the information landscape. BECOME A MEMBER
📧 Subscribe to our newsletter here. 📣You can also follow us on Twitter, Facebook, Instagram, Youtube, Linkedin and Google News