A video has been viewed millions of times and shared tens of thousands of times on Facebook alongside a claim it shows a Pakistan Air Force pilot flying a JF-17 fighter plane under a bridge. The claim is false; the video is computer-generated imagery from a video game.

The Urdu-language text superimposed on the video translates to English as: "Oh Eagle, the world is jealous of your flight."

Eagle is a popular reference to Pakistan Air Force pilots.

The post's caption translates as: "India cannot win no matter from where it buys the planes because they don't have sentiments of faith, jihad, martyrdom. When our men raise the slogan of Allah-u-Akbar [God is the greatest], then they shake the world.

"Wars cannot be won by mere planes. The pilots should be like those in the Pakistan Air Force, then this is possible. Pakistanis know how to defend their land and they know how to give a befitting response to the enemy. This was the JF-17 that had startled the entire world by flying upside down for 133 kilometers." 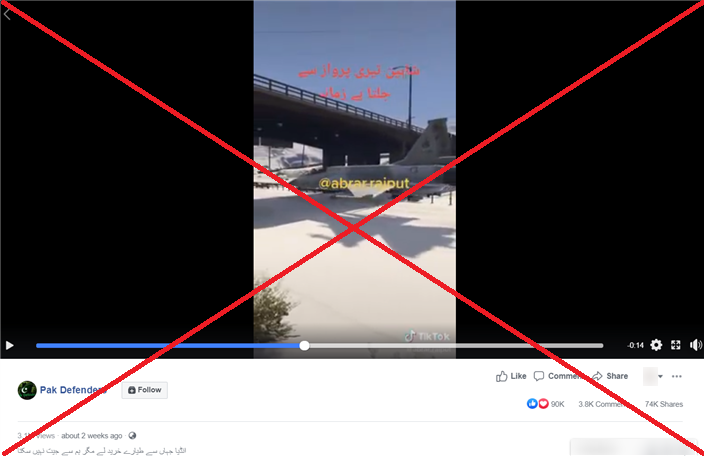 The same video was also shared alongside a similar claim on Facebook, here and here.

Also Read: Do Gas Cylinders Explode After Passing Their "Expiry Dates"? Not Really

A reverse image search on Google followed by a keyword search found the video is in fact computer-generated imagery from Grand Theft Auto Five (GTA5), a popular multiplayer video game released in 2013.

TikTok user @abrar.rajput, whose handle can be seen under the superimposed logo in the video, originally published the clip on TikTok here. The post includes the hashtag "gta5", a reference to Grand Theft Auto 5.

Below is a screenshot of the TikTok post with #gta5 circled in red:

A screenshot of the TikTok post with #gta5 circled in red:

A keyframe reverse image search on Yandex also found other clips from GTA5 that correspond to the video seen in the misleading posts.

This 2015 YouTube video, for instance, shows a car doing stunts and passing under the same bridge as the plane. The YouTube video was posted by a user named FrasxGames Z and has an Arabic caption that translates as: "A strong round of Hulla game GTA5". 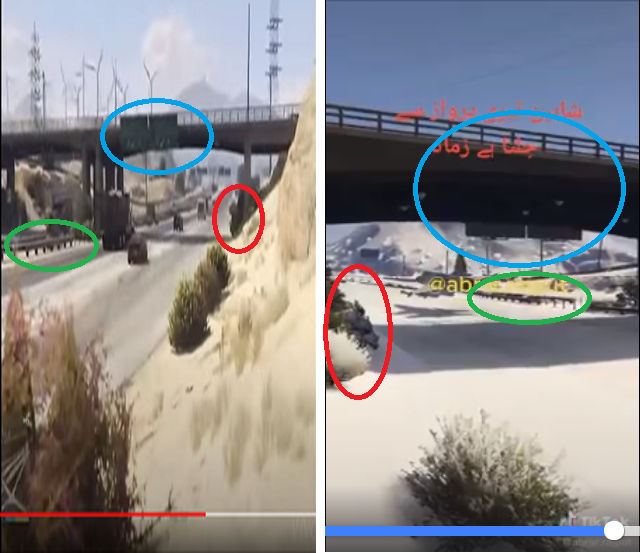 A closer analysis of the video in the misleading posts also confirms that it is computer-generated imagery (CGI).

At the 12-second mark, the bushes seen at the roadside remain motionless despite the jet's movement. In a real scenario, the jet's motion would likely create a gust of wind, impacting nearby objects.

At the two-second mark, a moving car can be seen on the same road, suggesting the video does not show an organised military exercise.

Below is a screenshot of the CGI car seen in the misleading video circled in red: 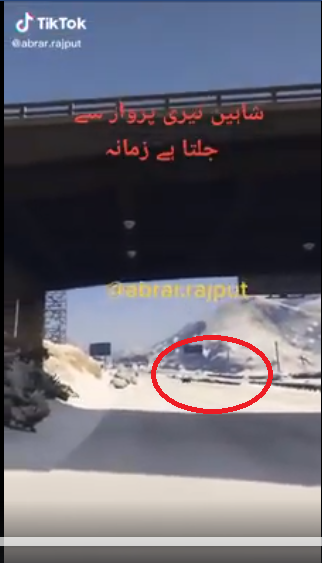 Claim :   Video shows a Pakistan Air Force pilot flying a JF-17 fighter plane under a bridge.
Claimed By :  Facebook posts
Fact Check :  False
Pakistan India India-Pakistan War GTA-V Grand Theft Auto V GTA JF-17 fighter plane Pakistan Air Force Fighter Jet
If you value our work, we have an ask: Our journalists work with TruthSeekers like you to publish fact-checks, explainers, ground reports and media literacy content. Much of this work involves using investigative methods and forensic tools. Our work is resource-intensive, and we rely on our readers to fund our work. Support us so we can continue our work of decluttering the information landscape. BECOME A MEMBER
📧 Subscribe to our newsletter here. 📣You can also follow us on Twitter, Facebook, Instagram, Youtube, Linkedin and Google News