Six photos have been shared hundreds of times in multiple Facebook posts alongside a claim they show the "rare sight of a white elephant". The claim, however, is misleading; the photos show an elephant that was covered in white ash in order to resemble a white elephant that features in Hindu mythology.

The photos were published on Facebook here on August 6, 2020. The post has been shared more than 400 times.

The post's Sinhala-language caption translates to English as: "The rare sight of a white elephant". 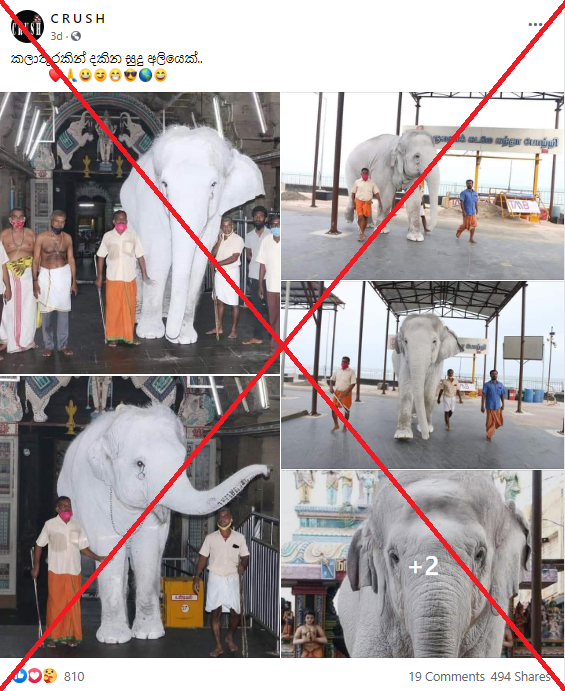 Some Facebook users appeared to believe that the elephant was a real albino elephant, posting comments such as "beautiful" and "look at what a vision it is!"

Another Facebook user noted that "such animals belong in the jungle," as seen in the comment below:

Screenshot of comments on the misleading post indicating some viewers believed it showed a real albino elephant.

A reverse image search on Google found the elephant in the photos was covered in white ash to resemble a white elephant that is featured in Hindu mythology.

The images were published here on the Facebook page of Tenkasi Times, a provincial Indian magazine, on July 29, 2020. The post states: "White Elephant was roaming in the inner light of Thiruchendur Sri Arulmigu Subramaniya Swamy Temple on the occasion of Aadi Swathi."

The post's Tamil-language caption states the elephant was covered in white ash on Aadi Swathi, a Hindu religious commemorative day, to recreate a scene in Hindu mythology that features a white elephant.

Images identical to those published in the misleading post were seen in this post from Tenkasi Times - a provincial magazine from India.

A further keyword search on Google found that the photos were also published on Twitter here by an Indian travel blogger on July 29, 2020. The tweet notes that the elephant appears white due to the application of vibhuti, a sacred ash applied by Hindu devotees.

According to mythology, lord Siva appeared today in the form of Airavat (the heavenly white elephant). So they decided to smear vibuthi (bhasma, ash) all over the elephant and parade around the temple 🤷🏻‍♀️🤷🏻‍♀️🤷🏻‍♀️
Pls don't @ me tht it is culture, hindu, temple, etc.. Poor thing!! pic.twitter.com/rcPpxQkG7Y

A closer analysis of the images also reveals the men standing next to the elephant appear to have white coloured ash on their hands. 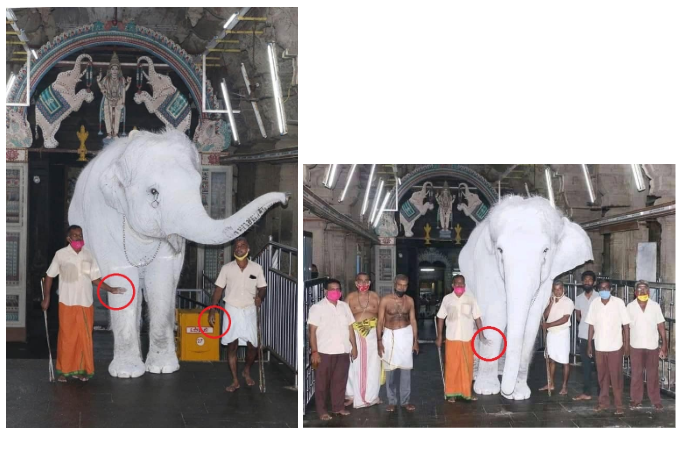 A closer look at the images also reveal that the men surrounding the elephant appear to have the white coloured ash on their hands, as seen circled in red below.

Although not a distinct species, albino elephants have been reported from several parts of Africa. Their skin, however, is not white but a brownish, pink as seen on this travel blog.

Claim :   Image shows rare white elephant.
Claimed By :  Facebook posts
Fact Check :  False
White Elephant Rare White Elephant Elephant Ash-covered elephant Airavat Thiruchendur Sri Arulmigu Subramaniya Swamy Temple Aadi Swathi Fake News Fact Check
If you value our work, we have an ask: Our journalists work with TruthSeekers like you to publish fact-checks, explainers, ground reports and media literacy content. Much of this work involves using investigative methods and forensic tools. Our work is resource-intensive, and we rely on our readers to fund our work. Support us so we can continue our work of decluttering the information landscape. BECOME A MEMBER
📧 Subscribe to our newsletter here. 📣You can also follow us on Twitter, Facebook, Instagram, Youtube, Linkedin and Google News