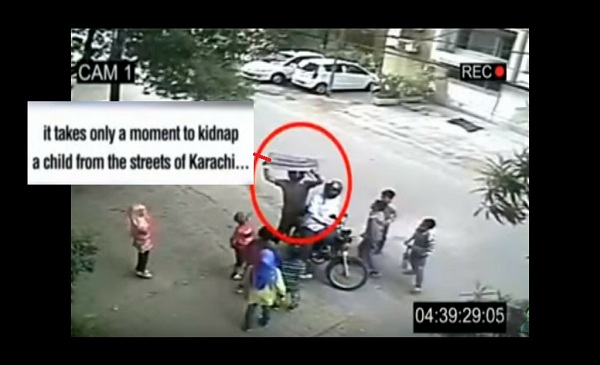 "We have been absolutely appalled by how this video has been misused and the tragic consequences which have followed," a Pakistani advertising agency responsible for creating the video told BOOM.

The mischievously edited video originally created to spread awareness about missing children in Karachi, Pakistan has been used among other false images and videos to fuel rumours of child kidnappings in India.

The video purports to show CCTV footage of two motorcycle borne men kidnapping a little boy in broad daylight. In India, the video was maliciously cropped to end where it shows the men ride away with the boy. However, the original video makes it painfully clear that it was not even real. It was meant to be a reconstruction of a kidnapping to spread awareness about how easy it is to abduct an unsupervised child from streets of Karachi. The ad was created for an NGO called Roshni Helpline that was started for the protection of children and women from all forms of exploitation such as trafficking, abuse, sexual violence.

The video posted on Roshni Helpline's Facebook page has been viewed over 3.3 million times and has received over 63,000 shares.

BOOM was the first to bring out the truth behind the original video in our fact-check written in May 2017. An email to Roshni Helpline, at the time went unanswered. However, earlier in the week we got in touch with Spectrum Y&R, the ad agency behind the video. While Spectrum Y&R did not specifically respond to BOOM's request for an interview it provided the below Q&A.

BOOM is reproducing the Q&A provided by a spokesperson for Spectrum Y&R and Roshni Helpline, with minor edits for brevity.

1. What is the background to the video? When was it made and what was its purpose?

The video was created in 2016 by Spectrum Y&R for Roshni Helpline, an NGO for missing children in Karachi, Pakistan. It was part of a larger campaign to highlight the issue of missing children in Karachi, as a result of which 10 children were reunited with their families. This video was created to address parents and caretakers, raising awareness of how quickly children can be taken, and the need for more care in safeguarding children. Every year about 3000 children go missing in Karachi alone, so responsibility starts with the caretakers. (More information on 'Kites for Hope' is available here.)

2. When the video was originally released what were the results.

The full video was released in 2016 on social media and shared over Facebook, also receiving widespread mainstream media coverage, bringing attention to the issue of missing children. See the original here.

Q3. How has the video has been used in India?

We have been absolutely appalled by how this video has been misused and the tragic consequences which have followed. The clip used in the Whatsapp messages in India has been edited to remove the context and messaging. It shows CCTV footage of a child being snatched by two men on a motorbike. What it hides (which is in the original video) is the two men returning to the spot and placing the child back. One of the men then holds up a sign that reads, “It takes only a moment to kidnap a child from the streets of Karachi.” It also contains the text that states, “Every year, over 3,000 children go missing in Karachi, Pakistan. Keep an eye on your child.”

4. How do you feel about how the video has been used in India?

Unfortunately, Roshni Helpline is not the first or the last organisation to have its content distorted by unscrupulous elements. This was a public service video by an organisation that is engaged in remarkable work. It is distressing to say the least that it has been edited and used for malicious purposes with tragic results. We request the public at this point to be vigilant and follow the new norms of verifying content that appears on social media. A search online would reveal its source and appropriate context. We also don't want the abuse of this video to detract from the very serious issue of missing children in India or Pakistan. Children are the future of a peaceful life between our great nations and it is reprehensible that this video

has been used to create chaos and sow distrust in the public.

5. How can the misuse of content be prevented in future? What are the steps we can take?

The original Roshni Helpline video was edited and used for malicious purposes without its original context or meaning. This could be done with any piece of content available online, including any piece of television, sound-clip or image, which is almost impossible to prevent. What we can do is raise awareness that not everything that people see on social media is reliable and should be taken at face value. As we have seen over the past few months, fake news is a serious issue, and more awareness raising around this could dramatically change the responses people have to these kinds of social media posts, which will be key in preventing tragedies like this from happening again. The focus now should be on finding those who are responsible for misusing this content and bringing them to justice.

Child Kidnapping Lynchings Child Kidnapping Rumours India Karachi missing children Pakistan Roshni Helpline Spectrum Y&amp;R
If you value our work, we have an ask: Our journalists work with TruthSeekers like you to publish fact-checks, explainers, ground reports and media literacy content. Much of this work involves using investigative methods and forensic tools. Our work is resource-intensive, and we rely on our readers to fund our work. Support us so we can continue our work of decluttering the information landscape. BECOME A MEMBER
📧 Subscribe to our newsletter here. 📣You can also follow us on Twitter, Facebook, Instagram, Youtube, Linkedin and Google News 📝Stay updated with all our latest fact check stories.