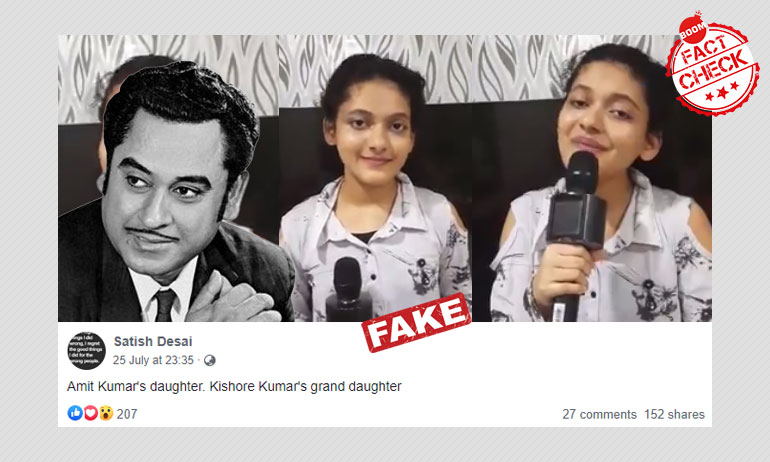 A video of a Mumbai-based singer Ananya Sabnis, where she reprises the song Deewana Huwa Badal from the film Kashmir Ki Kali, is viral with Sabnis being misidentified as singer Kishore Kumar's granddaughter. The video has been doing the rounds on Facebook with the caption, "Kishore Kumar's 14 yrs.old grand daughter Muthika Ganguly (Daughter of Amit Kumar)."

The same video was received on BOOM's helpline number for verification as well. Netizens have bizarrely found resemblance of the singer with Leena Chandavarkar, Kumar's former wife. 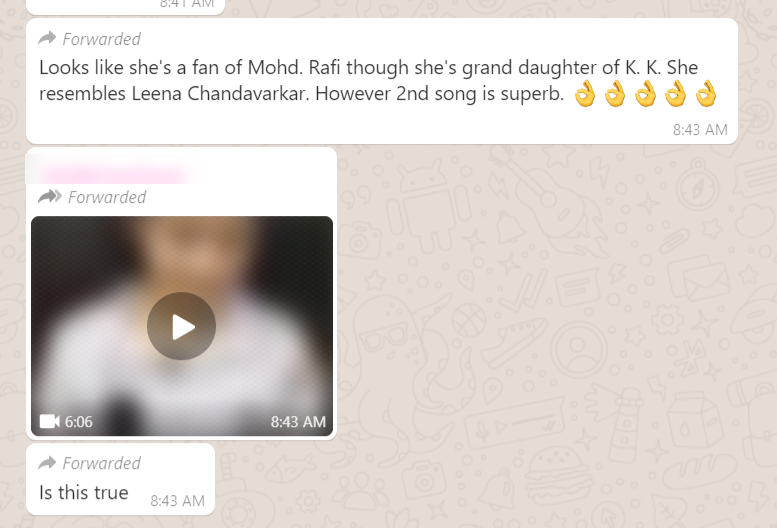 ALSO READ: No, The Girl Yodeling In A TV Show Is Not Kishore Kumar's Granddaughter

In another misleading footage, a video of singer Geetanjali Rai performing devotional songs at a satsang was shared with netizens incorrectly identifying her as one - Musthafa Parvez, veteran singer Mohammed Rafi's daughter. BOOM had found that none of Rafi's daughters are named Mustafa Parvez.

Several users called out netizens for misidentifying the singer as Kishore Kumar's granddaughter and identified her as Ananya Sabnis, a Mumbai-based singer.

We then looked up Sabnis on Facebook and found her social media pages. According to the description on Sabnis' official page, she is a professional stage artist. The same video has been shared from her Facebook page and has garnered more than 4 lakh views.

BOOM reached out to Sabnis' music teacher, Usha Timothy, who further identified her as Ananya Sabnis. Timothy said, "Ananya is my student. She has been taking music lessons from me for the past five to six years. She is still in school and is known for her beautiful voice in the music fraternity in Mumbai."

We also reached out Sabnis' mother Manisha Mainkar Sabnis, who corroborated the same. According to Manisha Sabnis, Ananya has been singing and posting her videos on social media for over two years now. "It is weird that people have suddenly identified her as Kishore Kumar's granddaughter."

Muktika made her musical debut in 2015, along with her father Amit Kumar. She launched her album Baba Mere in 2015. Below is a video of the album launch.