A set of two images - one showing a woman posing topless and another circling the image of Jamia Millia Islamia student Ladeeda Farzana is being shared on several right-wing Facebook pages with a false claim that it shows one 'Sabina Bano of Shaheen Bagh'.

Ladeeda Farzana, whose image is part of the disinformation spreading online, confirmed to BOOM that the photo showing a woman posing topless, is not her. "I am going to take legal action against this kind of sexual connotation," she said.

Jamia students Ladeeda Farzana and Ayesha Renna shot to fame after a video of them standing up to police and intervening to save their fellow student from being thrashed, went viral on social media last year during fierce protests against the Citizenship Amendment Act.

"First things first, I am not Sabina Bano as identified in the viral posts, I am Ladeeda Farzana. This vulgar act has come with no shock to me as the Sangh Parivar and its supporter have always used this kind of attack against the dissent," Ladeeda Farzana, a student at Jamia Millia Islamia University, said.

"A similar incident happened with Safoora Zargar lately. I have decided to face this harassment legally and bring the perpetrators before the law. This must stop and stringent actions are the only remedy otherwise we do not know who'll be the next target?," she told BOOM.

BOOM ran a reverse image search on Yandex which showed the image existed on other websites.

Note: Following the publication of the story, the woman whose image was misused contacted BOOM and told us that she is a victim of a cyber crime herself as her photo was used without her consent. BOOM has removed all references and links in the story which can reveal her identity.

We pursued a reverse image search. It led us to an article published by The News Minute on December 22, 2019. The article identifies both the women in the photo as Ladeeda Farzana and Aysha Renna - students of Jamia Millia Islamia University, Delhi.

Also read: Jamia: How A Rumour On Social Media Found Its Way To News18 India

"The meeting was held at Darussalam, the headquarters of the All India Majlis-e-Ittehadul Muslimeen (AIMIM), where the students shared the stage with Hyderabad MP Asadauddin Owaisi. Ladeeda Farzana and Aysha Renna, called for building a bigger movement to free the country from 'fascist forces', as thousands who had gathered cheered them on, waving massive national flags and holding up photos of Dr B R Ambedkar and copies of the Preamble to the Constitution of India," the article reads. 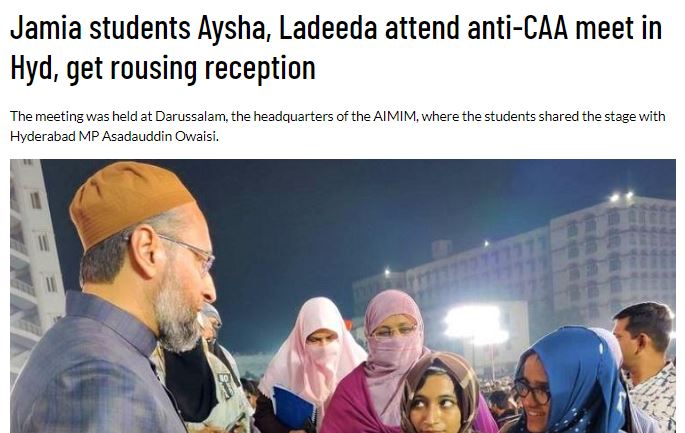 Furthermore, we found a Twitter handle of Aysha Renna. She had shared photos from the meeting with Asaduddin Owaisi in Hyderabad tagging Ladeeda. The post consists of the same photograph that is viral.

Had the honour of speaking at the public gathering at Darussalam, Hyderabad along with @asadowaisi @ladeedafarzana @AmanWadud

(Editor's note: This story has been updated to remove all references to the anonymous woman in the story)