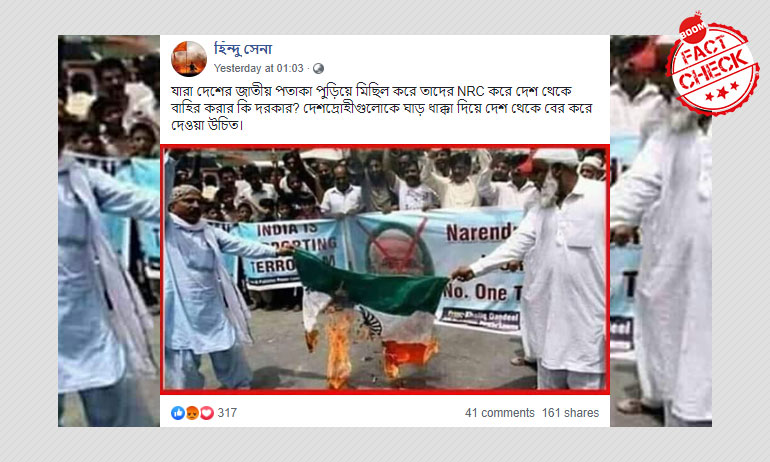 An image of protesters burning an Indian flag in Pakistan has resurfaced with claims that it is from India, and is being falsely linked to the nationwide protests against the Citizenship Amendment Act (CAA) and National Register for Citizens (NRC).

The image shows protesters holding a burning tricolour and banners featuring a photo of Narendra Modi. The protesters have been falsely identified as anti-CAA sloganeers. The caption of the photo, when translated from Bengali reads, "What is the need to oust people who burn the national flag and hold rallies, from the country via the NRC? The anti-nationals should be kicked and exiled from the nation."

BOOM found that the photo is from Pakistan's Multan, where people were protesting against the Narendra Modi's anti-Pakistan comments in 2015.

The image was earlier viral as Muslims protesting against the new Citizenship Law in Shaheen Bagh, Delhi.

BOOM ran a reverse image search and found that the image was clicked during a protest against Narendra Modi's anti-Pakistan statements in Multan on June 11, 2015.

The photograph was taken by international wire agency Associate Press' (AP) photographer Asim Tanveer. You can see the image on AP's website here.

The image was captioned as, "Pakistani protesters burn an Indian flag during a protest in Multan, Pakistan, Thursday, June 11, 2015. Pakistan has reacted angrily to comments made by the Indian prime minister that reportedly acknowledged Indian forces had a role in the war that created Bangladesh, part of Pakistan until 1971 when separatists won independence after a war. (AP Photo/Asim Tanveer)"

According to reports, Prime Minister Narendra Modi, on his visit to Bangladesh, accused Pakistan of creating 'nuisance' and raised concerns of the growing trouble of terrorism from the latter. He was addressing at a gathering in Dhaka University, Bangladesh.

Modi reportedly spoke about the role of India in the creation of Bangladesh in 1971, the erstwhile East Pakistan. Pakistan, in turn, said that PM Modi's statements aimed at creating hatred against it and souring ties between Pakistan and Bangladesh.