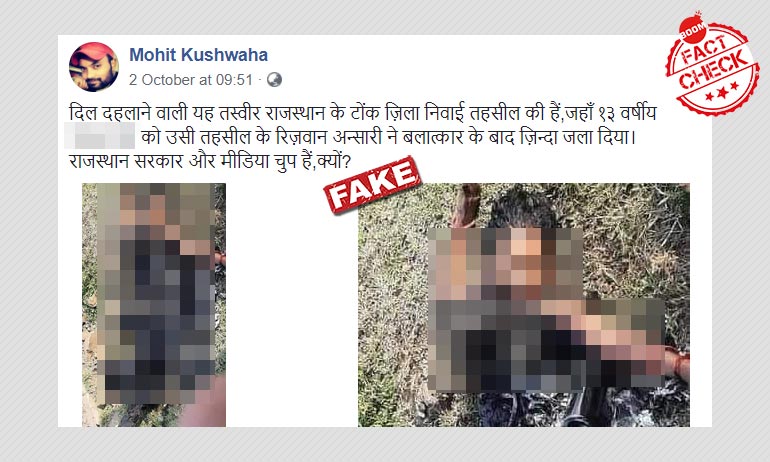 A graphic photo of a charred body of a woman found in Madhya Pradesh is being shared with a false communal claim that a minor girl was raped and burnt to death in Tonk district in Rajasthan.

BOOM found that the incident is from Dhar district in Madhya Pradesh where a woman identified as Kesarbai was murdered and her body later burnt by two men over an alleged money dispute. BOOM spoke to Dhar Police who rubbished any communal angle to the incident and stated that the two accused in the case have been arrested and identified as - Govind and Sohan

The photo is being shared in the backdrop of an alleged gang rape and murder case of a young Dalit woman in Hathras, Uttar Pradesh that has made national headlines.

The viral photo is being shared with the caption which when translated reads, "This shocking picture is from Tonk district Niwai tehsil of Rajasthan, where 13-year-old Payal Jain was burnt to life after being raped by Rizwan Ansari of the same tehsil. Rajasthan government and media are silent, why?"

On searching with the same caption on Facebook, we found that the viral image was being shared with the false claim.

We found that the incident is from Gandhwani in Dhar district, Madhya Pradesh, where a woman's charred dead body was found behind a primary school on September 29, 2020.

We also found a video report by Asianet News Hindi, which reported the police as naming the murder accused - Govind and Sohan. The video report has the same visuals as in the viral photo and further has a statement by the Superintendent of Police, Aditya Pratap Singh who states that the woman was allegedly killed by the accused over a dispute.

BOOM then contacted Superintendent of Police, Aditya Pratap Singh, who dismissed any communal angle to the incident and stated that both the accused are not Muslims. "Both the victim and the accused are tribals from Hindu religion. The victim's name is Kesarbai and the two accused names are Sohan and Govind. One accused, Sohan has been arrested, whereas Govind is absconding," said Singh

Singh further denied any rape or sexual assault angle to the case stating that "It is a case of murder. All are Hindu tribals and there is no Hindu-Muslim angle in the case." He added that one of the accused Govind was in a relationship with the woman and they had a fight over a sum of Rs 80,000.

BOOM has previously fact-checked unrelated photos being shared as rape and murder cases, as a set of photos of a female Punjab Police constable who was killed in a road accident were being shared online falsely claiming that she was raped and murdered.